A sculpture that has impaled at least two birds on its spike at Christchurch’s Botanic Gardens will be altered to stop further deaths, the artist said.

David McCracken’s Diminish and Ascend staircase was installed in the middle of a lake at the gardens in 2016, and is designed to create the illusion of a stairway leading from the lake into the sky.

Auckland-based McCracken said he had been told two seagulls had flown into the end of the sculpture – the point where the staircase and the sky meet – and impaled themselves on the spike. 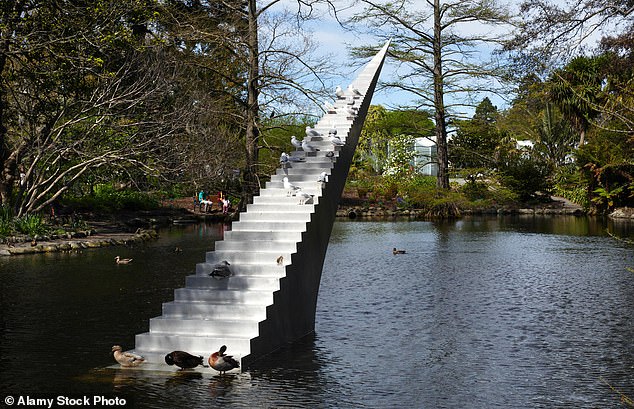 ‘It’s not really the image you want – dead birds bleeding down the end of the sculpture,’ he told the New Zealand news website Stuff.

‘If somebody has a photo of it I’d really like to see it.

‘I can only assume the birds flew straight at it and were not able to see it. Obviously I have to do something about it.’

McCracken said one solution would be to remove the welded aluminum tip, replace it with soft silicone and paint it to match.

The eye-catching sculptural installation was created in 2014 and uses perspectives to create the optical illusion of a never-ending staircase.

It was brought to the Christchurch Botanic Gardens in 2016 as part of the Scape public art season, and before that it had been on show in Sydney and on Waiheke Island. 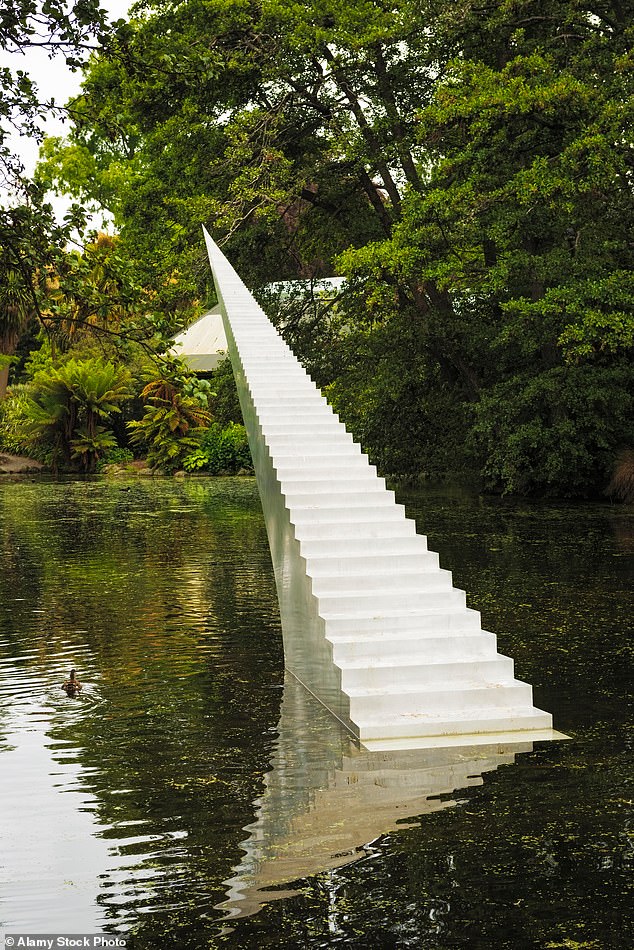 The local council voted to make it a permanent feature of the garden’s lake on Thursday.

However, Stuff reported that some Councillors were concerned at the steep cost of maintaining the $192,000 piece, which will be between $700 and $760 a month as contractors must wade into the middle of the lake twice a week to waterblast the artwork and remove bird droppings.

The fund is part of the council artworks budget, but the high cost of ‘Diminish and Ascend’ maintenance comes at the expense of other pieces, according to the council citizens and community principal advisor Brent Smith.

Cr Tim Scandrett said although the piece had been a gift to the council, it was in danger of becoming a ‘poisoned chalice’.

Remote Controlled: ‘This Is Us’ Creator and Star Mandy Moore Tease ‘Exciting’ Season 3