Home » World News » Girl, 15, dies after speedboat crashes into a buoy near Southampton

Girl, 15, dies after speedboat crashes into a buoy on a marina near Southampton as 12 more people on board are taken to hospital

A teenager has died and eleven others were taken to hospital after a speedboat crashed into a buoy this morning during choppy conditions.

A 15-year-old girl was pronounced dead in hospital after the collision in Marchwood Marina, Netley, near Southampton at around 10.10am.

Two others were flung into the water, suffering minor injuries, but the teenager, who was on the charter boat with members of her family, suffered fatal impact injuries as a result of the high speed crash.

A passing pleasure boat rushed to the scene, followed by lifeboats, and casualties were ferried ashore before being taken to Southampton General Hospital for treatment. 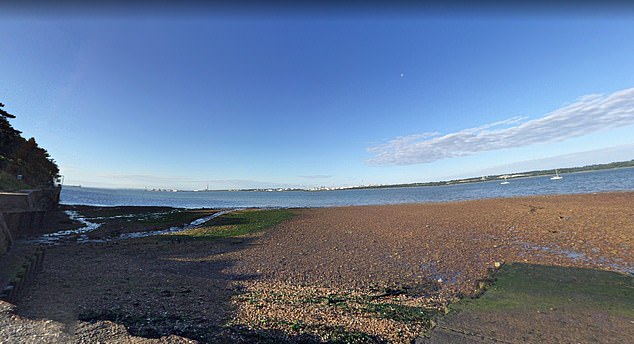 A 15-year-old girl was pronounced dead in hospital after the collision in Marchwood Marina, Netley (pictured), near Southampton at around 10.10am

Tragically the girl, who had been conscious when she was taken ashore, later died in hospital of her injuries.

The girl’s next of kin have been informed and are being supported by specialist officers from Hampshire Constabulary.

An RNLI spokeswoman tonight said: ‘It was a tragic accident which happened around one of the navigation buoys off Netley at the top of Southampton Water.

‘It was very windy out there but the pleasure boat that went out there was very capable.

‘As a result of a coming together of the RIB and the buoy, 12 people had to be rescued – some were walking wounded and some were fine.

‘Two people were flung into the water. The girl was not one of those but there are ramifications of crashing into anything at speed and she suffered impact injuries.

‘She was with family who were relatively unharmed.

‘The girl was extracted by a private pleasure boat which was first on the scene and she was conscious at the time.

‘Lifeboats attended and people were taken ashore and then taken to hospital by ambulance.

‘My understanding is that the boat had left Southampton and was doing a trip out on the water for an hour or so before it was due to return.’

It is understood that the girl and her family got on the boat at Ocean Village Marina in Southampton, but it is not known where the girl is from.

Hampshire police tonight said it had launched an investigation in conjunction with HM Coastguard and the Marine Accident Investigation Branch.

A Hampshire Constabulary spokesman said: ‘We are working alongside the Coastguard and Marine Accident Investigation Branch following a collision between a RIB and a buoy in Southampton Water off Netley, at around 10.10am this morning.

‘Twelve people who were on board were subsequently taken to hospital.

‘Sadly, one of the passengers, a 15-year-old girl, was pronounced dead in hospital.

‘The girl’s next of kin have been informed and are being supported by specialist officers from Hampshire Constabulary.

‘Enquiries into the circumstances remain ongoing and we would ask anyone who witnessed the incident, or perhaps captured footage of it, to please contact police.’

A HM Coastguard spokeswoman said: ‘Three lifeboats, a Coastguard Rescue Team and the Ambulance Service were all called to assist.

‘There were some injuries and the 12 people who were on board were taken to shore and handed into the care of the ambulance service. Marine Accident Investigation Branch have been informed.’

National Guard troops could remain in DC until Fall 2021

Traumatized female McDonald’s worker, 17, beaten by brick-wielding thugs ‘because she refused to give them free food’ – The Sun