Plenty of proposals happen near the sea, the sand and sun making for a romantic venue for a once in a lifetime moment, but one fiance has taken it a little further.

Stefan Cahill popped the big question to Heidi Mason on at Brean Down, Somerset after getting sand artist Simon Beck to create a 250-ft wide, swirling design on the beach featuring the huge letters ‘Will you marry me, Heidi?’ in the centre of a heart.

Stefan had encouraged his unsuspecting girlfriend of four years up onto Brean Down for a walk and it was then that the lettering started to be completed on the beach below as the Birmingham couple watched on. 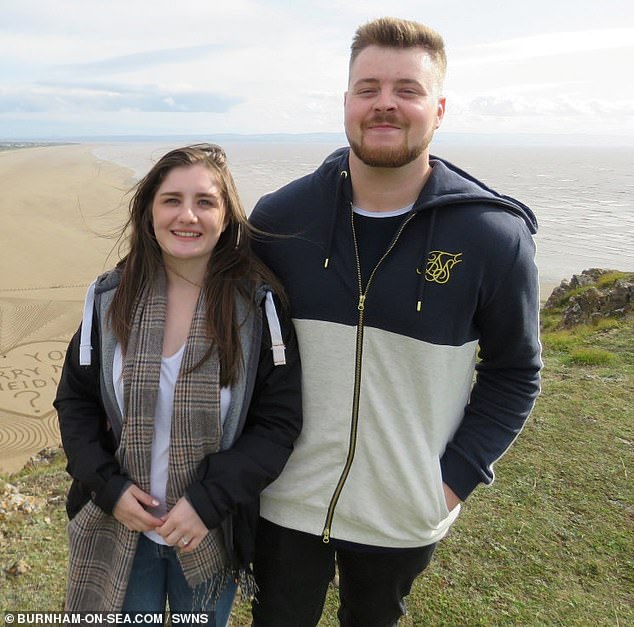 Stefan Cahill and Heidi Mason have been coming to Brean Down for years to admire the sand art frequently left in the sand, on this occasion Stefan’s reasons were a little more personal

Stefan said: ‘We’ve been coming to Brean on holiday for years and I’ve been following Simon’s amazing sand art designs for a long time. We always love them.’

‘I always like to do different and original things, so when I got thinking about how to propose to Heidi I came up with the idea of getting Simon’s art involved.’

Stefan contacted the sand artist over social media and he was more than happy to be involved in such a touching gesture.

Stefan said: ‘Heidi had no idea about what I had planned and needed quite a lot of persuading to go up onto Brean Down for a walk on a windy day. She knew nothing!’

‘Heidi was quite emotional as we watched the wording appear in the middle of the heart design on the beach below – it was a special moment.

‘She said yes, and I gave her an engagement ring to make it official.’ 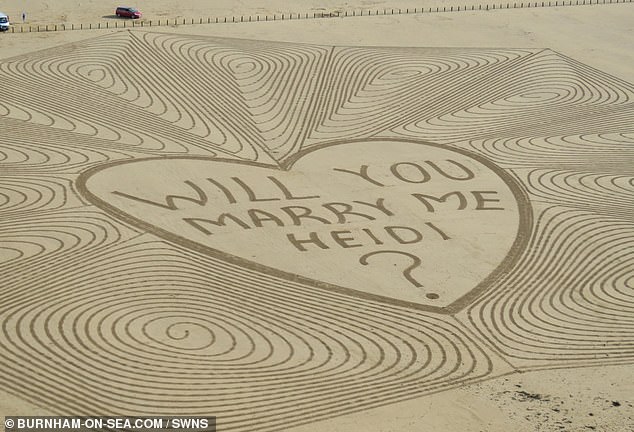 A beach-side proposal: The massive swirling design spanned 250ft each line pulled by a single man, Simon Beck, to create the romantic masterpiece

‘Simon did an awesome job with the design, having spent all day creating it in the sand with his rake. It was just perfect and I can’t thank him enough!’

Heidi said: ‘I am a little bit speechless – I had no clue at all. It was such an amazing way to propose!’

‘We’ve been coming to Brean for years so it has a special place in our hearts – this was just wonderful.’ 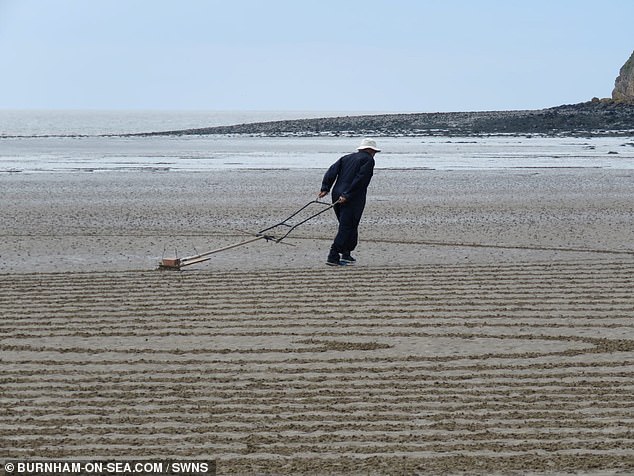 Simon was already working on the design when the two arrived, spelling out the big question right before Heidi’s eyes

Stefan and Heidi are now eagerly planning their wedding.

Brean Down is often home to Simon Beck’s, which regularly  attracts tourists and bystanders to the shoreline to marvel at his creations.

In May he completed his 100th sand art design and has also recently published a book featuring some of his art designs in snow.

Lauren Alaina Shares Duet With Jon Pardi ‘Getting Over Him’