Home » World News » Goats milk from Down Under: Australian company secures approval to send baby formula to the US

An Australian baby formula company has sealed a mega deal to send millions of tins to desperate parents in the United States, with President Joe Biden spruiking the deal on Twitter himself.

Bubs Australia manufactures its goats milk formula at a Dandenong factory in Melbourne’s south-east. Founder and chief executive Kristy Carr started the business in 2006 from her kitchen table in Sydney’s northern beaches. 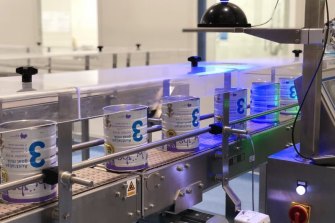 The company secured approval from the US Food and Drug Administration (FDA) on Saturday morning (AEST), allowing the company to export six of its infant milk formula products to the US to help fill the country’s dwindling shelves.

The dire shortage of baby formula across the US has affected predominately hypoallergenic varieties, with reports of parents driving for hours to try and find nourishment for their babies.

About 500,000 tins are ready to be sent to the US from Bubs Australia’s Melbourne factory, with another 750,000 being produced for export in the coming months.

The FDA announced last week that it was relaxing some importation rules for infant formula to deal with the shortage. Previously, 98 per cent of the baby formula consumed in the US was made within the country.

Carr said she was proud of the “substantial deal” secured with the Biden administration, calling it “a turning point for Australia”.

“We were actually the first infant formula manufacturer in the world to submit our application to the FDA under this new infant formula enforcement discretion policy,” she said. “This was a very unique opportunity.” 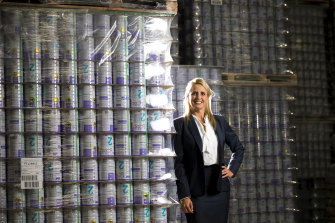 Bubs Australia CEO Founder, Kristy Carr, is proud to be able to help the US through their baby formula crisis. Credit:Chris Hopkins

Carr said Bubs Australia already distributes formula for toddlers in the US, meaning the company had already been through many of the rigorous regulatory processes required to export products to the US. She said it would otherwise have taken up to three years to gain FDA approval.

The US’ baby formula crisis evolved after a major manufacturing facility in Michigan was closed in February following reports of rare Cronobacter sakazakii bacterial infections in four infants, worsening a shortage that began with pandemic supply-chain issues.

“This week, we’re seeing reports of up to 70 per cent of brands out of stock [in the US],” Carr said. “This is something that the Biden administration and the FDA are all taking very, very seriously and are pulling out all measures to be able to rectify the situation very quickly.”

If a baby is not breastfed their sole source of nutrition for their first four to six months of life comes from the formula they consume.

“Not being able to have access to it has caused an incredible wave of alarm amongst families [in the US], as you can imagine,” she said. “I think it’s a really important time for an Australian quality food manufacturer that is clean and safe and [has a] reliable supply chain to be able to step up and help relieve some of those shortages.”

The US has not been the only country facing extreme shortages, however. In 2018 and 2019, Australian parents struggled to purchase formula with fears the products were being purchased and on-sold for profit overseas, particularly in China. Some major supermarket chains placed purchase limits on the product, causing difficulties for families with multiple babies.

Some Australian parents still struggle to access the correct baby formula for their children, particularly for those who have allergies or digestive sensitivities.

In March, Novalac Allergy Infant Formula was out of stock for eight weeks. Aptimal Allepro Syneo Stage 1, a formula for babies with a cow’s milk protein allergy, was out of stock from January until supply began to return to normal in April.

But Bubs Australia has promised that the redirection of baby formula will not affect supply levels in Australia, stating it has the capacity to triple production at the Dandenong factory to cover the formula export demand.

Carr said Australia experienced some issues with supply chains, as every industry did during the COVID-19 pandemic, but not the kind of crisis faced in the US.

“Bubs has had no supply issues at all to service the Australian market,” Carr said. “We have a firm inventory forecast and cover for our Australian retail customers and other export markets, and that’s to remain unchanged.”

After seeing President Biden’s tweet, Carr said it was a “lovely surprise”, but she was also aware of how important it was to Biden and his administration to ease the shortage.

“I’ve been on Washington timezone for over a week now. Many of my team members have been with me well into the nights and weekends to go through this process. It goes all the way to the top because it’s that big of an issue.”

Behati Prinsloo Defends Victoria's Secret Fashion Show: Let's 'Not Make It About Anything'