Nicola Gobbo’s claim she was mistreated during the royal commission has been dismissed as mystifying by the inquiry’s top lawyer, who suggests the barrister-turned-informer is experiencing an "air of unreality".

In his final opportunity to sway the findings of the Royal Commission into the Management of Police Informants, counsel assisting Chris Winneke, QC, has responded to accusations by Ms Gobbo and Victoria Police that the 18-month legal proceeding has been irrevocably damaged by the "bias" and "preconceived narrative" held by his legal team. 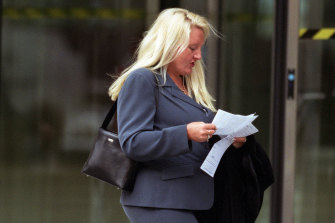 Nicola Gobbo claimed she was denied the time and resources to prepare for the commission.Credit:Vince Caligiuri

The 280-page written submission began with a rebuttal of what Mr Winneke called "disingenuous" claims by Ms Gobbo that she was denied the time and resources to prepare for the commission, was unfairly treated while testifying and that counsel assisting failed to give her evidence due weight compared to others.

"There is an air of unreality to Ms Gobbo’s allegation of prejudgment and to her complaint about being singled out for unfavourable treatment," Mr Winneke responded. 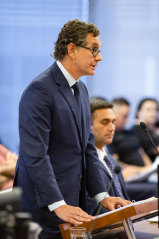 In a rebuttal to Ms Gobbo's claims that medical problems preventing her appearance at the royal commission were unduly challenged and she was given only two days to prepare before testifying, Mr Winneke noted she first received a notice to appear in February 2019 but did not take the stand until February 2020 after lengthy negotiations and postponements.

"It was entirely appropriate for an inquiry to be made concerning the veracity of evidence about her medical conditions," he said. "Ms Gobbo herself later agreed with the proposition that she was a 'spectacularly good liar'.

"It must also be recalled that shortly after instructing her counsel that she was not fit to give evidence, she gave a lengthy interview with the Australian Broadcasting Corporation [in December 2019]."

Ms Gobbo has been represented by a top-notch legal team that includes Peter Collinson, QC, barrister Rishi Nathwani and solicitors from Minter Ellison, funded entirely by the state government.

Mr Winneke also dismissed as baseless the claim Ms Gobbo was disadvantaged by the apparent "closeness of the relationship between the commissioner and counsel assisting".

"Ms Gobbo’s submits that on one occasion the commissioner mistakenly referred to one of counsel assisting by their first name. It is not known whether this in fact occurred. However, assuming it did, it is mystifying how that could be said to demonstrate anything untoward," Mr Winneke wrote.

He also highlighted the inconsistency between Victoria Police’s mea culpas for the Gobbo scandal and its submissions attacking the conduct and conclusions of the royal commission process and lawyers.

"Individual members have admitted that serious mistakes were made, and Victoria Police as an organisation has admitted systemic failures.

"However, they then seek to walk a delicate tightrope. When issues of individual responsibility are raised those parties seek to caricature the ascribing of any such responsibility as 'hindsight reasoning', 'confirmation bias' or evincing a 'preconceived narrative'.

"One cannot help but be concerned that such complaints are made, at least in part, to elide individual responsibility and attempt to frame public opinion and diminish the findings and recommendations of this commission."

Commissioner Margaret McMurdo is due to hand down her final report on November 30.

Princess Diana: Why did Diana always carry handbags in THIS way? The touching reason

Fleeing Eagles and a crowd-surfing Boss: Hanging 10 at the Rock