In Sydney, stories about the government funding a “major cost blowout” of a few extra billions on the Metro project were almost enough to shift the focus from house prices.

At least that’s what I was told at a recent social gathering, immediately before the question was posed: “If the private sector isn’t taking on the financial risk of big infrastructure projects, why involve them at all? As a taxpayer, why bother?”

It’s not a great conversation for a post-lockdown barbecue, but it is indicative of a growing concern among taxpayers that, despite governments outsourcing more and more infrastructure projects to the private sector, it falls to the public purse when things go wrong. 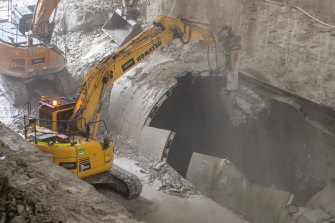 Excavators breaking through at the bottom of the Metro at Sydney’s Central Station.

So why bother? Clearly, as an industry, we haven’t done a great job of explaining the benefits the private sector brings to public infrastructure. It should never have become a public versus private debate.

The reality is good infrastructure necessarily involves both the public and private sectors. When the system works well, the government acts as the board of directors. It’s up to it to set the direction and determine what the public needs. The private sector then steps in to provide the workforce, finding the best way to deliver the product and the best people to do it.

No government can house world-leading tunnel engineers, traffic forecasters and acute-care design experts. The breadth of infrastructure managed by governments is immense. It is efficient to draw on the expertise of the private sector to bring new ways of thinking that reduce risk and costs and, most importantly, drive the best possible outcomes for the taxpayer based on the identified needs. The private sector brings expertise and insight that spans beyond any one government or geography.

The private sector is then better placed to assume and manage the bulk of the risks associated with their solution. It’s not a complete risk transfer but nor should it be – certain risks will always remain with the government. Political risk, certain inherent project risks, the costs associated with changing needs and the ultimate responsibility for public services will always belong to the government.

One of the first arguments against private sector involvement is always that governments can raise money more cheaply. That ignores the significant amount of risk that is transferred. The government makes a promise to repay government bondholders even if the project is a disaster. No such promise is made to private sector financiers, who are asked to look to the project for repayment.

The best evidence of the value of this risk transfer is found in our cities’ project failures. It was the early investors who bore the brunt of disastrous traffic volume modelling in the early years of Sydney’s Cross City Tunnel. After the initial uproar, the private sector has ironed out the teething problems at the Northern Beaches Hospital. The cracking in Melbourne’s CityLink tunnel was resolved at the private sector’s expense. The list goes on and the bigger and riskier the project, the more important it is to share the risk beyond government.

So why bother involving the private sector? To unlock innovation and improved results, transfer some financial risk and improve the management of that risk. Or to put it in real terms, because the groundbreaking Victorian Comprehensive Cancer Centre would not be a landmark if the government’s reference design had been delivered, nor would we have seen the transformative vision for the Sydney Metro Martin Place Precinct, or the iconic architecture of the Sydney Opera House.

David Donnelly is partner and head of infrastructure at Allens. The Sydney Morning Herald Infrastructure Summit is being held at ICC Sydney, Darling Harbour, on Thursday, April 29.

‘It could blow up our lives’: Why I hide messages sent by my best friend

Meghan Markle ‘would love to have children’, close friend claims