Death toll: English and German governments unite to call for every church in the world to ring its bells to mark the 100th anniversary of the armistice

British and German governments have come together to appeal to churches worldwide to ring its bells in unison on Armistice Day to mark the 100th anniversary of the end of the First World War.

Thousands of bellringers at more than 3,000 towers including churches are expected to let their bells ring out on Armistice Day – the day the war ceased after more than four years of fighting.

And the joint project by the governments is now trying to encourage more church, military and other bells to be rung in unison on November 11. 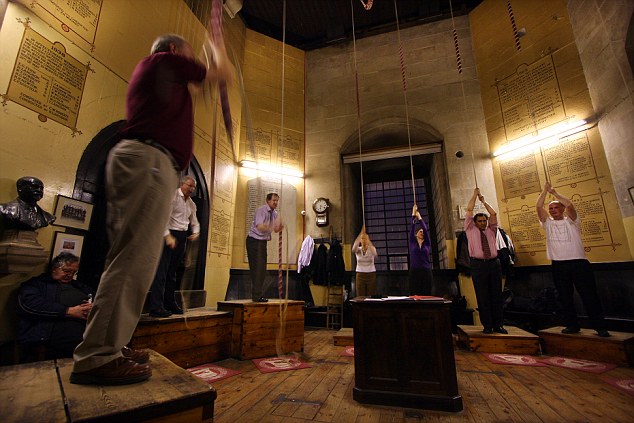 British and German governments have come together to appeal to communities to ring their bells in unison on Armistice Day. Stock image of bellringers at St Paul’s Cathedral

Speaking to the Observer, culture secretary, Jeremy Wright, said the project between the two governments ‘would be an appropriate way to draw to an end, in sound, more than four years of commemorative events’.

He said: ‘Bells will ring out across the world to replicate the outpouring of relief that took place in 1918, and to mark the peace and friendship that we now enjoy between nations,’ he said.

‘It will be a fitting culmination to our First World War commemorations. One hundred years on, we will come together to remember all those who lost their lives – regardless of nationality.’ 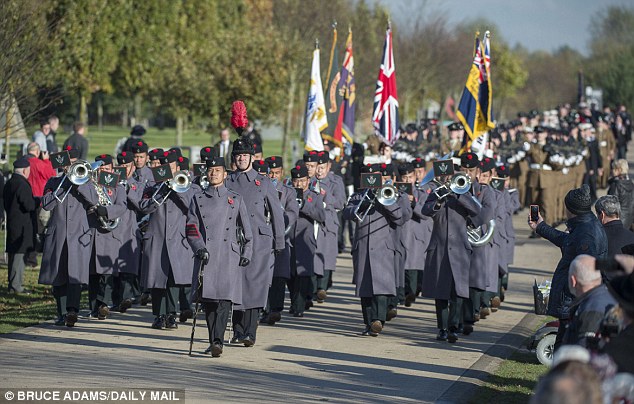 Pictured, a stock image of an Armistice Day Service in Alrewas, Staffordshire

Previously, the US Centennial Commission made a similar plea for communities across America to take part in the celebrations.

On Armistice Day, bells countries which observe Grenwich Mean Time (GMT) and Central European Time (CET) are scheduled to ring their bells at at 12.30pm GMT  and 1.30pm (CET).

While other countries in the rest of the world are invited to ring them at either 12.30pm GMT or 12.30pm local time.

Christopher O’Mahony, president of the Central Council of Church Bellringers, said the sound of bells pealing in the UK would change from a sombre and solemn ‘half-muffled’ one in early morning to a more celebratory tone, similar to a wedding, at 12.30. At midday we will take the muffles off the bells and at 12.30 it will be more about celebration. The national mood swings then to gratitude, gratefulness and thanks.’

Between 1914 and 1918 bellringing was limited as a result of regulations introduced under the Defence of the Realm Act.

Many men departing to the front-line also meant that church bells were not rung often.

As so many men were on the front-line on the day the war ended, bells were not rung well, according to accounts from the time.

The initiative aims to recruit 1,400 bellringers in time for Armistice Day, the same as the number lost in the war.

Who are the Gilbey family on Gogglebox? Pete, George and Lynne star on the hit Channel 4 show

What time is Grand Designs on Channel 4 tonight and what’s new in series 18?