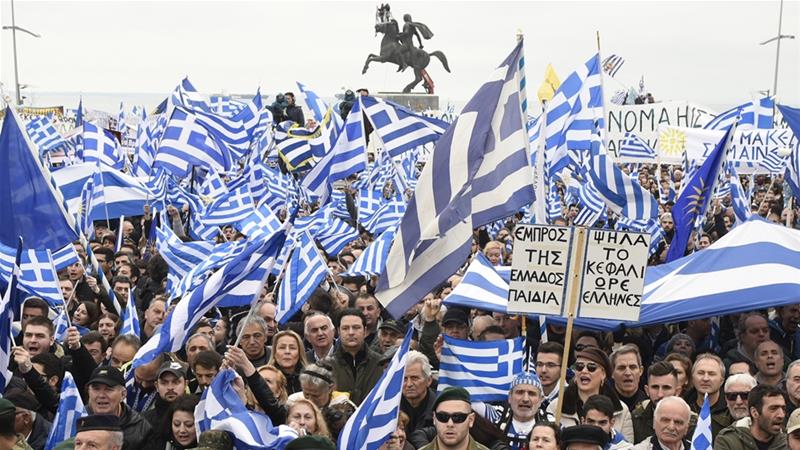 Far-right violence gripped a northern city in Greece after hundreds of thousands of nationalists took to the streets for a protest.

Greek far-rightists on Sunday burned down a building used as an activist squat in the northern city of Thessaloniki.

The violence took place after a rally staged in opposition to negotiations over a name dispute with Greece’s northern neighbour, Macedonia.

No injuries were reported.

The far-right group also attacked a nearby squat known as “The School”, but were confronted by anarchists and anti-fascist activists who pushed them back, witnesses wrote on Twitter.

A statement later posted on Athens IndyMedia, an anarchist news site, called for a “an immediate, militant mobilisation” against far-right attacks.

Ignoring a plea not to attend, members of the right-wing New Democracy party also turned up.

Sunday’s rally was held in opposition to the use of the name “Macedonia” in any agreement struck between the two countries.

For many Greeks, Macedonia refers only to a province of northern Greece and accuse Skopje of having territorial designs over that region.

On the other hand, leaders in Skopje maintain they have a historical right to the name.

The country, which has an estimated two million citizens, was part of the Socialist Federal Republic of Yugoslavia until that country’s breakup. Macedonia declared independence in 1991.

Greek opponents to the deal insist only calling the neighbouring country the Former Yugoslav Republic of Macedonia (FYROM), the name by which it joined the United Nations in 1993.

Right-wing and far-right parties have accused the Greek government, currently headed by the left-wing Syriza party, of betraying the country.

Tsipras has expressed flexibility in negotiations over the name dispute.

“It’s totally groundless historically and absurd to seek the exclusivity of Macedonia,” Tsipras said on Sunday, as reported by the Greek-language Ethnos newspaper.

“But it is not unreasonable to have the term ‘Macedonia’ included in a compound name, with either a geographical or a chronological qualifier, for all uses, to make absolutely clear that nobody claims other people’s land or history.”

The UN oversaw talks between the two countries last week, but a solution has yet to be reached.

Sunday’s incident comes amid an apparent uptick in far-right violence targeting migrant labourers and refugees, mostly Muslims, across the country.

Last week, a far-right group known as Crypteia – believed to be a breakaway from Golden Dawn – issued death threats to the Muslim Association of Greece and other civil society groups.

Earlier this month, the Athens-based activist group Keerfa announced that a spate of anti-immigrant attacks had seen more than 30 homes of Pakistani migrant labourers attacked in fewer than two weeks in Piraeus, a port city adjacent to the Greek capital.

The Bachelor Spoilers: Could This Be the Most Disastrous Season Finale EVER?!

R. Kelly's brothers name the man they say abused the singer as a child