Hranitne, Ukraine: Artillery shells fired by Russian-backed separatists shrieked into this small town deep in the flatlands of eastern Ukraine, shearing branches from trees, scooping out craters, blowing up six houses and killing one Ukrainian soldier.

It was an all-too-common response to the smallest of provocations — a dispute over grocery shopping for 100 or so people living in the buffer zone between the separatists and Ukrainian government forces. But in the hair-trigger state of the Ukraine war, minor episodes can grow into full-fledged battles.

Hunkered down in a bunker, the Ukrainian commander, Major Oleksandr Sak, requested a counter-strike from a sophisticated new weapon in his country’s arsenal, a Turkish-made Bayraktar TB2 armed drone. 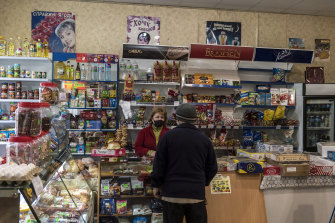 Olga Kotesova serves a customer, some of whom live in a buffer zone between separatists and Ukrainian government forces, at her small shop in Hranitne, Ukraine.Credit:Brendan Hoffman/The New York Times

Deployed for the first time in combat by Ukraine and provided by a country that is a member of the North Atlantic Treaty Organisation, the drone hit a howitzer operated by the separatists. Things quickly escalated.

Across the border, Russia scrambled jets. The next day, Russian tanks mounted on rail cars rumbled towards the Ukrainian border. Diplomacy in Berlin, Moscow and Washington went into high gear. 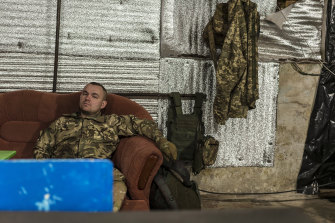 Major Oleksandr Sak, who requested a drone to target a separatist unit firing 122-millimeter artillery guns at an unfinished new bridge, rests at a Ukrainian Army base in Hranitne.Credit:Brendan Hoffman/The New York Times

The sudden spike in hostilities last month underscored the tenuous nature of the ceasefire that exists along the 450-kilometre front in the Ukraine war. It set off a new round of ominous warnings from Moscow, and highlighted Russian President Vladimir Putin’s willingness to escalate what is known as hybrid conflict, a blend of military and other means for creating disruption — including exploiting humanitarian crises like the current one on the Polish-Belarusian border.

The drone strike in Hranitne also raised fears in Western capitals that Russia would use the fighting as a pretext for a new intervention in Ukraine, potentially drawing the United States and Europe into a new phase of the conflict.

“Our concern is that Russia may make the serious mistake of attempting to rehash what it undertook back in 2014 when it amassed forces along the border, crossed into sovereign Ukrainian territory, and did so claiming falsely that it was provoked,” US Secretary of State Antony Blinken said last week.

The battle came at an increasingly volatile moment in the conflict. This northern autumn, commercial satellite photos and videos posted on social media have shown that Russian armoured vehicles had massed near the Ukrainian border; Ukraine’s President Volodymyr Zelenskyy has estimated the build-up at 100,000 troops. And Russian rhetoric towards Ukraine has hardened.

Amid this heightened tension, the drone strike in particular became a flash point for the Kremlin. Alarmed that Ukraine possessed this highly effective new military capability, Russia called the strike a destabilising act that violated the ceasefire agreement reached in 2015.

Putin has twice in the past week pointed to the drone attack as a Ukrainian escalation, justifying a potential Russian response. He raised the issue in a phone call with Chancellor Angela Merkel of Germany.

Asked on Saturday about accusations from Washington that Russia was massing troops on the Ukraine border, Putin responded by criticising the United States for supporting the drone strike, as well as for conducting a naval drill in the Black Sea, which he called a “serious challenge” for Russia.

“A sense is created that they just aren’t letting us relax,” he said. “Well, let them know we are not relaxing.” 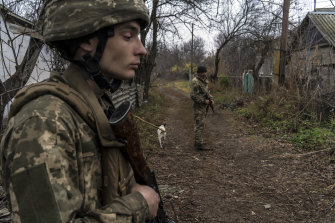 Putin has long made clear that he views Ukraine as inseparable from Russia. In July he published an article outlining that doctrine, describing Russia and Ukraine as “essentially” one country divided by Western interference in the post-Soviet period, an apparent justification for Russian-Ukrainian unification. Russia has already annexed Ukraine’s Crimean Peninsula.

“We will never allow our historical territories and people close to us living there to be used against Russia,” he wrote.

Hacking, electoral meddling, energy politics and the recent migrant crisis on the border of Belarus and Poland have all strained ties between the West and Russia. But nowhere are the tensions more overt than in this conflict zone that cuts through villages and farmland, where opposing soldiers — one side backed by the United States, the other by Russia — face off.

Russia intervened militarily in Ukraine after street protesters deposed a pro-Russian Ukrainian president in 2014. Moscow sent soldiers wearing ski masks and unmarked uniforms to the Crimean Peninsula, whipping up the rebellion in the east in two separatist enclaves, the Donetsk and Luhansk people’s republics. 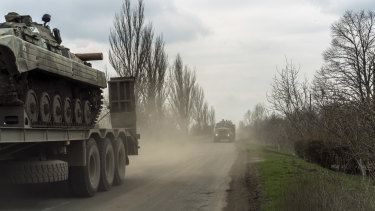 Ukrainian Army convoy near Khlibodarivka in eastern Ukraine on Monday, April 19, 2021. Russia has built up a force of 100,000 at the border.Credit:Brendan Hoffman/The New York Times

The frontline in the war is sometimes called a new Berlin Wall, a dividing line in today’s geopolitics. It is an eerie realm of half-abandoned towns, fields and forests.

It is also a tinderbox that requires only a match to spark new hostilities. In late October, the buffer zone near Hranitne provided one.

In most places along the front, a scant few hundred metres separate two trench lines. But in some areas, including Hranitne, the gap widens to a few kilometres, and people live in between the two armies, in a no-man’s-land known in Ukraine as the “grey zone”. Residents must cross the Ukrainian trench line to shop and send their children to school, protected by an uneasy truce. Residents are aware of the danger, but are too poor to move.

“It’s scary,” said Oleksandr Petukhov, a retiree as he cleared the last checkpoint one recent day carrying a bag of cheese and eggs. “This is a ridiculous situation.”

In Hranitne, the access point for shopping on the Ukrainian side is a footbridge over the Kalmius River, a slow-moving flow of inky green water. Ukrainian soldiers peek out from above sandbag parapets as shoppers trickle across the bridge. 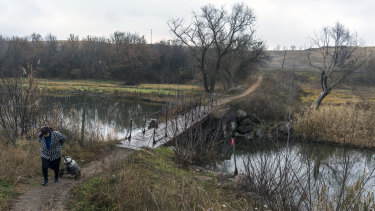 A footbridge crossing the Kalmius River in the town of Hranitne. It’s the access point for shopping for about 100 people living in the nearby buffer zone.Credit:Brendan Hoffman/The New York Times

The troubles began about a month ago when separatists closed a checkpoint on their side — where residents also travelled for shopping — for unclear reasons, possibly as a coronavirus precaution.

In response, on October 25, Volodymyr Vesyolkin, the administrator of Hranitne, a position akin to mayor, led a contingent of about a dozen soldiers across the footbridge. The same day, the military laid concrete blocks for a new bridge about 700 metres away that would be accessible for vehicles.

His motive, Vesyolkin said, was humanitarian: to assure locals of access for shopping and deliveries of coal for winter heating.

“How can it violate anything?” Vesyolkin said in an interview. “This is our village. These are our people. They walk several kilometres to buy groceries.” 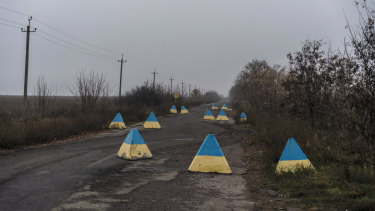 Concrete barriers in the yellow and blue of the Ukrainian flag, near a military checkpoint outside Hranitne, Ukraine.Credit:Brendan Hoffman/The New York Times

The separatists interpreted it otherwise — as a land grab — and soon their artillery shells filled the air.

Even Ukrainian military officers concede a misperception was possible. “They maybe thought we would send heavy weapons” across the new bridge, Sak said.

Through the night and into the next morning, a separatist unit with 122-millimeter artillery guns fired toward Ukrainian forces in what is known as a shoot-and-scoot manoeuvre intended to skirt counterattacks by the enemy.

In total, the separatists fired about 120 rounds at the unfinished new bridge, but every shot missed. They hit nearby houses instead, destroying one with such force that it appeared turned inside out, with a pile of concrete blocks covering the street.

Sak said he requested the drone strike because it was the only weapon that could hit the manoeuvring enemy artillery and because civilians were in danger, though none were hit.

“Only modern weapons allow us to halt Russia’s aggression,” he said.

Most military analysts say flare-ups in Ukraine are more a pretext for strategic sabre-rattling than a cause. But they are sparks in an already dangerous world, and the West remains on high alert this week as Russia takes an increasingly bellicose stance toward Ukraine.

When the fighting in Hranitne subsided, the villagers emerged with at least one small victory: they finally got their groceries.

Two days after the drone strike, separatists opened their checkpoint, allowing the Red Cross to deliver 22-kilogram boxes of food to each house. The boxes held rice, sugar, sunflower oil, macaroni, flour and cans of meat and fish.

Tatyana Yefesko, an elementary schoolteacher, said she appreciated the delivery. But it was hardly a long-term solution.

“Any small flare-up could turn into a big war,” she said. “Everybody asks, ‘Why did this happen? Who needs this?’ I don’t know. But history shows us every big war started with something small.”

You Probably Missed These 2 Amazing 2018 Movies, But They’re Now Streaming On Amazon Prime