Half of Britons with tell-tale Covid-19 symptoms may NOT have the disease, study suggests

Half of Britons with tell-tale coronavirus symptoms such as a fever and persistent cough may not actually have the disease, a study has suggested.

Public Health England (PHE) researchers looked at 1,000 key workers who thought they had recovered from Covid-19 over summer after suffering the disease’s most common symptoms.

But 49 per cent of the participants tested negative for antibodies in their blood — proteins that signal a person has previously had the virus.

However, this may be an underestimate of those who had actually infection because there are other parts of the immune system that fight the virus — like T cells — which are not detectable with tests.

Most people mount an antibody response. But antibodies wane over time, so might not show in tests.

The findings, therefore, suggest a large proportion of people who apply for a test are not actually carrying the coronavirus, which could spell trouble for the winter months when common colds become more prevalent.

But despite this, health chiefs stressed people should still come forward if they have symptoms. 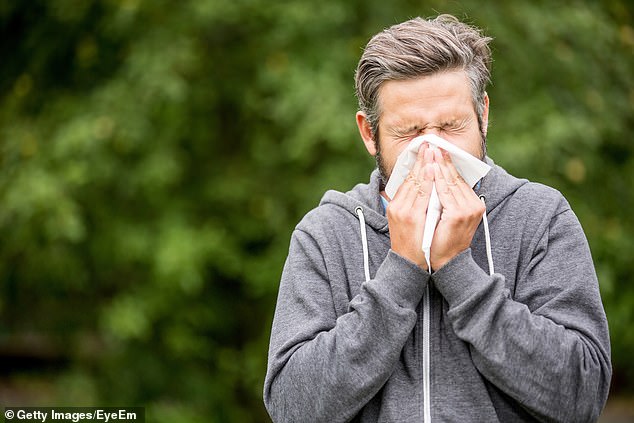 Half of Britons with tell-tale Covid-19 symptoms such as a fever and persistent cough do not have the disease, a study has suggested (stock)

Ranya Mulchandani, a field epidemiologist fellow at PHE and the study’s lead author, said: ‘In the course of this study, we tested just under a thousand people who thought they had had Covid-19 due to compatible symptoms.

‘We found that half of them lacked any evidence of having had the infection, testing negative for the presence of antibodies.

‘This was also true for a substantial number of frontline health workers.

‘Although these findings are still subject to peer review, it is possible that a large number of people in the general population incorrectly believe that they have already had Covid-19.

‘It is crucial that people do not get complacent and continue to observe government health advice, including social distancing and good hand hygiene, even if they think they have been infected in the past.’

Two studies from the Netherlands have today helped reveal why older people and men are more at risk of severe Covid-19, even if they are healthy.

The majority of people who catch Covid-19 will suffer a mild respiratory infection, if they even develop any symptoms, and recover in a few days.

However, the disease can progress and become fatal by causing severe acute respiratory distress syndrome (ARDS) in around 10 to 15 per cent of cases.

The fatality rate of Covid-19 increases sharply with age, with top scientists estimating that it kills more than 20 per cent of patients over 80 years of age.

And men have been shown to die more often than women, accounting for at least two-thirds. But the exact reason for this has remained a mystery.

It’s been discovered over the course of the pandemic that those who become sick more often have a hyper-active immune response. It leads to healthy tissues and organs failing as a result.

But it was not clear whether this was caused by the coronavirus itself, or was related to an underlying set of risk factors in some groups of people.

They looked for 28 inflammatory markers that have been linked with Covid-19 severity and the levels of immune cells.

Many of the inflammatory markers were correlated with age in healthy individuals, essentially meaning they increase as a person ages, regardless of their health.

For example, Interleukin-6, a marker of inflammation and severe Covid-19, increased with age in both cohorts. IL-6 provokes inflammation in the body, and has been shown to be a predictor of which Covid-19 patients end up needing mechanical ventilation.

At the same time, there was a drop in critical immune cells, such as white blood cells, which are crucial for fighting off the virus in the first place.

‘Therefore, some of these dysregulations might not be a direct result of the infection but rather an underlying profile that is permissive to a more severe form of the disease.’

In the second study, Radbound University Medical Center researchers tried to answer why males are more susceptible to develop severe infections than women.

They compared men and women in two healthy Western European cohorts to see whether immune parameters connected with Covid-19 severity vary between the sexes.

They detected and quantified the levels of 96 circulating proteins, and also the white blood cell population.

Professor Netea said: ‘We identified several circulating inflammatory proteins and cell populations which might be behind the higher susceptibility of males to develop severe infection and Covid-19 disease.’

It was found that molecules involved in inflammation, including monocyte chemoattractant protein-1 (MCP-1), that were high in healthy males are also more prevalent in patients in the intensive care unit.

This indicates that immune mediators that contribute to a more severe Covid-19 infection are already intrinsically higher in males.

The authors conclude: ‘Sex is one of the major factors which influence our immune system response.

‘Our results suggest that differences between the sexes in the baseline characteristics of the immune system… might explain the predisposition of males to develop severe Covid-19 infection.’

Both studies were presented at the virtual ESCMID Conference on Coronavirus Disease today.

Some 1,546 healthcare workers at six acute NHS hospitals and 1,147 workers from two police and fire and rescue sites across England were group A and B.

The third group, group C, were 154 healthcare workers who had previously had a positive test for Covid-19.

They were used as the control group to assess the strength of the antibodies used in the study.

The Roche Elecsys and EUROIMMUN tests had 96.6 per cent and 93.3 per cent sensitivity respectively, meaning between 93 and 96 of 100 people who have the virus get a positive result back, and the rest get a negative one.

Participants were asked if they thought they had suffered Covid-19 in the past based on their symptoms over the course of three months.

Researchers compared this with the results from antibody testing, considered to be highly accurate.

However, the researchers found that 466 (49 per cent) of the 943 individuals tested negative on antibodies, suggesting ‘it is very unlikely they had had Covid-19’.

Their symptoms would have been due to other conditions or viruses.

But it was summer, when there are fewer respiratory viruses circulating. Therefore, in the winter months, when illnesses due to common bugs increase, including the flu, there may be even more people worried they have Covid-19.

Those testing negative typically reported that their symptoms started earlier and lasted for a shorter amount of time, compared to those who actually had antibodies.

They also were less likely to report a loss of taste and smell — a symptom of Covid-19 that took several months to be added to the official NHS list.

Key workers who did test positive for antibodies also tended to report having tell-tale symptoms when crisis in the UK took hold in March.

Another interesting finding was that of those who had antibodies, only 68 per cent reported having Covid-19 symptoms, meaning 32 per cent showed no signs.

The findings were presented at the European Society of Clinical Microbiology and Infectious Diseases Conference on Coronavirus Disease (ECCVID).

Ms Mulchandani said there is ‘potentially a high proportion of people who think they have had Covid-19’, which might have ‘significant implications going into the “second wave”.

The Health Secretary Matt Hancock has previously warned Britons to not get a test unless they have symptoms because the system is strained.

He said increasing numbers of people in England are seeking tests when they don’t have any Covid-19 symptoms, days before NHS Test and Trace lead Baroness Dido Harding said demand was ‘three or four’ times greater than capacity.

Mr Hancock said ‘inappropriate’ use of the system was making it harder for people who needed tests to get one, citing whole school year groups who had tried to get a test or people checking they are virus-free before they went on holiday.

However, it is not known if the test system has the ability to cope with the hundreds of thousands of people who will have a cough each day this winter.

At the height of the crisis in March and April, testing was restricted only to those who had symptoms and were critically ill in hospital.

Potentially thousands of people who were showing signs of the disease were never tested because of this and self-isolated just in case.

An estimated 100,000 people were being infected each day at the peak, it is estimated, which includes those who were not showing symptoms.

But testing capacity stood at around only 10,000 in the third week of March, which is when the infection rate was thought to have been at its highest.

Now, Mr Hancock believes around 10,000 people are getting infected a day, which would mean testing capacity of around 260,000 per day is generous enough to cover everybody with symptoms.

However due to the sheer number of people who get tested ‘just in case’ — which was encouraged by the Government during the summer — there are people with symptoms missing out.

The fiasco has led to a prioritisation system which puts  hospital patients, NHS staff, care home staff and residents at the top.

Today an expert claimed the UK’s coronavirus testing regime may only be picking up a third of cases in the community due to people being asymptomatic — showing no symptoms. 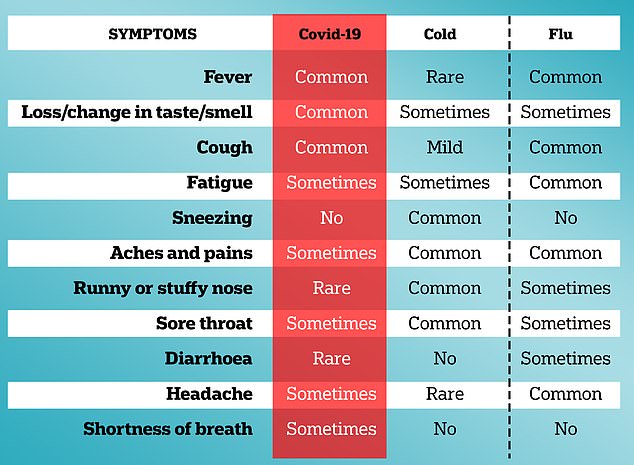 The symptoms of Covid-19 compared with the flu

Dr Tang suggested there could be up to an additional 12,000 cases not yet being identified because findings from the Real-Time Assessment of Community Transmission (React-1) study.

The true proportion of Covid-19 carriers who do not show symptoms is not clear, and only this week two published studies estimated it was just 20 per cent of people that were asymptomatic.

Dr Tang also highlighted that the React-2 study of antibody surveillance results up to the end of June indicated there were around 3.4million Covid-19 cases with antibodies to the virus in the community, whereas PCR-based testing showed only around 280,000 cases in the UK.

Dr Tang said: ‘Hence just based on these React studies alone, there are many more Covid-19 cases in the community, not being tested by PCR acutely, that can be spreading the virus.

‘This is a very worrying trend and it remains to be seen how the BAME (black, Asian, and minority ethnic) populations are going to be affected (though likely in a similar way).

‘So the more people that can comply with the all the restrictions the better we will control the virus.’