Washington: A smattering of followers of the QAnon conspiracy theory gathered near the US Capitol on Thursday (US time), the day the movement had predicted former President Donald Trump’s return to office, but they were far outnumbered by security forces deployed to deter any possible attack.

National Guard troops patrolled inside the fence encircling the Capitol, the scene of a deadly insurrection by Trump supporters that killed five people. Police had warned of a potential attack by militants to mark Thursday’s date, and the House of Representatives cancelled its session. 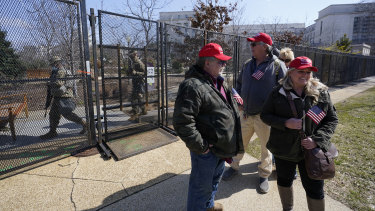 Supporters of former President Donald Trump, John Carson, of California, left, Karyn Carson, right, stand outside of security fencing around the US Capitol.Credit:AP

But around noon, all was quiet. John and Karyn Carson, who took time off work and came from California to see Trump be inaugurated for a second term, were undaunted.

“Every day that we’re here, we’ll probably come out around noon and see if anything transpires,” Karyn, 52, told Reuters. “If it doesn’t happen, we’ll obviously be sad ’cause it didn’t happen while we were here, but we believe that it will happen. It just hasn’t happened yet.”

March 4 is the day when adherents to the debunked QAnon conspiracy theory believe that Trump, who was defeated by President Joe Biden in the November 3 election, will be sworn in for a second term in office. Until 1933, March 4 was the date of the presidential inauguration.

A bulletin by US security agencies on Tuesday said an unidentified group of “militia violent extremists” discussed plans in February to “take control of the US Capitol and remove Democratic lawmakers on or about March 4.” 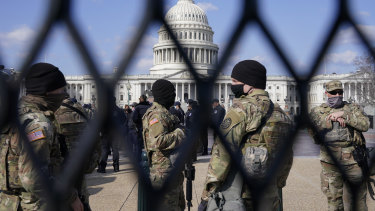 National Guard keep watch on the Capito on Capitol Hill in Washington. Credit:AP

National Guard troops – rifles strapped across their chests – chatted in small knots on the sidewalks in the bright sunshine.

While the Carsons were undeterred by the lack of activity at the Capitol, media reports said that QAnon influencers had backtracked, posting on message boards that the March 4 theory was planted by the movement’s enemies to make it look foolish.

The Carson siblings believe the presidential election was fraudulent, a claim that Trump repeated without evidence. They also think the United States has two presidents now, Trump and Biden.

The Carsons predicted the military will restore Trump to power by the end of the month. John, 58, acknowledged that belief was “from our own assumption as to what really should happen and probably will happen.” 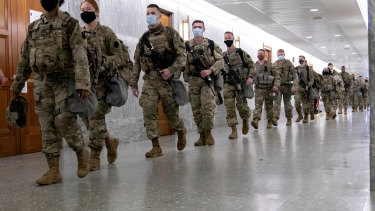 “It may seem foolish to some people that we came all this way to see something that may or may not happen, but we don’t care,” Karyn said.

Both siblings said they had no intention of trying to restore Trump to power with violence, and they deplored the deadly attack on the Capitol in January.

Federal prosecutors have charged more than 300 people for involvement in the storming of the US Capitol, including a policeman. Those arrested include members of armed militia groups such as the Oath Keepers and the Three Percenters. Trump supporters sporting QAnon flags and accessories were part of the mob that stormed the building.

The Capitol Police have asked the Pentagon to extend the National Guard’s mission in Washington for an additional two months, a US defence official told Reuters on Thursday. The mission was set to end on March 12.

The US Senate was open for business on Thursday and expected to begin debating Biden’s $US1.9 trillion ($2.4 trillion) coronavirus relief package.

Great-gran, 80, mauled by neighbour’s Rottweiler after trying to stroke pooch