New York: In the pre-vaccine pandemic days, as shutdowns dragged on, odes to the lost joys of the dance floor became a motif in media. Recollections of sweaty nights out in crowded clubs captured much of what COVID-19 had taken from us: community, freedom, gloriously messy physical proximity.

When restrictions began to loosen, teeming dance floors became a symbol of recovery around the world. At SWG3 — an arts centre in Glasgow, Scotland, that hosts some of the city’s largest dance parties — tickets for club nights sold briskly during the summer and autumn of 2021, before the arrival of the Omicron variant. “The appetite for these events has been stronger than ever, and it’s fuelled by the long period of time we were all denied it,” said Andrew Fleming-Brown, SWG3’s managing director. “We’ve missed that shared body heat experience, being packed together in a full venue.” 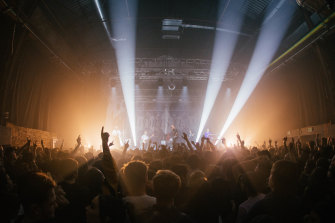 What if dance floor catharsis could be good not only for the soul but also for the planet? This month, SWG3 and geothermal energy consultancy TownRock Energy will begin installing a new renewable heating and cooling system that harnesses the body heat of dancing clubbers. The plan should eventually reduce SWG3’s total carbon output by 60 per cent to 70 per cent. And it may be replicable. TownRock and SWG3 recently started a company to help other event spaces implement similar technology.

There is poetry in the idea: the power of dance, made literal. “Conversations about sustainability can be pretty abstract,” said David Townsend, founder and CEO of TownRock. “But if you can connect it to something people love to do — everyone loves a dance — that can be very meaningful.”

A mutual friend introduced Townsend and Fleming-Brown in 2019, after Fleming-Brown expressed interest in exploring low-carbon energy systems for SWG3. Townsend, 31, is a regular on the club scene and had been to the location several times. (“You’ll usually find me right at the front of the room, always dancing, sometimes with my shirt off,” he said.) At that point more than 250,000 people were coming to SWG3 annually, Fleming-Brown said. Townsend knew from experience how large, and how hot, the crowds could get.

Many geothermal energy projects involve deep wells that tap the naturally occurring heat of the earth. But digging them can be prohibitively expensive. “Trying to do a geothermal well would have been millions of pounds,” Townsend said. “Instead, we thought, why not collect the heat you’ve already got in your customers and then use the ground to store it?”

At rest, the human body produces about 100 watts of energy. Strenuous dancing might multiply that output by a factor of five or six. Dr Selina Shah, a specialist in dance and sports medicine, said club dance floors can be especially good at creating heat. “If it’s really high-energy music, that generally results in very fast and high-energy movement, so you’re looking at a significant level of heat generation — potentially even the equivalent of running,” she said.

To capture that energy at SWG3, TownRock developed an application for an already widespread technology: the heat pump. One of the most common heat pumps is the refrigerator, which maintains a cold interior by moving warm air to its exterior. The SWG3 system, called Bodyheat, will cool the space by transferring the heat of dancing clubbers not into the atmosphere, as in conventional cooling, but into 12 boreholes approximately 500 feet deep. The boreholes will turn a large cube of underground rock into a thermal battery, storing the energy so it can be used to supply heat and hot water to the building.

Development of the system began in 2019. Pandemic shutdowns, and the financial uncertainty that came with them, paused the project for several months. But with their events calendar emptied, SWG3 leadership had time to develop a larger sustainability plan for the building, setting the goal of achieving “net zero” carbon emissions by 2025. “That moment allowed us to pause and really assess what’s important to us as an organisation,” Fleming-Brown said. “We decided to make it a priority.”

Bodyheat became a central component of the plan when work on the project resumed in 2020. The first phase of installation should be complete early in the northern spring, and will provide heating and cooling to SWG3’s two main event spaces. Later phases will offer hot water to the bathrooms and heating to the foyer and art studios. At that point, SWG3 will be able to get rid of its three gas boilers, reducing its annual carbon output by up to 70 tonnes.

The system is not cheap. Fleming-Brown estimates that a conventional heating and cooling system for a similarly sized space would cost £30,000 to £40,000 ($55,000 to $74,000); phase one of Bodyheat will require an outlay of £350,000. But the timing was fortuitous, as Glasgow’s hosting of the 2021 United Nations global climate summit created “a lot of momentum behind this kind of project,” Fleming-Brown said. A grant from Scotland’s Low Carbon Infrastructure Transition Program covered half of the costs for phase one, and a government-backed low-interest loan helped with the rest. Fleming-Brown estimates that savings on energy bills would make the investment recoverable in about five years.

While developing Bodyheat, Townsend and Fleming-Brown realised their system could work elsewhere, too. The new TownRock and SWG3 joint venture Bodyheat Club, established in November, aims to help a range of event spaces and gyms refit their buildings with some version of Bodyheat. The Berlin club SchwuZ, a British chain of gyms and the Scottish arts council, which runs a variety of creative spaces, have already expressed interest.

Townsend emphasised that the idea is not proprietary. “If we end up with other companies also trying to put in systems similar to Bodyheat to be more sustainable, that’s fantastic,” he said. “We just want to galvanise momentum around renewable heating and cooling.”

Dancing has been used to generate energy before. More than a decade ago, Dutch company Energy Floors introduced a line of tiles that convert dancers’ steps into electricity. Club Watt in Rotterdam, Netherlands, installed the tiles to media fanfare in 2008, and they have since been used in hundreds of other projects. The band Coldplay plans to use a similar “kinetic” floor, designed by British company Pavegen, during its eco-friendly 2022 tour. Townsend said that TownRock and Pavegen have been discussing a possible collaboration.

Kinetic dance floors make only small quantities of electricity. Bodyheat should have a more meaningful effect on carbon output, although broadly speaking, dancing isn’t a very efficient way to make body heat. Shah said that dance studios probably wouldn’t be great candidates for a Bodyheat-style system, because most of the dancing done there isn’t aerobic. Slow, methodical warm-up exercises, which make up large chunks of most dance classes, create little heat; vigorous movement tends to happen only in short bursts.

Gyms, with their emphasis on aerobic exercise, seem like more obvious fits for projects that harness the work of the body. Townsend mentioned that in addition to capturing body heat, gyms could use equipment like stationary bikes to help generate electricity.

Dancing may not be the best source of renewable energy, but it has proved important in another way: storytelling. There is something vaguely grim about harvesting heat from gym rats pumping away on treadmills. Energy born of dancing — born of joy — captures the imagination in a different way.

“We did not initially think that dance would be such a big part of this project,” Fleming-Brown said. “But you need a visual language to communicate an idea, and it quickly became apparent that the emotional connection people have with live music and dance was a winning streak.”

To help tell the Bodyheat story to the crowd at SWG3, Fleming-Brown and Townsend are considering ways to illustrate the amount of heat dancers create, perhaps with a large thermometer, or a heat map similar to those used on weather reports. Townsend spitballed about having competitions to see which dancer could generate the most renewable energy — sustainability as performance art.

For nightclubs, renewable energy systems might be business-friendly as well as eco-friendly options. The young clubbing demographic is particularly engaged in discussions about climate change. Natalie Bryce, 30, an SWG3 regular, said she takes a club’s greenness into account when choosing where to go dancing. “All my friends who like to go out, we all care very much about sustainability and how what we do is affecting the climate,” she said. Fleming-Brown said he’s also had DJs and other artists inquire about the organisation’s environmental policies while negotiating bookings.

Technology that depends on large crowds of people is, however, not lockdown-friendly. Fleming-Brown expressed concern about the omicron surge in Britain affecting turnout or leading to capacity restrictions, which would make Bodyheat less sustainable — particularly early on, before the system’s thermal battery has time to “charge” with clubbers’ heat. He is also simply eager to see the thing installed and functioning. “We’ve still got a system to deliver,” he said. “We’ve discussed it a lot and everything’s been really positive, but it needs to work.”

As soon as Bodyheat is ready, clubgoers — COVID-19 permitting — will be too.

“The fact that you can do some good by just having fun and doing what you love is brilliant,” Bryce said. “Is it going to encourage me to go out more? I can’t afford it, but yeah!”

Push for bots of the internet to reveal themselves