Home » World News » He paid $US30 for a drawing. It could be a Renaissance work worth millions

He tucked the drawing away in his house, where he showed it to the occasional guest, his friend would later say. Something about it was intriguing, even though he did not know where it came from. 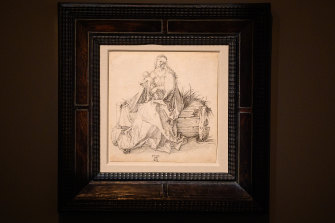 The pen and black ink drawing, titled “The Virgin and Child With a Flower on a Grassy Bench”.Credit:Getty Images

Last week, a panel of experts at the British Museum in London delivered a stunning answer: The artwork, titled The Virgin and Child With a Flower on a Grassy Bench, was an undiscovered drawing by Albrecht Dürer, a renowned German artist born in 1471.

The man, whose identity has not been revealed, had made one of the most extraordinary discoveries of Renaissance artwork in years, the experts said. The drawing might be worth tens of millions of dollars.

The declaration that the drawing was the work of Dürer – an assessment that is not universally shared among researchers – came about as a result of a chance meeting and the efforts of a dogged art dealer who amassed thousands of frequent-flyer miles tracking down an answer.

First, the meeting. The owner of the drawing was friends with Brainerd Phillipson, who runs a rare-book shop in Holliston, Massachusetts. In 2019, Clifford Schorer, an entrepreneur and art dealer from Boston, stopped by the shop to purchase a last-minute gift. 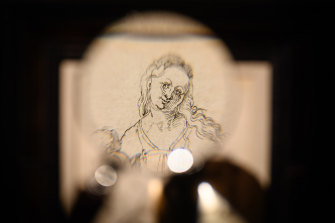 The sellers of the sketch, pictured, thought it was a reproduction.Credit:Getty Images

They started chatting about art, and then Phillipson mentioned that his friend had what they thought could be a Dürer drawing, Phillipson said in an interview this week. The initials A.D. at the bottom of the drawing were “rather a tell,” he said.

“No, you have an Albrecht Dürer engraving,” Schorer replied, as he would later recount. Engravings are usually stamped onto a paper and are quicker to make than drawings, which are more rare and valuable.

Noting that Dürer drawings are extremely rare and that he thought all were accounted for, Schorer said he told Phillipson, “As someone who knows Albrecht Dürer in and out, it’s impossible.”

Eleven days later, the owner texted pictures of the artwork to Schorer, who said he drove straight to the man’s house, where, he said, the man and his wife lived modestly. Schorer sat down at the kitchen table to look at the piece.

“It was a either a masterpiece or the greatest forgery I had ever seen,” he said.

Schorer, who specialises in recovering lost art, paid the man a $US100,000 advance to sell the drawing, he said. (The exact terms are confidential, but both will get money when it sells, he said.) Schorer would lose his advance if the work turned out to be a forgery.

Phillipson said his friend, the owner of the drawing, declined to comment.

Three days later, Schorer boarded a flight to England to rush the drawing into the hands of Jane McAusland, a paper conservator who advises museums, dealers and auction houses. She did not respond to emails this week from The New York Times.

Three weeks after his visit, McAusland told him that the drawing had been stained with tea or coffee to make it look like an antique, Schorer said. But he asked her to look again, and she replied by email the next day with an image. He clicked on it, and the picture showed a translucent light shining through the paper.

“It had the trident watermark, which is only in Albrecht Dürer’s drawings,” he said. “My mind was blown.”

Dürer’s preferred medium was a special paper made by his patron, Jacob Fugger, one of the richest men who ever lived. Only Dürer’s workshop had access to that paper, which bore Fugger’s signature watermark, according to Christof Metzger, a Dürer expert and chief curator at the Albertina Museum in Vienna. 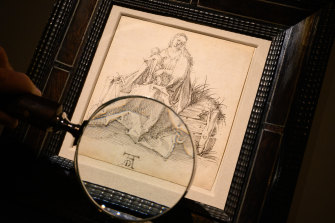 Scholars noted the signature had been written with the same ink used in the drawing.Credit:Getty Images

Schorer said he met Metzger on his tour of 14 cities around the world to try to authenticate the drawing. Over more than two years, he said, he met a slate of experts, all but one of whom agreed that the drawing was an original Dürer.

Clues like the paper, the pen strokes and the style of the Madonna suggested that this was not a forgery, Metzger said.

He dated the piece to 1503, when Dürer made a similar depiction of the Virgin Mary on a grassy bench. Metzger believes the artist was drawing ideas for a 1506 watercolour titled The Virgin With a Multitude of Animals.

The newly discovered drawing was the first “complete, finalised composition” of Dürer’s to be discovered since 1932, Metzger said.

The artist’s works have long been collected because of his mastery of both granular details and hallucinatory fantasies, Metzger said, “and for this reason, a new, absolutely unknown work is absolutely once in the lifetime.”

Not all are convinced, however, that the work was drawn by Dürer.

Fritz Koreny, a senior researcher at the Institute for Art History at University of Vienna, believes it was made by a Dürer apprentice, Hans Baldung. He declined to elaborate, because he is working on his own publication about the drawing. He said, however, “All the significant details speak for Baldung”.

Koreny estimated that if Baldung made the drawing, its value would be only up to a quarter of what it would be worth if Dürer drew it.

No matter who created it, the artwork had travelled from Germany to a noble family in Italy to the Louvre Museum and private collectors in France before it wound up in Massachusetts, Metzger said.

Jean-Paul Carlhian, an architect, took the piece to Massachusetts sometime after his family acquired it in 1912, Metzger said. At some point in the last century, the family decided the drawing was not a real Dürer, Schorer said. That is most likely how it ended up at the Carlhian family’s estate sale that the unidentified buyer of the drawing attended in 2016.

Dürer churned out piece after piece until he died in 1528. About 1500 have been accounted for, Metzger said. Only 24 are known to remain in private collections, which is what makes the newly discovered drawing so special, he said.

For now, the drawing is being housed at Agnews Gallery in London. It will be displayed next month at the Colnaghi gallery in New York.

Schorer and the drawing’s owner stand to make a significant windfall when the drawing goes on sale, probably sometime in the new year. He declined to speculate on its value, but he said it could be the most valuable work by a Renaissance master to hit the market since a chalk sketch by Raphael sold for nearly $US48 million in 2012.

Agnews Gallery plans to ask for an “eight-figure sum” for the drawing, according to a statement from the gallery last month.

Schorer has travelled the world to learn about art, but he remains astonished that the greatest piece he helped discover was found, as he put it, “in my backyard”.

“Life is downhill from that moment forward,” he said. “I’ll never have an experience like that again.”

Seven of the best summer sandals to invest in now

China launches mission to bring back material from moon