Years before she died on the descent from K2, famed mountaineer Alison Hargreaves climbed the soaring, glacier-studded Eiger with her son Tom in her womb.

That would arguably be his first climb, made before he was born into a notably adventurous family. Hargreaves was the first woman ever to summit Everest without Sherpas or bottled oxygen, in May 1995. She was killed on K2 in a rash of bad weather three months later. 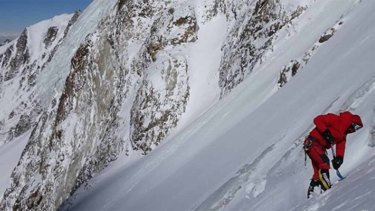 Tom Ballard followed in her footsteps at Eiger and five other major peaks in the Alps in 2015, becoming the first solo climber ever to conquer them all in one winter. Ballard was christened "the new king of the Alps," the Telegraph announced soon after.

But now, about 100 miles southwest from where his mother died, Ballard, 30, has been missing along with his Italian climbing partner Daniele Nardi on Pakistan's Nanga Parbat – nicknamed "Killer Mountain" for its row of deaths and notoriously difficult terrain on the ninth-highest mountain in the world.

They were last heard from Sunday, the BBC reported.

Pakistani army helicopters have searched the mountainside for the climbers, though inclement weather and tensions with India have strained search efforts, the BBC reported. Pakistan sealed its airspace after aerial combat over the contested Kashmir region resulted in two downed Indian jets.

An update posted to Nardi's Facebook page Friday said there was still no sign of the two climbers. 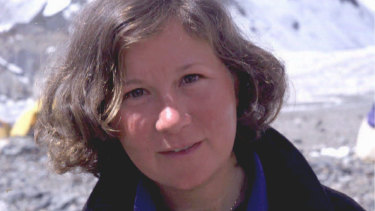 British climber Alison Hargreaves was the first woman to conquer Mount Everest alone and without oxygen on the slopes of K2 in Pakistan.Credit:AP

The search will continue if the weather allows it, said Stefano Pontecorvo, the Italian ambassador to Pakistan.

"Pakistan Army pilots made some headway today," he wrote Thursday on Twitter. "Very grateful for their total dedication. Tomorrow reinforced team should be at work. Let's hope and pray for the best."

On Friday, the ambassador said search teams were "trying to get operations going asap."

Pakistani climber Ali Sadpara was involved in the search, Pontecorvo wrote. Sadpara is the only climber to have scaled the peak in winter, the BBC reported.

The official Facebook page for Nardi, an experienced Italian climber, has said Sadpara observed signs of an avalanche in the search area. A Russian team had also intended to help, but "decided to give up due to the strong avalanche risk," according to a Friday update on Nardi's Facebook page.

Nanga Parbat, at 8,126 meters, has drawn both adventurers and rescue pilots to its slopes in recent years. Numerous deaths on the peak in the early and mid-20th century led to its nickname "Killer Mountain."

In January, Ballard and Nardi arrived at Nanga Parbat to ascend the peak on a path that has never been successfully taken, according to a statement from Montane, a British clothing company that sponsors Ballard.

"They will be hoping to climb the infamous Mummery Spur – named after Albert F. Mummery, who in 1895 led the first attempt to climb the mountain," the company wrote. He died on the mountain while scouting a path. 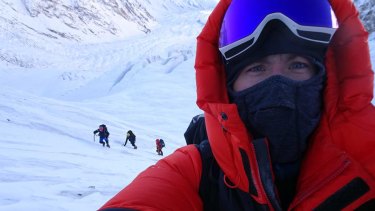 "His intended line remains unclimbed to this day," Montane said.

Ballard was about six-years-old when his mother died, and he spent his early years untangling his motivations to scale the same mountains his famous mother once climbed.

"When I was young growing up at school I always said I would climb these mountains for her. But then I realised that was a little bit silly because she had already climbed them herself. I was only doing it for myself – every day I go out there is for me," he told the Telegraph.

His father, Jim Ballard, also a climber, appeared in "Tom," a 2015 documentary about his son's emergence from his family lineage to carve his own accomplishments.

"Tom never wanted to be anything else, for as long as he can remember, but a climber," he said.

And in the film, Ballard reflected on his path. His mother, two years before her death, became the first solo climber ever to summit all six north faces of the Alps peaks in the summer, about a decade before her son did so in the winter.

"Since I was 10 all I wanted to do was to climb. Even before I was born I climbed the north face of the Eiger," Ballard said. "So I think it's not much a surprise what I do now."

The climb had already appeared arduous, even before the climbers went missing Sunday.

In a Jan. 19 Facebook photo by Ballard, a climber stopped for a rest on a snow-tipped mountainside. Snowflakes obscured his face.

"Well, what did you expect?" Ballard wrote. "It is winter on the ninth-highest peak in the world. No picnic."

Woman, 30, charged after baby hit head and died when she gave birth unexpectedly

'The Office': Why Actors Were Allowed to Improvise in Scenes