Today it’s known for its street art, but 50 years ago, Hosier Lane, off Flinders Street, was part of Melbourne’s thriving clothing district.

A sign in a 1972 photo of the bare-walled lane advertises the business of Bernard Rothschild, who sells underwear, knitwear, children's wear and hosiery. 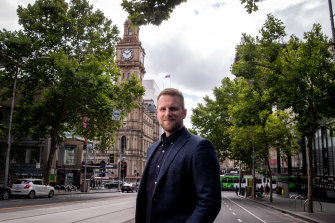 Swipe right on the photo on the Instagram page Old Vintage Melbourne, and you'll see the same view in recent years. The walls are covered in art, with a sign indicating a recent focus of the precinct: a bar called Misty.

Melbourne lawyer Chris Macheras started Old Vintage Melbourne six months ago and it has taken off, with 28,000 followers.

"It's insane," says Mr Macheras, but he is happy it's helping connect Melburnians with their history.

One comment on the Hosier Lane post states: "Wow the graffiti is so ugly … 1972 looks much better."

But another says: "I’m loving the graffiti. The laneways are so cool."

Someone called Yael Rothschild says that "the Rothschild sign was my father-in-law’s warehouse" and that he passed away just two years ago, aged 95.

"He worked so hard. He was a great man. We have this photo framed."

One of Mr Macheras' favourite historic shots is from about 1906: a Mr and Mrs Laycock pose for a photo outside their shop in Middle Park, with ads for The Age and Cadbury chocolates.

Mr Macheras was relieved to find the building still exists, although it is no longer a shop. A modern verandah has been added and its door has moved.

A circa 1870s photo of Melbourne GPO, by Charles Nettleton, shows the building with two storeys, not today's three, and a much shorter, more squat clock tower than the one added later.

Mr Macheras said that during the gold rush, large sections were often added to such buildings as Victoria’s wealth and population grew.

When he posted a 1981 photo by Rennie Ellis of a Greek family in Prahran cooking a lamb on the spit, a woman commented, "Wow this is a great photo of me and my family. We are still a very close family and we still celebrate every Christmas and Easter together."

Mr Macheras' own family has run a hairdressing salon at 216 Tyler Street, Preston, since the early 1970s. But the shop dates from the 1930s and he would love to see old photos of it.

The Old Vintage Melbourne Instagram project started in June, when Mr Macheras had more free time as a result of not having to commute from Preston to the city for work.

He discovered vivid digital photos on websites such as that of the State Library of Victoria and started digitally restoring a few.

Mr Macheras says he is allowed to use old photos for non-commercial purposes, where no copyright restrictions apply, provided credit is given.

He hopes to write an Old Vintage Melbourne book, incorporating people's stories. It has, he says, been good for his mental health to have this creative outlet.

‘‘And I have had countless messages in my inbox from people thanking me as it got them through lockdown too. It’s really nice.’’

Who is Ross Swinden in EastEnders, who plays him and what does he have to do with Ruby Allen's rape?