Most members of the “Wild Boar” soccer team have been rescued – but after more than two weeks imprisoned underground in terrifying conditions, they are not out of the woods yet.

Following initial health checks, Thai authorities have confirmed that two of the rescued soccer players are showing signs of pneumonia, but are otherwise in good health as they remain in isolation in hospital.

In the meantime, it is likely doctors will be on the lookout for a number of other health conditions as the rescue mission continues.

Otherwise known as histoplasmosis, it can be contracted by breathing in spores of a fungus often found in soil with bat or bird droppings.

Often the symptoms are mild, but it has also been known to trigger serious complications, including meningitis (a brain infection), and is especially risky for those with compromised immune systems. Often the illness doesn’t become apparent until two weeks after exposure.

Rat urine is likely to be the main culprit in the spread of this bacterial disease in Thailand, said Professor Peter Leggat from James Cook University in Queensland.

Outbreaks are usually linked to exposure to flood water. It can sometime be fatal and cause serious disease including kidney failure and jaundice.

Professor Leggat said as it was likely the soccer team had drunk the water in the cave, the possibility of leptospirosis was worth considering. 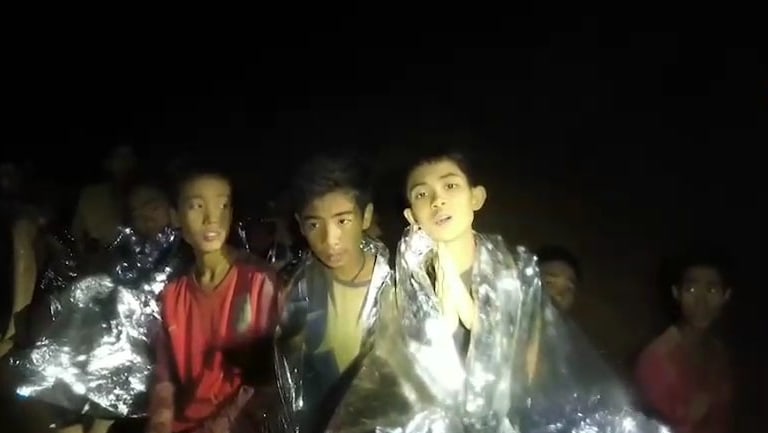 Some of the trapped boys in the cave in Tham Luang.

The tropical disease is caused by germs that live in wet soil and enter the body through cuts and scratches.

Common symptoms include a fever and difficulty breathing. It can also be fatal.

“Thailand is one of the hotspots for melioidosis,” said Professor Leggat. “Certainly water would help bring that to the surface so I think it's justifiable they could be a little bit concerned.”

Although very rare, Associate Professor Simon Reid from the University of Queensland’s School of Public Health said that “bat rabies” or lyssavirus was also a risk for the group.

“Generally you have to be scratched but there are concerns that just exposure to bat droppings can put you at risk,” Professor Reid said.

Once the symptoms of rabies have begun there is no treatment. The illness progresses rapidly to paralysis, delirium, convulsions and death.

The rescued boys will probably have trouble sleeping and settling back into a routine as they recover from their “acutely traumatic” experience, said Professor Ian Hickie with the University of Sydney’s Brain and Mind Centre.

But how deeply affected they remain in the long term will probably depend on whether the rest of the team is able to get out safely, and if they are able to resume a relatively normal existence once the attention dies down, he said.

Thai authorities have so far been shielding the boys from the intense glare of the global media.

“The danger here for kids who are individually dragged into the limelight is that their whole life becomes about this one particular misadventure,” Professor Hickie said.

“I think the Thai authorities' emphasis on privacy and trying to deal with the group as a whole is actually a very mature one, assuming the families are intimately involved.”

Own a Sony Xperia, Google or Huawei phone? You won’t like this news one bit