It is probable cases of an extremely rare blood clotting disorder seen in Europe’s AstraZeneca rollout are simple random chance, rather than a sign of a problem with the vaccine.

Professor Timothy Kleinig, head of the stroke unit at the Royal Adelaide Hospital and a global expert on the clotting disorder – cerebral venous sinus thrombosis (CVST) – says there is no evidence from animal studies or clinical trials that the vaccine causes clotting problems. 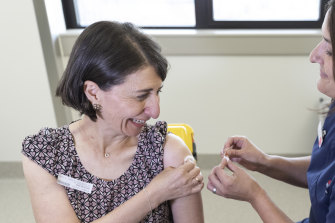 Dr Kleinig said there was no plausible biological reason why the vaccine would cause clotting problems.

“I personally cannot see how there might be a causal link,” he said.

“There is no doubt there is an association. But association does not mean causation.”

Several European countries have paused their AstraZeneca rollouts in recent days after a handful of cases of blood clots emerged following vaccination.

One, cerebral venous sinus thrombosis, occurs when a blood clot develops in the blood vessels that drain the brain. The other, disseminated intravascular coagulation, involves blood clots forming throughout the body.

In a city of 1 million people, scientists would expect about 15 cases a year.

Europe has recorded 18 cases in the first roughly 20 million people vaccinated, when normally they would expect to see a little more than one case in that time.

But a cluster of rare events all at once did not mean they were being caused by the vaccine, said Professor Kleinig, who is part of a global collaboration currently studying CVST events linked to the vaccine.

“Random events, by their very nature, cluster together. They are not distributed at even intervals in the population.”

To understand how 18 cases could happen randomly all at once, Professor Kleinig pointed to Apple’s ‘shuffle’ feature, which the company introduced on early iPods.

The feature is meant to play songs at random. But it angered users because it would often play multiple songs by the same artist – leading to accusations it was not truly random.

When a song by, say, Rihanna plays, the chances of the next song being also from Rihanna are the same as it being any other song in the playlist. Multiple Rihanna songs playing after each other are as possible as any other combination of songs.

A one-in-a-million disease could, by pure chance, crop up multiple times in quick succession.

“There are thousands of rare diseases, and some of those rare diseases are inevitably going to be associated with vaccination, just as a statistical phonenemon,” said Professor Kleinig.

If CVST is an ultra-rare side-effect of the vaccine – in the order of one in a million – no clinical trial could pick it up, as even the largest run to only tens of thousands of people, according to Professor Vlado Perkovic, a clinical trial expert and dean of medicine at the University of NSW.

“Clinical trials of the sort we rely on are not well placed to identify ultra-rare events,” he said.

With the vaccine now in the real world, it is very hard to do the sort of trial needed to determine if there really is an increased risk, and the analyses of national data have no control group to compare to, making the data difficult to interpret.

Science and health explained and analysed with a rigorous focus on the evidence. Examine is a weekly newsletter by science reporter Liam Mannix. Sign up to receive it every Tuesday.

“At best, you can say there may be a relationship,” said Professor Perkovic. “But the other side of the coin that’s being ignored is the alternative. What is the risk of not being vaccinated? And we have a pretty clear idea of what that is.”

A 65-year-old has a 1.4 per cent chance of dying if infected with COVID-19, a risk that increases with age.

“Having protection from COVID-19 is important. The benefits of doing that that far outweigh any possible risk,” said University of Sydney vaccine risk expert Professor Julie-Anne Leask.

Anya Taylor-Joy boyfriend: Who is The Queen’s Gambit star dating?