Hundreds of police officers from across Victoria will spend Christmas on the NSW border after the Australian Defence Force turned down a request to help prevent Sydney’s coronavirus outbreak spreading south.

The officers are being recalled or redeployed to the border as the Andrews government imposes tougher restrictions on people entering Victoria from NSW. 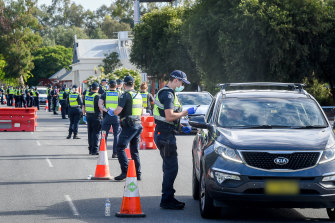 Despite requests for help from the Victorian government, the ADF confirmed it would provide no additional frontline support for police at the border. Instead it will offer up personnel for logistics and accommodation for those police being sent to the border.

The border redeployment came as NSW recorded 15 newly acquired cases in the 24 hours to 8pm on Sunday, bringing the total infections linked with the Avalon cluster to 83.

Victoria recorded one new case of coronavirus in hotel quarantine as the state notched up its 52nd day of zero community transmission since the end of the second wave.

Police Association secretary Wayne Gatt said hundreds of officers from across the state will be leaving their families behind to spend Christmas at border checkpoints. 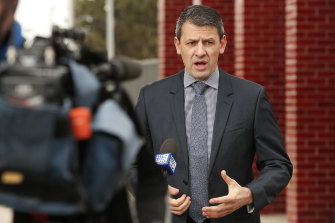 Victorian Police Association secretary Wayne Gatt said hundreds of police would spend Christmas on the border of NSW away from their families. Credit:Paul Rovere

“We are proud to support these members as they serve the Victorian community. They know how difficult this year has been for Victorians and how important it is to defend the freedoms the community has sacrificed so much to gain,” Mr Gatt said.

“We would also like to acknowledge the families of our members, who share the sacrifice their loved ones are making.”

On Monday morning a Defence spokeswoman said the ADF was prioritising its resources towards support for mandatory quarantine and preparations for the “high-risk weather season”.

She said the ADF had received three formal requests for support from the Victorian government.

“Defence will not provide direct support to vehicle checkpoints on the NSW/Victoria border,” she said. “Defence will continue to work with Victorian authorities to determine how best it can continue to assist in its COVID-19 response.”

There are currently 235 defence personnel in Victoria, compared with 379 in NSW and 348 allocated to Queensland.

Mr Gatt told radio station 3AW that among the officers being sent to the border at short notice was one who was now having to reschedule his wedding for the third time during the pandemic.

Mr Gatt said while some of the 500 officers at the border from Monday had volunteered, others had been directed to go. Many, he said, with less than a day's notice.

“That will have an impact on morale. It’s the single most difficult time of the year to have an operation fall at our feet,” he said.

“They deserve a medal in my view, they are really putting themselves out there.

"We should be very very grateful for the work that they’re doing.”

Mr Gatt said any support the federal government could provide would be “greatly appreciated” with the operation set to deeply affect many members who were now facing Christmas away from their loved ones.

“These are real life cases .. they tend to put the community ahead of themselves,” Mr Gatt said.

A Victoria Police spokeswoman said officers had been conducting roving patrols on major arterial and back roads on the border since midnight on December 18.

Thirteen vehicle checkpoints will be established that will operate 24 hours a day.

“There will continue to be a significant number of roving patrols occurring on back roads to ensure that no one from NSW is entering Victoria in breach of the current Chief Health Officer directions,” the spokeswoman said.

Survivors of female genital mutilation in Kenya tell their experience