Hurricane Lorenzo is the fifth hurricane of this hurricane season having first begun as a tropical wave last week. At the start of this week, the tropical depression strengthened into a tropical storm and then into a hurricane. After the storm completed an eyewall replacement cycle it appeared the storm was weakening, but Hurricane Lorenzo rapidly intensified becoming a Category 3 storm yesterday and hitting Category 4 strength today.

At this point, Lorenzo had become one of the largest and most powerful hurricanes on record for the central tropical Atlantic, with the only comparable hurricane being Hurricane Gabrielle of 1989.

The National Hurricane Center (NHC) said as of 11am AST (4pm BST), the storm was located near latitude 15.4 north, longitude 40.2 west, which is approximately 1055 miles west of the southernmost Cabo Verde Islands.

The advisory reads: “Lorenzo is moving toward the west-northwest near 13mph (20kmh).

“Lorenzo is forecast to turn toward the northwest later today, and this motion should continue through Friday. 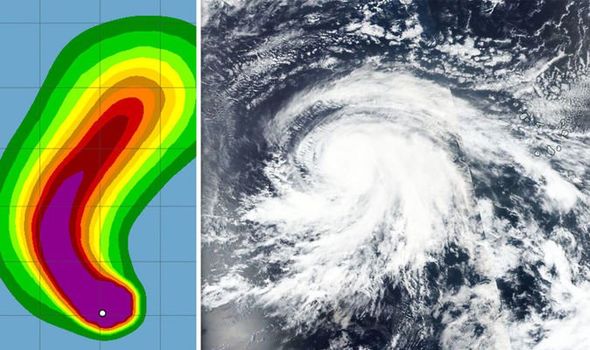 “A turn toward the north is expected Friday night and Saturday.

“Maximum sustained winds are near 130mph (215kmh) with higher gusts.

“Lorenzo is a Category 4 hurricane on the Saffir-Simpson Hurricane Wind Scale.

“Additional strengthening is possible today, and fluctuations in intensity are expected tonight through Friday night. 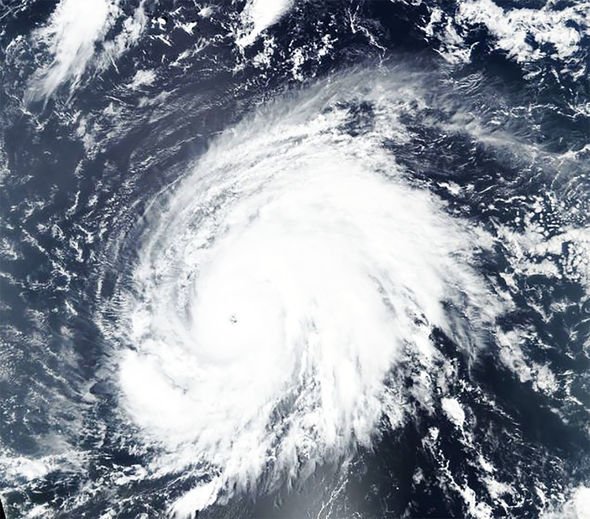 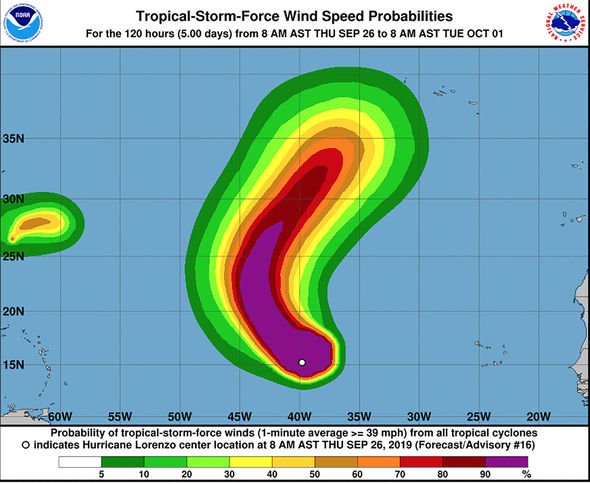 According to the Saffir-Simpson Hurricane Wind Scale, a Category 4 storm has sustained winds of 130 to 156mph where “catastrophic damage” can occur.

This catastrophic damage is defined as well-built framed homes potentially sustaining severe damage with loss of most of the roof structure and/or some exterior walls, trees being snapped or uprooted and power poles downed.

The next advisory for Hurricane Lorenzo will be issued at 5pm AST (10pm BST). 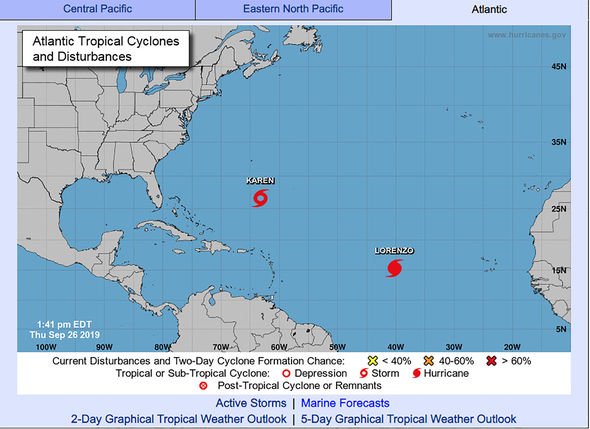 NHC scientist Eric Blake tweeted: “Very happy that #Lorenzo is turning out to sea- that is a beastly hurricane.

“You won’t find anything comparable in that part of the basin for strength and size except for Gabrielle 1989, and that was several degrees west.”

Tropical storm Karen has grown slightly stronger but is forecast to become a remnant low in a few days.

As of 11am AST (4pm BST), the storm was located near latitude 26.6 north, longitude 63.3 west which is roughly 405 miles south southeast of Bermuda. 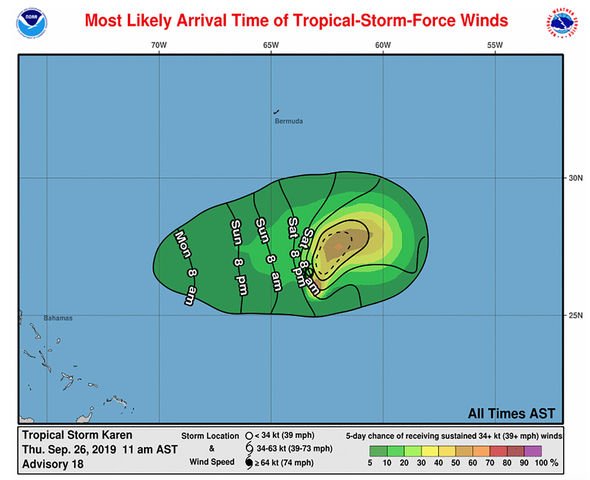 The storm had maximum sustained winds of 45mph and was moving north northeast at 14mph.

Weakening has been forecast for Karen by the weekend with the storm expected to become a remnant low by Sunday.

Tropical-storm-force winds extend outward up to 60 miles (95km) northwest of the centre.

The next advisory for Karen will be issued at 5pm AST (10pm BST).