Hayley Hadassin’s phone rang at 8:45 pm. It was the principal at her nine-year-old son’s international school in Hong Kong informing her that the entire class would be sent to government quarantine camps after a teacher tested positive for COVID-19.

Hong Kong’s Centre for Health Protection called as soon as she put the phone down: pick up would be in the next 24 hours.

“We didn’t sleep that night,” said the Australian mother of three, who is based on the island with her family. 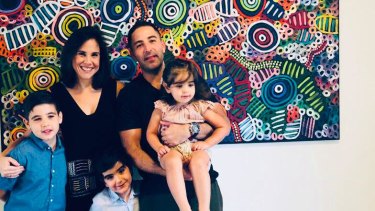 Australian expat Hayley Hadassin with her family in Hong Kong.

“I don’t think I have ever sworn so much,” she said. “Never get your nine-year-old to pack. All he took were soccer balls.”

The Hadassin family’s experience is one of the dozens that played out across Hong Kong over the weekend after health authorities ordered an “ambush lockdown” to tackle a growing outbreak, ordering anyone that had tested positive for COVID-19 to go to the hospital, including infants.

At the same time, all close contacts, even those who test negative, have been sent to makeshift quarantine camps in the city as it attempts to stamp out another wave of the virus. This outbreak started at a gym popular with expats and has now grown to more than 120 cases, spreading through the international community in the global financial hub.

Hadassin was told by other parents that there was no WiFi in the quarantine facilities, the food was inedible, the rooms tiny, no fridge and there was no outdoor area. “Friends called with offers of hot plates and rice cookers, suggestions to take a microwave and kettle,” she said.

“The consulate’s response shamed me as an Aussie,” she said. “I was told they cannot help, as they cannot interfere in the rules and regulations of Hong Kong, but to send an email so they can track the case.”

The Department of Foreign Affairs said it was providing consular assistance to a number of Australians in Hong Kong who have contacted the consulate, having either tested positive or who have been quarantined. 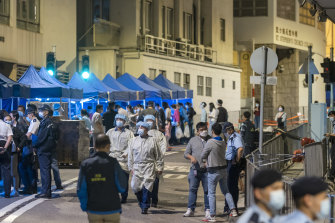 “The Consulate-General is in regular close contact with Hong Kong government health officials on this matter,” a spokesperson said. “Due to privacy considerations, we are unable to provide any information on individual circumstances.”

Chief Executive Carrie Lam on Tuesday defended the measures, stating that public health concerns had to be respected. “[We have] no policy to deliberately separate children from their parents.”

“Where the close contacts are young children of the parents, we will exceptionally allow the admission of the children into hospital as well, where there will be appropriate arrangements,” she said.

Hadassin said it was left up to parents and the school to argue their case against the forced quarantine in a government facility. The children were exposed for ten minutes to the teacher, who was behind plexiglass, and they were all wearing masks – well below the close contact exposure time of 20 minutes mandated under Hong Kong’s Centre for Health Protection guidelines.

After a tense 24 hours of lobbying, Hadassin was told Hong Kong authorities had suddenly reversed their decision, allowing the class to undergo mandatory testing but not quarantine.

But another class of 35 nine-year-olds from the international Harbour School were not spared and had to be quarantined. Another group of eight babies and parents who attended a playgroup were also sent into isolation.

The Asian financial centre is home to one of the biggest groups of foreigners in the region.

Tara Joseph, the head of the American Chamber of Commerce, said the international business community was grateful that the Hong Kong government had largely contained COVID-19 to 11,000 cases.

But she said the “sudden and mandatory quarantining of entire school classes, including toddler groups, really has alarmed many people”.

“We don’t want to be a whinging expat community,” she said in a phone interview. “But whether it’s Hong Kong children or expat children. It worries us greatly.”

“Let’s face it, we’ve gone through violent protests, the National Security Law, now changes in local politics, all under COVID.

“It’s been a particularly challenging time for Hong Kong and most of us want to stay here and do business but the lack of communication is a major hurdle”.

A snap survey of AmCham members in Hong Kong released on Wednesday found almost 60 per cent were worried about entire school classes being sent into quarantine, 53 per cent believed it to be unjustified and 54 per cent said it would weigh on their decision about staying in Hong Kong.

Victoria Monét Welcomes Her First Child: "Mommy and Daddy Love You So Much!!!"