Last blast of Storm Barra! Ice and flood warnings as tail of 1,000-mile wide tempest lashes Britain with 80mph gales and heavy rain – as 3,200 homes are left without power in wake of ‘weather bomb’

Fresh ice and flood warnings have been issued for parts of the UK today as the last blast of Storm Barra is set to lash Britain with 80mph gales and heavy rain.

The Met Office notices come after the tempest battered many areas yesterday, with about 3,200 homes in north-east Scotland, Northern Ireland and Wales left without power in the wake of the ‘weather bomb’.

That was in the wake of thousands more households in Scotland and north-east England losing power for up to 10 days after suffering 100mph winds and lashing rain at the end of November.

Northern Powergrid has not confirmed whether all homes were connected by Tuesday night as promised.

Storm Barra moved in from the west on Tuesday, and a yellow weather warning for wind is in place until 6pm today for the west coast of Wales and south-west England.

The Met Office warns that delays to road, rail, air and ferry transport are likely and a further short term loss of power and other services is possible.

Aberdaron in Gwynedd, Wales, which is covered by the warning, was battered by gales of 86mph on Tuesday, while Orlock Head in Co Down, N Ireland, faced 76mph gusts.

Met Office forecasters said Storm Barra is not expected to cause as much chaos as Storm Arwen – though it has already sparked travel delays and school closures in Scotland. 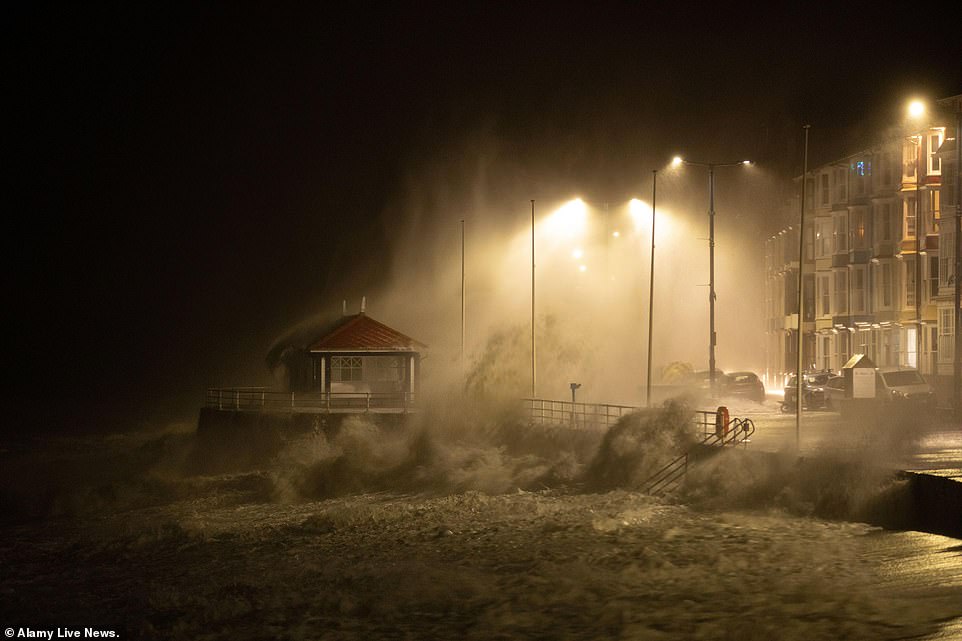 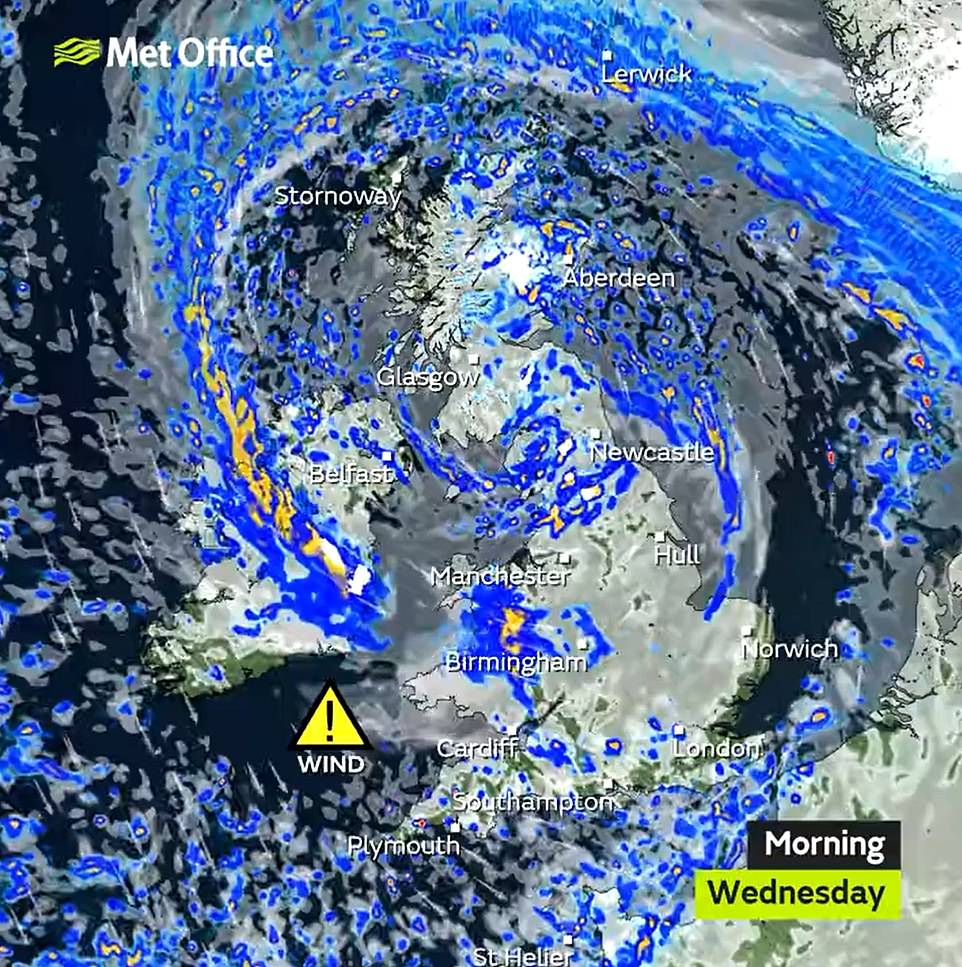 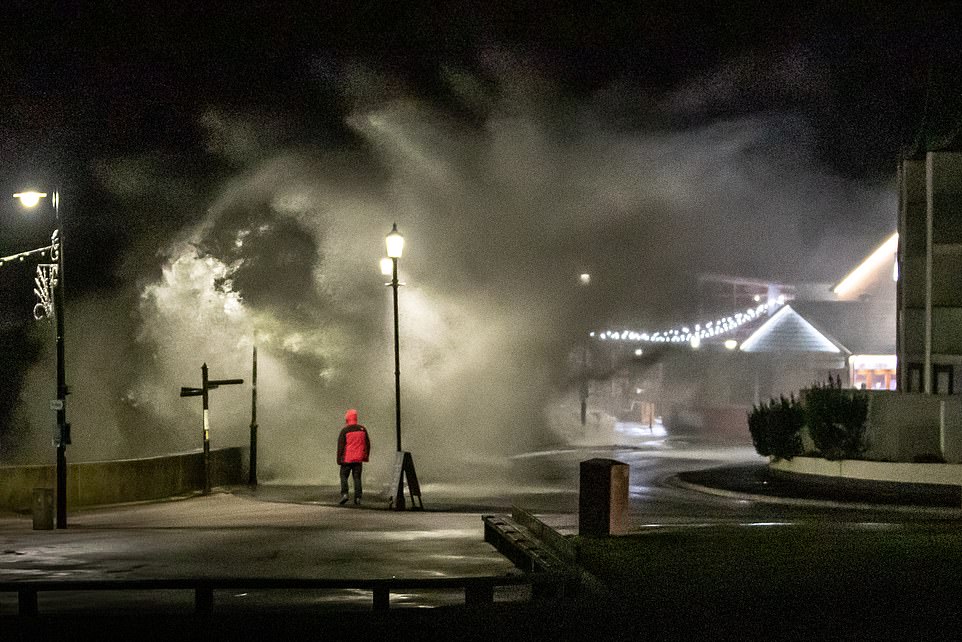 A person tries to clear the road as Storm Barra combined with high tide last night in Aberystwyth, creating huge waves along the promenade

Barra Best revealed he had received a call from Met Eireann, the Irish meteorological service, earlier this year asking for the origins of his name. Soon enough, his name was being plastered across headlines amid warnings of the damage the storm could cause. 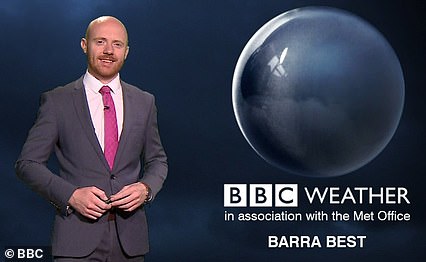 He told the BBC’s Evening Extra programme: ‘What happened was the head of Irish weather service Met Eireann called me in August and asked me where my name was from.

‘I thought it was a bit strange, I didn’t know why she was asking – it comes from the south-west of Ireland from Finbarr, St Finbarr in Co Cork and it’s derived from that.’

He continued: ‘She said oh that’s fine, that’s fine. I asked why did you want to know and she said oh you’ll find out in about a month. Of course the email came out and the list of names were announced and she had decided to put my name in there.’

Spokeswoman Nicky Maxey said: ‘We are not expecting the impacts of Barra to be as bad as we saw with Arwen.

‘Storm Barra will bring strong winds and heavy rainfall to many parts of the UK today. We may see some snow on the higher ground, too.

‘It is unlikely to be as impactful as Storm Arwen last week but there will be blustery conditions so people should still be prepared.’

ScotRail has warned that some services will be cancelled today due to the storm. Temperatures will be mild for the time of year today, with London predicted to see 7C, 8C in Cardiff, 4C for Edinburgh and 6C in Belfast.

The Environment Agency has issued 11 flood warnings for England at locations including Hartlepool and Sunderland in the North East, Bournemouth and Weymouth in the South, and part of the Cumbrian coast.

Some 66 flood alerts, for areas where flooding is possible, have also been issued across the country.

The Scottish Environment Protection Agency (SEPA) has sent 11 flood alerts and five warnings for areas in the north-east of Scotland and the south-west.

Yesterday, most of England, Wales and Northern Ireland was on alert and covered by Met Office wind warnings amid fears over travel disruption, while a band of snow on the storm’s leading edge was set to bring blizzards in the far north.

By this afternoon there were 56,000 homes and businesses without power across the Republic of Ireland and schools closed across 12 counties, with one official in the country saying Barra was only ‘halfway through’ and the strongest winds could be yet to come. There were also 4,000 properties without power across Northern Ireland.

Forecasters said Barra was officially a ‘weather bomb’, another name for an ‘explosive cyclogenesis’, which is when there is a rapid fall in pressure of 24 millibars in 24 hours in the central section of an area of low pressure.

Barra fell from a pressure of 1017mb at 6am yesterday to 961mb at 6am today, meaning there was a 56mb drop in 24 hours which therefore developed over double the criteria required for it to become a weather bomb.

Met Office meteorologists added that forecast maps were showing small breaks in the ‘line convection’ – a narrow band of very intense rain and gales – which can be signs of some rotation of weak funnel clouds or tornadoes. 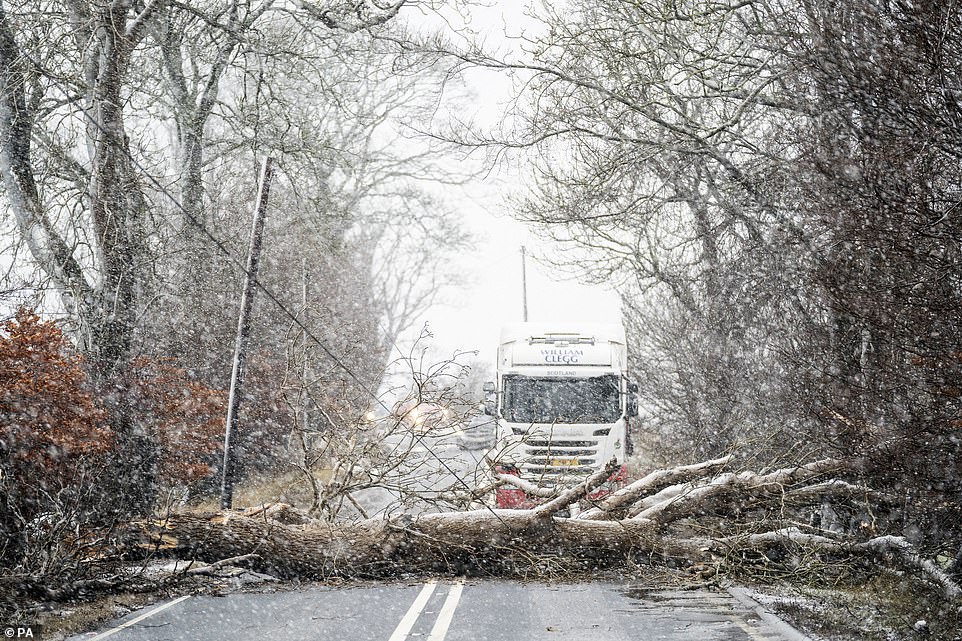 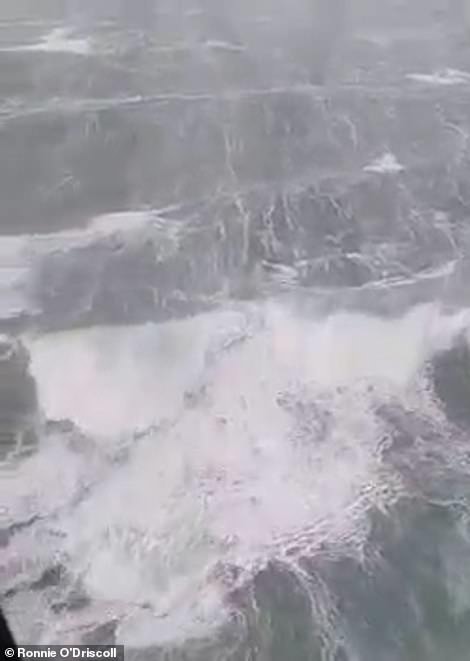 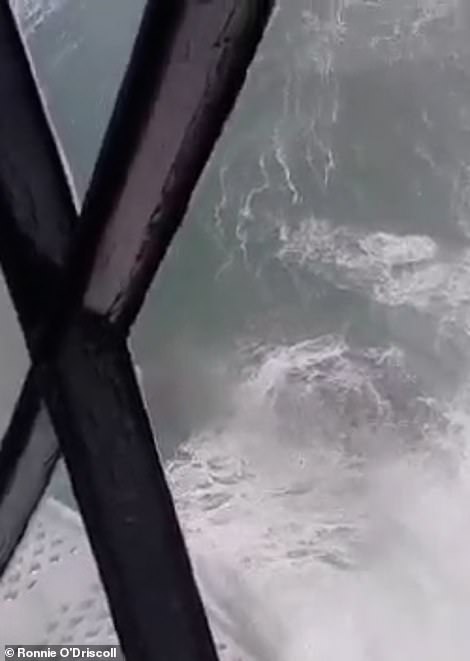 An extraordinary video filmed from inside the lantern of Fastnet Lighthouse today showed huge waves crashing against the structure, located on the remote Fastnet Rock in the Atlantic eight miles off County Cork, during the storm 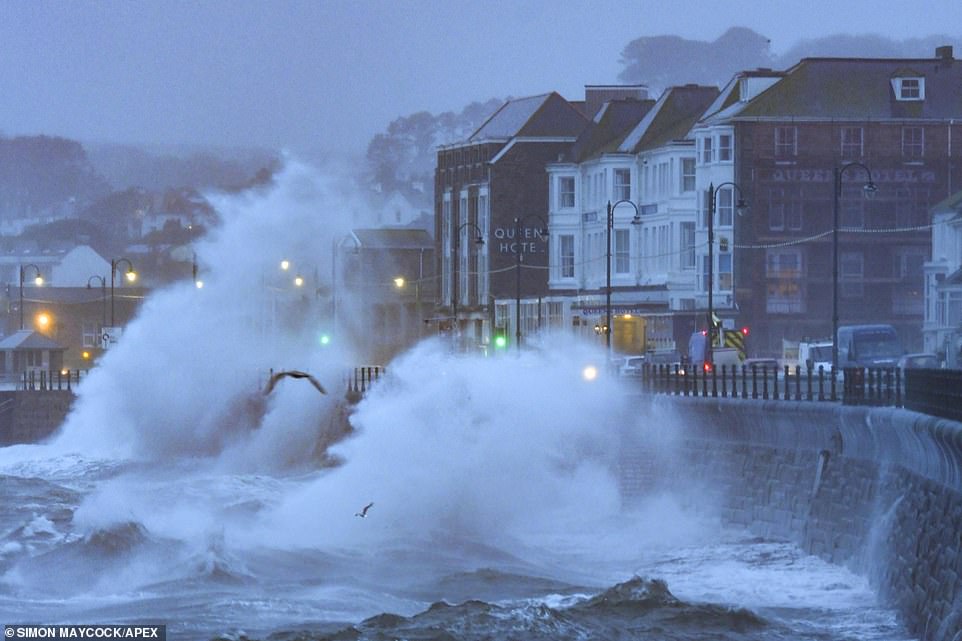 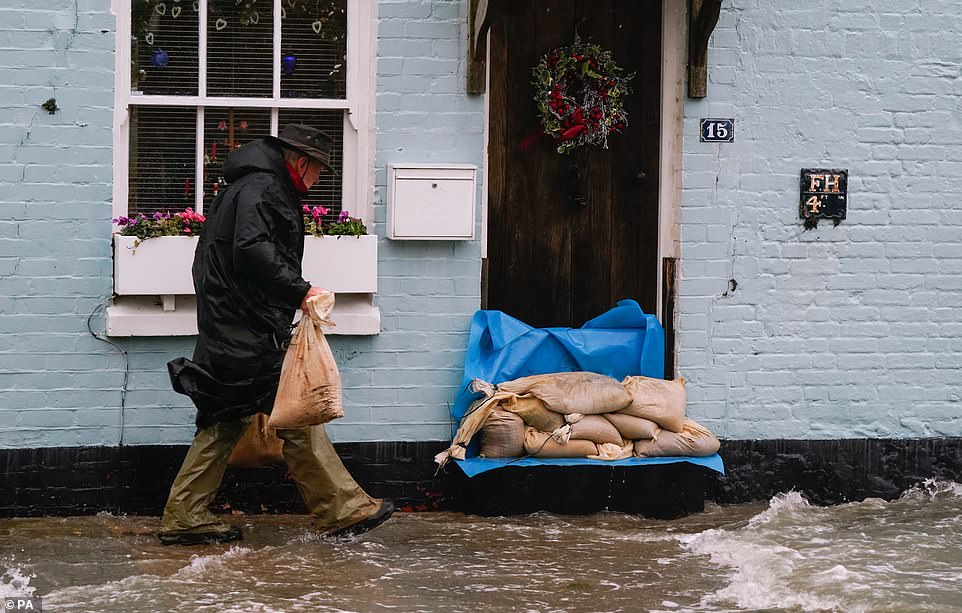 A person places sand bags outside a property in Langstone, Hampshire, yesterday as Storm Barra hits the UK and Ireland 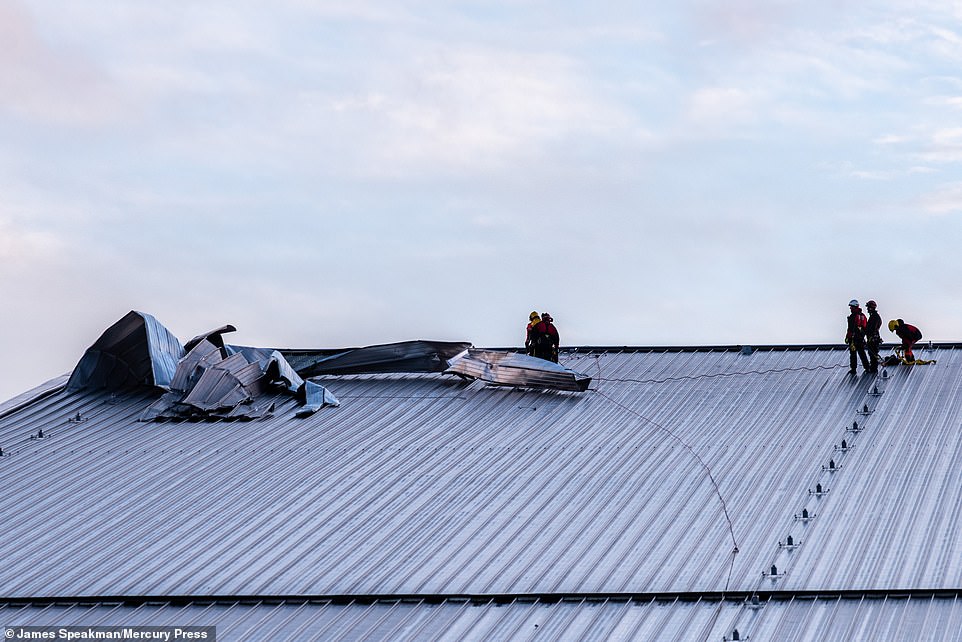 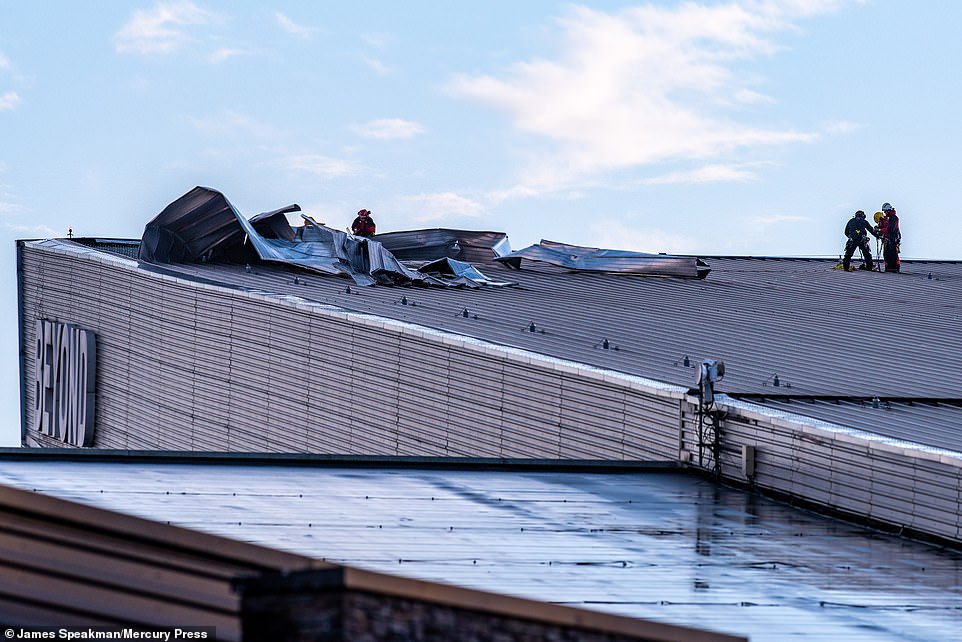 High winds caused by Storm Barra ripped a large section of the top of the roof away from the structure, leaving sheets of corrugated metal unsecured around 165 feet high

What is a weather bomb?

A ‘weather bomb’ – also known as an ‘explosive cyclogenesis’ by meteorologists – happens when there is a rapid fall in pressure in the central section of an area of low pressure.

The level has to fall by 24 millibars in 24 hours in our latitudes to be classed as a ‘bomb’.

The events happen when dry air from the stratosphere flows into an area of low pressure.

This causes air within the depression to rise very fast and increases its rotation, which deepens the pressure and creates a more vigorous storm.

There are estimated to be between 45 and 65 explosive cyclogenesis events a year and that more ‘bombs’ tend to occur in the northern hemisphere.

On Monday, Prime Minister Boris Johnson said more than 1,000 homes were still without power but that he was assured by Northern Powergrid boss Phil Jones that ‘affected properties would be reconnected tomorrow (Tuesday) at the latest’.

Mr Johnson said ‘too many people have spent too long without power’ and the situation in northern England was not acceptable.

Schools in Dumfries and Galloway were forced to close because of the weather. Stranraer Academy was shut after the wind caused structural damage to the roof, the council said, and Drummore School closed after trees were blown down.

Photographs yesterday showed huge waves smashing into the South West coast in Devon and Cornwall as the 1,000-mile wide tempest roared into the UK, while flooding hit parts of Ireland and there was snow in northern England.

Gusts of 67mph were recorded this morning on the Isles of Scilly, off the far South West coast of England, as Barra moves its way in from the West. There were also 83mph gusts on Sherkin Island, off County Cork in Ireland.

An extraordinary video filmed from inside the lantern of Fastnet Lighthouse showed huge waves crashing against the structure, located on the remote Fastnet Rock in the Atlantic eight miles off County Cork, during the storm.

The BBC’s Ireland correspondent Chris Page urged people to ‘stay indoors if you can’ in Northern Ireland which is expected to bear the brunt of the storm, although almost all of Britain is under a wind warning. This expires for most of the UK at midnight tonight, but there is also a warning for the South West running until 6pm tomorrow.

Rihanna's Lingerie Line Will Include 90 Styles, All Under $100