Albanian illegal immigrant, 25, who led police on 100mph chase before crashing into a family’s home and sending bricks and debris flying into their young son’s bedroom is jailed for a year 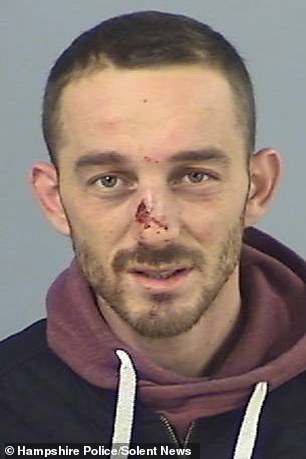 Eljado Prendaj, 25, struck the family’s cars so hard that one was forced into the property, sending bricks and debris flying into their young son’s room. Undated mug shot

An illegal immigrant who led police on a 100mph chase before crashing into a family home has been jailed for a year.

Eljado Prendaj, 25, struck the family’s cars so hard that one was forced into the property, sending bricks and debris flying into their young son’s room.

Both cars were written off and the home – which suffered £40,000 worth of damage – was deemed unsafe.

Southampton Crown Court heard that Prendaj, who is from Albania and was living in the UK illegally, ‘drove like a man possessed’ after police attempted to pull him over for ‘swerving across carriageways’ on the M27 near Eastleigh in Hampshire.

The court heard Prendaj, who was driving a blue Ford Focus, stopped for police, but as the officers exited their vehicle to question him he quickly sped off.

Police described seeing sparks coming from the car as they chased Prendaj at speeds in excess of 100mph.

They added Prendaj then took a slip road towards Eastleigh where they lost sight of him around a corner.

When they turned the corner they could see Prendaj’s car had flipped onto its side after striking two other vehicles. 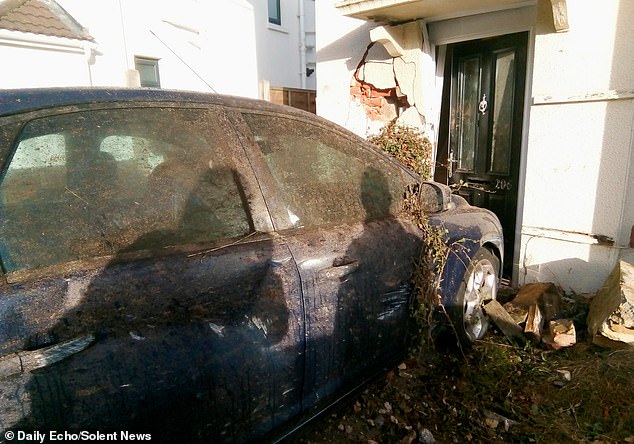 Prendaj struck the family’s cars (pictured) so hard that one was forced into the property, sending bricks and debris flying into their young son’s room. These images were taken at the house in Eastleigh, Hampshire, shortly after the collision in November

Craig Collins and his family had been sleeping when Prendaj crashed into their home at 3am on November 8, causing lumps of brick and debris to be propelled into the house just inches away from where one of Mr Collins’ sons was sleeping.

Describing the incident as ‘one of the worst cases of dangerous driving’, Judge Gary Burrell QC sentenced Prendaj to 12 months jail and told him he faced deportation.

A special immigration hearing will be needed before this is decided.

Judge Burrell told Prendaj he was ‘crazy’ to drive at such high speeds. ‘You could have killed someone, you were driving like a man possessed,’ he said.

‘As it was you caused a lot of damage and badly frightened the Collins family and their children. It’s one of the worst cases of dangerous driving.’ 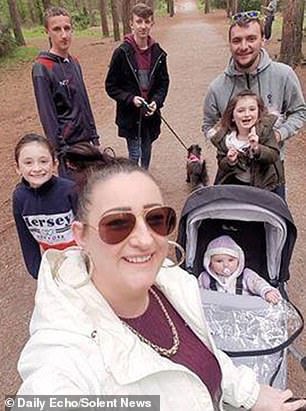 Craig Collins (top right) and his family, whose home was damaged, are seen in an undated photo

Prosecutor Roderick Blaine told the court: ‘The officers saw sparks from the car which meant part of it was obviously touching the ground.

‘Officers did not see what happened. They turned the corner and did not see the car as expected. But they did see the car on its side and the two cars parked outside the house had been struck.

‘One of the two cars shunted into the front of the house, the other into a neighbour’s fence.’

In a statement, Mr Collins said both of the cars had been written off as a result of the crash and his family forced to live in a hotel.

He added: ‘The fire officers said the home was unsafe to live. It was examined by the housing association and it was deemed unsafe.

‘We are grateful for the hotel but it’s unsatisfactory for our family to be in one room of a hotel, all the children sharing one room.

‘It’s unfair on the children because they can’t see their friends and are cooped up in the room. We are grateful to all the support from the housing association, friends and family.’ 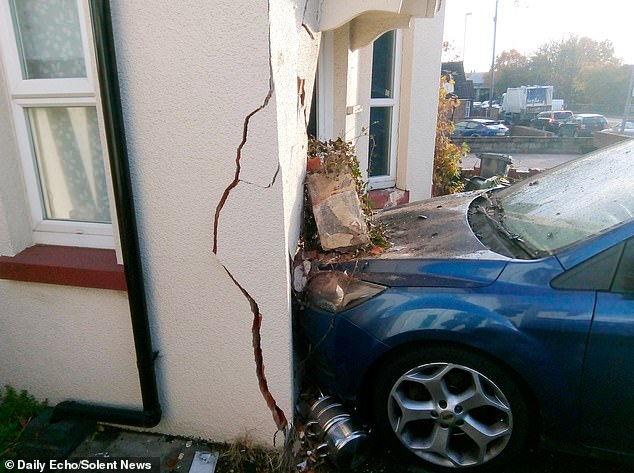 The family car that was propelled into the house by Prendaj’s Ford Mondeo, which reached speeds above 100mph 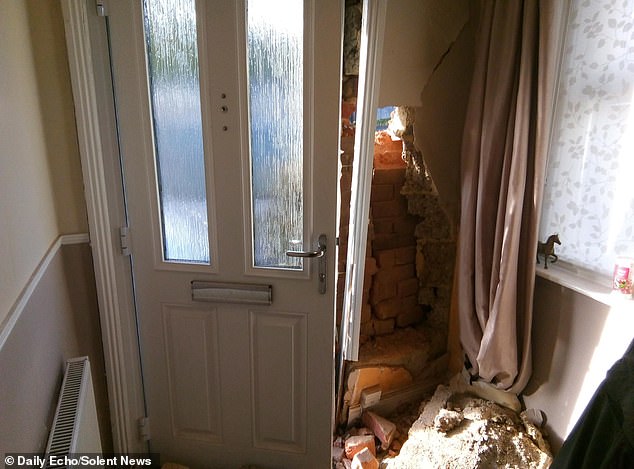 The home is expected to cost £40,000 to repair. Pictured is a hole in the house where debris poured in

Since the incident, the family have found accommodation and with the help of the community have managed to furnish it.

Mr Blaine added it was estimated that the cost to fix the home would be around £40,000.

Eve Shelley, mitigating, said Prendaj ‘had a moment of complete panic’ when he decided to speed off from the police.

She said Prendaj had been concerned that officers may have found out he was living in the country illegally.

‘He is remorseful and offers his sincere apologies to the family,’ she added.

Prendaj, of no fixed address, admitted dangerous driving, driving without a licence and without insurance.

In adding to his prison sentence, Prendaj was banned from the roads for three years and ordered to take an extended retest when that time period elapses. 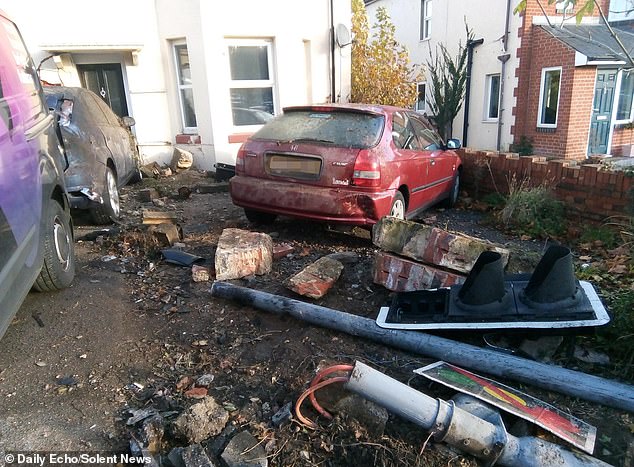