Brussels Eurocrat Guy Verhofstadt insisted he was not responsible for foreign interference in the European elections as she campaigned for the Liberal Democrats today.

He said he was ‘a Lib Dem and and backing the party because it opposed Brexit, predicting a Remain surge in the May 23 elections.

‘Support the Lib Dems in this difficult fight in Britain, in these European elections.

‘Secondly, we want to show by coming here a message to the continent to say never repeat Brexit again.

‘I’m a Lib Dem. It’s natural that people are looking to the Lib Dems when it comes to European elections. 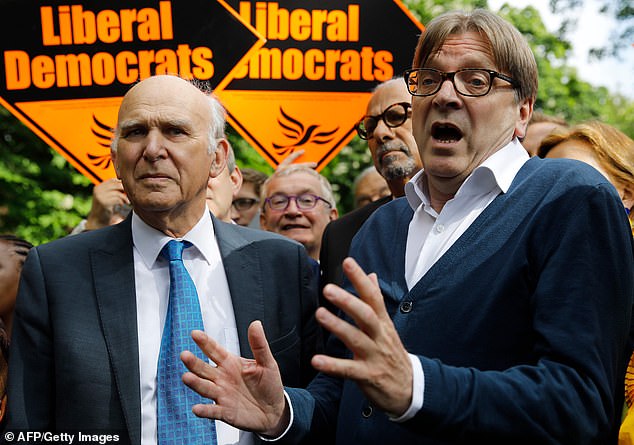 Mr Verhofstadt, the European Parliament’s Brexit co-ordinator and former Belgian prime minister, said: ‘What I think is there will be a huge support for Remain’ 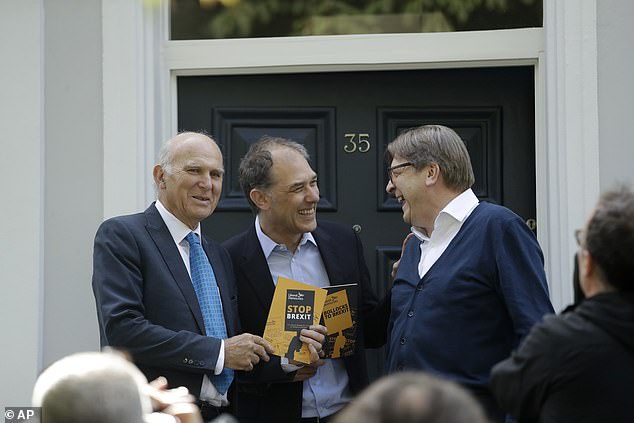 ‘We want to be the alternative for nationalism and popularism.

‘What I think is there will be a huge support for Remain.

‘I’m not here as a Brexit negotiator, I’m here as the leader of the liberals and democrats for Europe.’

Asked if his presence could be seen as foreign interference, Mr Verhofstadt said: ‘This is Europe. Europe, it’s all Europe.’

Sir Vince said his party was standing up ‘to the ugly populism that is now happening’ as it campaigned ahead of the May 23 Euro poll.

‘We are fighting nationalism, he said.

‘We are patriotic people in our different countries, but we are fighting nationalism.’

The Remainer party has chosen the blunt title of B*llocks to Brexit for its European manifesto, with an alternative of Stop Brexit for voters with more refined sensibilities.

At the manifesto launch in London’s Shoreditch last night, Sir Vince joked one prospective voter had fainted in shock, while a radio interviewer said he was risking his Ofcom licence for broadcasting indecencies.

Following last week’s local elections, the Lib Dems are looking to capitalise on their success by hammering home their anti-Brexit stance and commitment to tackling climate change.

Sir Vince, who turned 76 on Thursday, was greeted with a rousing round of Happy Birthday as he took to the podium.

He told supporters: ‘We’ve had our joke. This is the real story. We mustn’t lose sight of that very clear, simple, unambiguous, honest message – that’s what’s driving our campaign.’