Hindu nationalist BJP storms back to power with thumping majority winning more than 300 of the 542 seats. 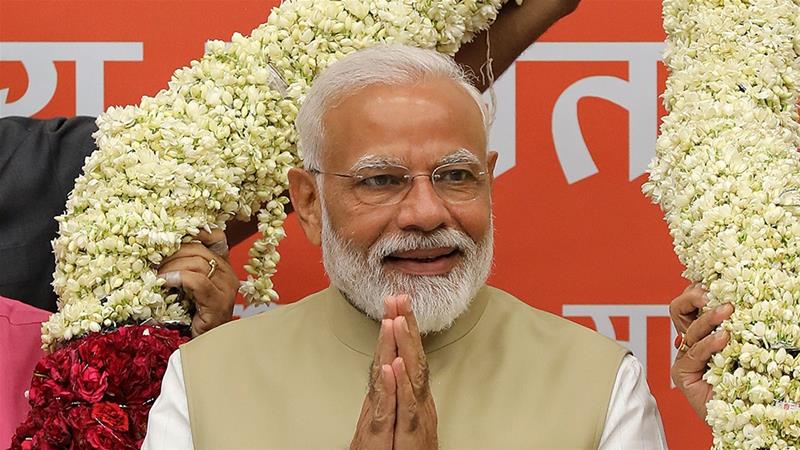 New Delhi, India – Prime Minister Narendra Modi’s Hindu nationalist Bharatiya Janata Party (BJP) is on course to a landslide victory in the Indian elections and is set to return to power.

The BJP, which ran a presidential-style campaign with Modi as its mascot and based its campaign on a hardline Hindu agenda, won 208 seats and was leading on 95 seats out of the 542 seats it contested.

The party has improved its performance compared with the 2014 elections when it won 282 seats.

“It is not Modi’s victory, but a win of people’s hope and aspirations,” Modi said, addressing supporters at party headquarters in New Delhi.

“Whatever happened in these elections is in the past, we have to look ahead. We have to take everyone forward, including our staunchest opponents.”

The return of the right-wing party on Thursday, with a bigger mandate, has caused concern among the country’s Muslim community, who suffered attacks by Hindu vigilante groups over the past five years.

Although widespread agrarian distress and record levels of unemployment had put pressure on the BJP before the vote, Modi successfully steered the campaign away from these issues, harnessing rising tensions with Pakistan to focus on national security and foreign policy and his party’s vote share increased by more than 10 percentage points. 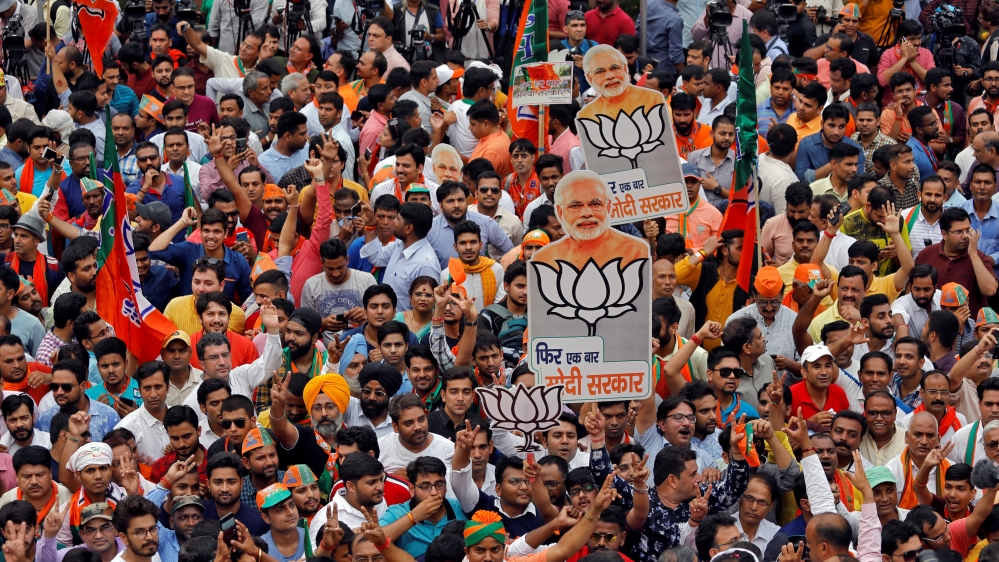 The pall of gloom was palpable in some of New Delhi’s Muslim neighbourhoods such as Jamia Nagar and Batla House.

By the time Al Jazeera reached the area, at around noon, the general trend of the results was clear, people could be seen huddled in groups discussing the results with trepidation.

A poignant scene played out at an apparel shop in Jamia Nagar, owned by 74-year-old Rahmat Hussain. In the shop a crowd was gathered to watch the results on Hussain’s TV.

When it became clear that the opposition was nowhere close to challenging the BJP, he switched off the TV and said, “it’s all over”.

Mohammad Ansari, who owns a meat shop in Batla House, said: “This result shows that our Hindu brothers cutting across caste lines, even the Dalits, have voted for the ‘Hindu Rashtra’ [nation] project of the BJP. If this is not a clear message of hate against Muslims, what is?”

In the lead-up to the results, the opposition’s hopes were pinned on a good showing in states such as Bengal in the east and the Hindi-speaking heartland states of Uttar Pradesh, Madhya Pradesh and Rajasthan.

But these were the states where the BJP performed exceedingly well and dashed the opposition’s plans. 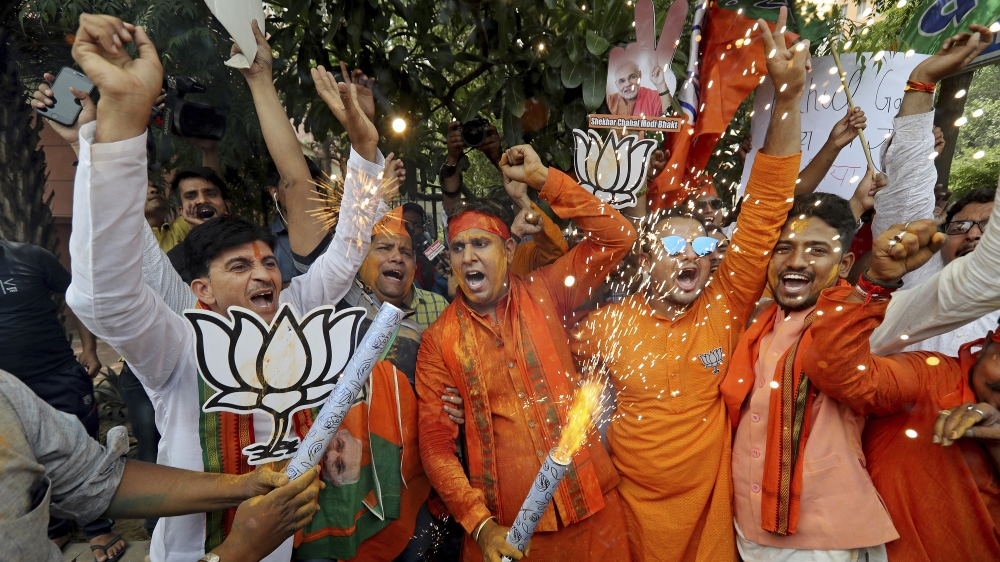 The biggest upset was arguably in West Bengal where the right-wing party has never had a significant presence in the past and was fighting against the All India Trinamool Congress (TMC) party, which runs the state government.

Weathering a spirited fight led by Chief Minister Mamata Banerjee, the BJP won 18 seats, which is significantly more than the two seats it won in 2014.

In Uttar Pradesh where arch-rivals Bahujan Samaj Party (BSP) and Samajwadi Party (SP) came together to counter the Modi wave, the BJP still managed to win 63 of 80 parliamentary seats.

Ajai Kumar of the Indian Institute of Advanced Studies who travelled extensively in Uttar Pradesh during the election period said that the SP-BSP coalition’s social engineering project to bring the most marginalised Dalits, Muslims and backward classes together, had failed.

“But it managed to merely bring the leaders of these social groups together. The voting public remained divided as ever despite their shared experience of social exclusion,” he told Al Jazeera.

The biggest loser in these elections, however, is the principal opposition party, the Congress, which won 13 seats and was leading on 39 other constituencies.

Its President Rahul Gandhi, who lost his own seat from the Gandhi pocket borough of Amethi in Uttar Pradesh state, conceded defeat and congratulated Modi on the victory.

“I congratulate Narendra Modi and BJP for their victory in this election.”

” … the people of India have decided that Narendra Modi is going to be our PM and I totally respect that,” he said at a press conference in New Delhi.

The party took solace from the fact that it marginally improved on its seat share in 2014 when it was reduced to just 44.

What made the defeat of the Congress more striking was that it faced a virtual washout in Madhya Pradesh, Rajasthan and Chhattisgarh despite heading the state governments.

BJP has been leading in 61 out of the 65 seats in the three states.

In a repeat performance of the 2014 elections, the BJP swept the elections in the Hindi belt, from Rajasthan in the west to Bihar in the east.

“These results show that the geographic core of the BJP in the north and west of the country are intact despite a good showing by the Congress in the state elections [in December],” Nilanjan Sirdar, a political economist, told Al Jazeera. 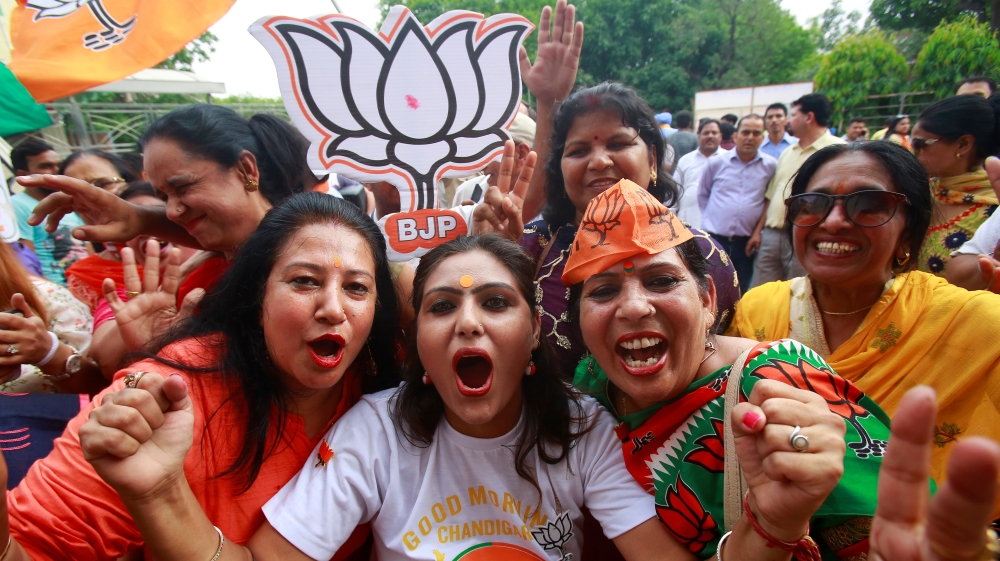 He noted that 70 percent of the BJP’s seats in 2014 had come from the north and west, adding that, “support for the BJP has only gone up in the last five years of Modi rule”.

“There is no denying that this is the result of a formidable Modi wave,” Sirdar said.

Karan Bishnoi, a Congress worker from Rajasthan, who was working as a volunteer with the Congress’s social media campaign team in the state, was at the party’s New Delhi headquarters on Thursday in the hope of celebrating a Congress victory.

When the results disappointed, he accused the Congress of being top heavy and accused its leadership of being disconnected from the workers.

“The top leadership makes strategies while sitting in the air-conditioned rooms without taking feedback from the workers at [the] ground. The party needs to change its strategy and listen to its workers who are the heartbeat of the party,” he told Al Jazeera.

The Official Royal Wedding Photos Are Here, and Of Course Meghan Markle Is A Vision