Fancy a THREE-DAY-week? Indian tech firm says shorter hours ‘is the future of employment’ as it looks to fill positions

An Indian tech firm is offering its new hires the prospect of a three-day week with a salary at 80% of a full week and claims that shorter hours are the ‘future of employment’.

Fintech company Slice began making the startling proposition to prospective employees in an attempt to entice in-demand technology graduates, believing that fewer hours and greater flexibility and pay is more valuable than other perks such as extra holiday allocations.

Slice Founder Rajan Bajaj, 28, is adamant that his company’s philosophy is geared towards a more flexible future.

‘This is the future of work. People don’t want to be tied down to a job,’ Bajaj told Bloomberg.

Slice is one of many rising Indian tech companies that have profited from foreign venture capitalist firms flooding the arena with investment. 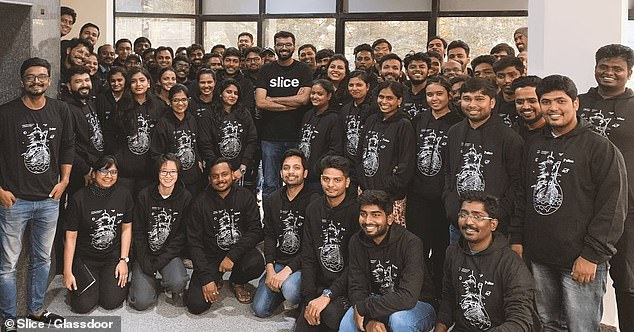 Headquartered in Bangalore, the company secured $20 million in its latest financing round earlier this year which has enabled it to grow to a considerable size of 450 employees

As a result of the rapid growth in India’s tech industry, companies are now locked in fierce competition to secure the country’s top talent, with a wealth of jobs on offer to tech graduates and professionals.

Earlier this year, Slice, headquartered in Bangalore, secured $20 million in its latest financing round which has enabled it to grow to a considerable size of 450 employees.

But Bajaj has claimed the company aims to recruit 1,000 engineers and product managers in the next three years, meaning it will need to make offers of employment more attractive to beat out competing firms.

‘[Slice’s offering] is the best of both worlds,’ Bajaj said. ‘Workers can get salary and full benefits working a three-day week, and spend the rest of their time chasing a startup dream, looking for a co-founder or pursuing a non-work passion.’

India has a fledging credit industry. While hundreds of millions of Indians have a bank account, there are only around 50 million credit cards in use according to Statista, while a Research and Markets report last year found that only 3 in 100 Indians have a credit card.

Slice aims to offer credit cards with extremely low credit limits and little to no sign-up or annual fees as a way to encourage millennials to take the plunge and build a credit score over time, a tactic which it hopes will spark widespread adoption over the coming years and ensure Slice becomes one of the major players in India’s credit card market.

Indians who sign up to receive a Slice credit card get access to an app which enables them to manage their expenses and repayment schedule in a similar to fashion to many of the services offered by credit providers and challenger banks in Britain.

The startup firm says it will offer considerable cashback and rewards incentives to outperform larger companies, and also offers a zero-fee card which charges no annual fees provided repayments are made on time.

The world’s largest-ever trial of a ‘four-day’ working week in Iceland has been deemed an ‘overwhelming success’ as researchers call for it to be tested in the UK.

Workers were less stressed and had a better work-life balance while bosses saw no significant drop-off in productivity or provision of services, analysts said

As a result of the experiment, which ran from 2015 to 2019, some 86 per cent of Icelandic workers have now negotiated contracts with permanently shortened hours.

Will Stronge, director of research at British think tank Autonomy, said: ‘This study shows that the world’s largest ever trial of a shorter working week in the public sector was by all measures an overwhelming success.

But, as the trial progressed, it expanded to include 2,500 workers in both public and private sectors – or 1 per cent of the country’s entire workforce.

Workers who took part in the trial said they were able to organise their private lives better – running errands in the afternoons or picking up a bigger share of housework.

The unbearable rightness of being young and silly

Our 31 Favorite Fall Sweaters of 2018 Are Cute and Cozy