Footage has emerged of an Indian policeman’s hand being lopped off in a terrifying sword attack as officers stood at a coronavirus road checkpoint.

Harjit Singh, an assistant sub inspector with the Punjab Police, was patrolling outside a vegetable market in Patiala when seven men belonging to the Nihang Sikh warrior sect turned violent.

Footage shows a truck ramming through the barricades before the warriors leap from their vehicle and attack with traditional Sikh blades.

Singh’s left hand is cut from his wrist and he can be seen writhing on the floor in agony, screaming as he tries to stem the flow of blood with a handkerchief. 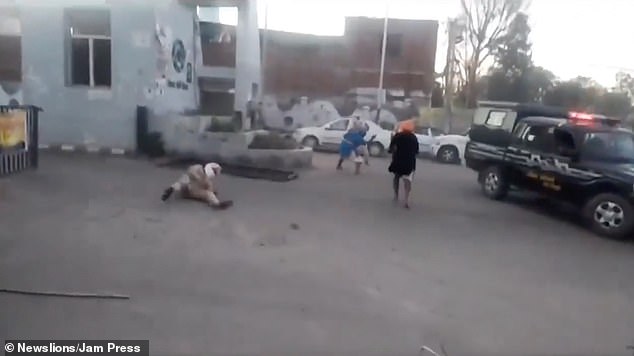 Harjit Singh, an assistant sub inspector with the Punjab Police, was patrolling the barricade outside a vegetable market in Patiala when seven men belonging to the Nihang Sikh warrior sect turned violent 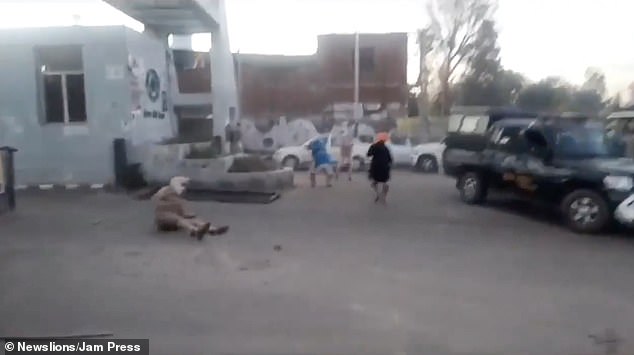 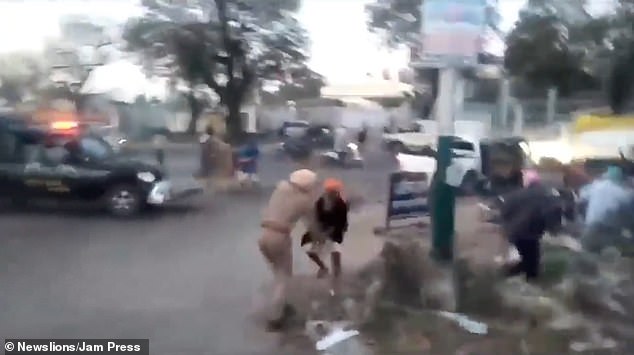 A Sikh warrior wearing an orange turban hacks at the police officer’s arm, removing his left hand from his wrist 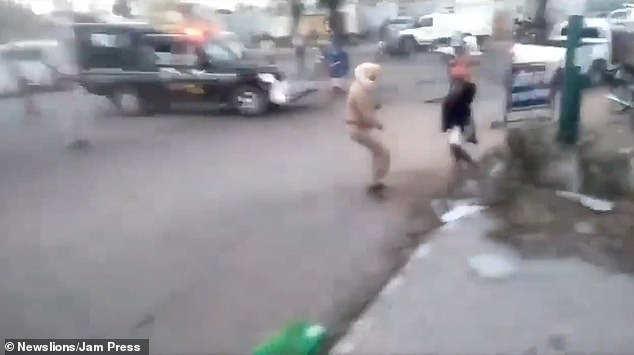 The assailants were arrested and brought into custody, but Singh and six fellow officers suffered injuries and were rushed to the Postgraduate Institute of Medical Education and Research in Chandigarh, according to CNN.

After more than seven hours of ‘painstaking’ surgery, doctors managed to reattach Singh’s severed limb to his left wrist.

Captain Amarinder Singh of the Punjab Police tweeted: ‘Police Party on Naka duty was attacked today in which one ASI’s hand was cut off and six were injured.

‘Police cornered the culprits and have taken them into custody.’

India has been put under a blanket lockdown, effectively quarantining its 1.3billion citizens.

But still the country’s number of cases continues to climb, with around 10,000 cases and 339 deaths. 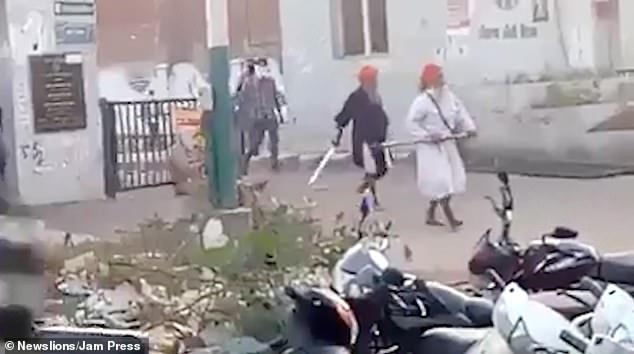 The Sikh warrior clan known as Nihang carry two types of sword, either the curved talwar or the straight-edged khanda 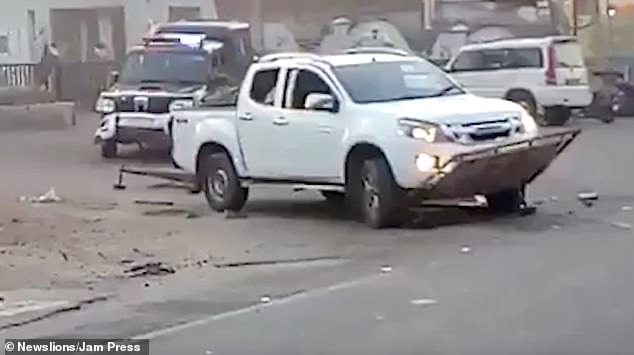 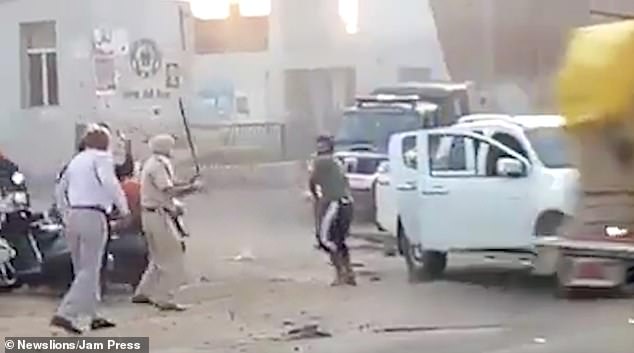 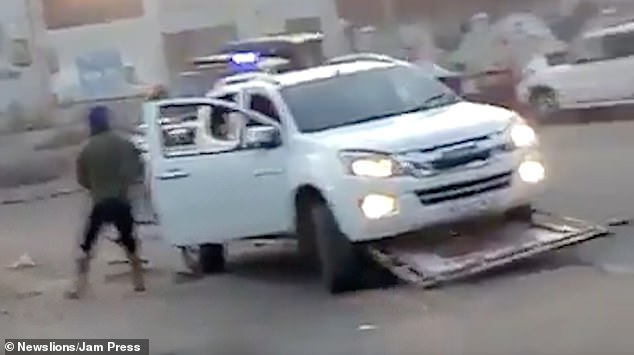 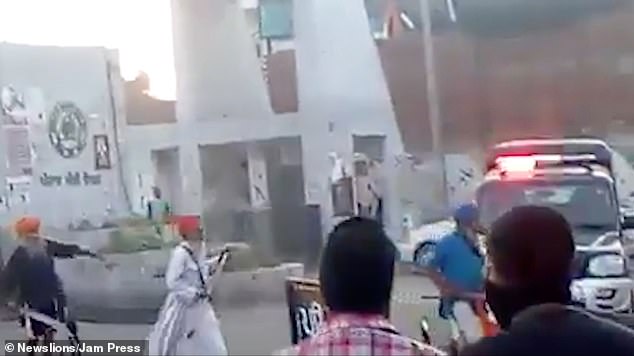 Some experts say India has not conducted enough tests and that the true number of infections is much higher.

And with some of the most crowded cities on the planet, there are fears that numbers could take off and overwhelm the shaky healthcare system.

Prime Minister Narendra Modi today announced the 21-day lockdown imposed on March 25 is to be extended to May 3.

‘From the economic angle, we have paid a big price,’ Modi said in a televised address. ‘But the lives of the people of India are far more valuable.’

‘From the experiences of the last few days it is clear that the path we have chosen is correct.’

Captain Amarinder Singh of the Punjab Police tweeted: ‘Police Party on Naka duty was attacked today in which one ASI’s hand was cut off and six were injured’

India’s current three-week-old lockdown, in force since March 25, had been scheduled to end at midnight Tuesday.

Modi said there would be ‘limited relaxations’ from April 20 for districts with no cases, and new guidelines for industry and agriculture would be released on Wednesday.

The announcement comes as debate rages around the world on how to lift restrictions so that the economic carnage of the pandemic can be eased without a new spike in infections.

Several states including Maharashtra – home to Mumbai and with the highest number of cases – Tamil Nadu and Odisha have already announced lockdown extensions.

The World Health Organisation Tuesday praised India’s decision to extend the lockdown, saying ‘it would go a long way in arresting the virus spread’.

‘Despite huge and multiple challenges, India has been displaying unwavering commitment in its fight against the pandemic,’ WHO regional director Poonam Khetrapal Singh said in a statement. 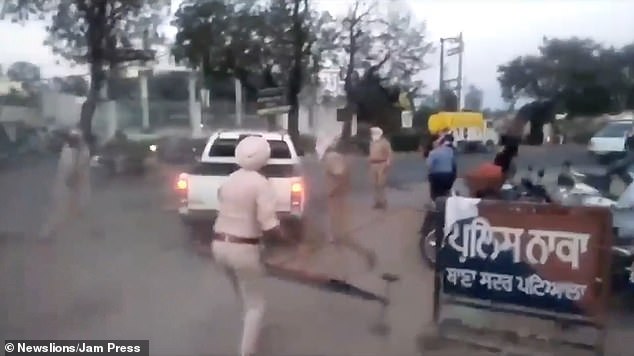 The shutdown, with strict limits on activity, has been devastating for the economy – and in particular for India’s poor.

Millions of daily wage labourers suddenly lost their jobs, forcing hundreds of thousands to travel hundreds of kilometres (miles) back to their home villages, often on foot.

Some died on the way, while others were shunned by locals when they made it back. One clip that went viral on social media showed a group of migrants being hosed down with chemicals by local officials.

Others have been stranded in cities in cramped, unsanitary conditions where the virus could spread quickly.

Farmers have complained of a lack of workers to harvest crops while snarl-ups of thousands of trucks not allowed to move because of the lockdown have hampered food transport.

‘We have tried to keep the interests of the poor and the daily wage workers in mind while making these new guidelines,’ Modi said in his 24-minute address.

‘The central and state governments are working together to ensure that the farmers don’t face any problems.’ 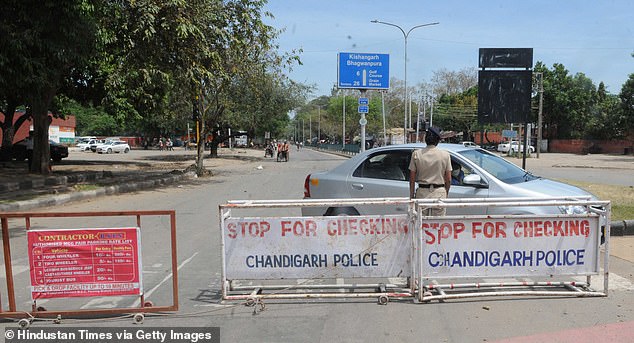 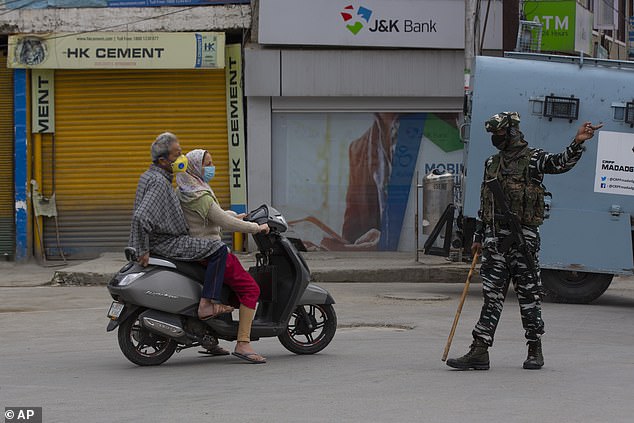 An Indian paramilitary soldier stops people on a scooter during lockdown in Srinagar, Indian controlled Kashmir

Reserve Bank of India governor Shaktikanta Das has called the coronavirus an ‘invisible assassin’ that could wreak havoc on the economy.

A restaurant industry group, a sector that employs millions of people nationwide, warned Monday there could be ‘social unrest’ if it did not receive financial relief.

The commerce ministry has also reportedly urged the government to consider opening more activities ‘with reasonable safeguards’ even if the lockdown is extended.

Even before the pandemic, the Indian economy was stuttering, with the highest unemployment for decades.

Growth had slowed to about 5.0 percent before the pandemic and some analysts say it could slump to 1.5-2.0 percent this year – way below the level needed to provide jobs for the millions coming into the labour market each month.

Hannah B. Is Going Full Beast Mode In These New ‘Bachelorette’ Promos