India’s richest state has announced 15 days of tough new restrictions amid a rise in coronavirus infections.

Maharashtra – which includes the financial capital Mumbai – has been the country’s worst hit state, accounting for about a quarter of India’s 13.5million cases.

Gatherings of more than four people and non-essential use of public transport would be banned.

‘The war has begun again,’ Thackeray said at a press conference. ‘Now is the time for action. 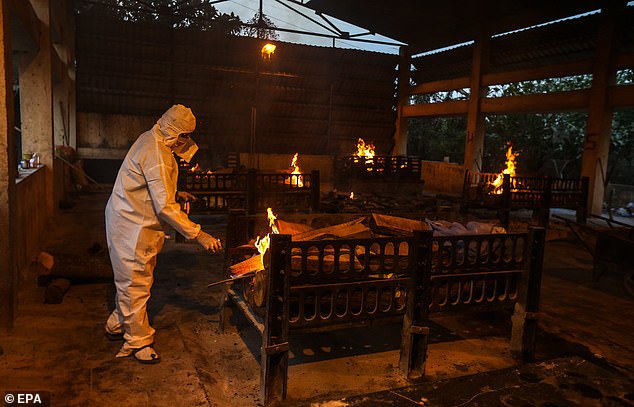 India’s richest state has announced 15 days of tough new restrictions amid a rise in coronavirus infections. Maharashtra – which includes the financial capital Mumbai – has been the country’s worst hit state, accounting for about a quarter of India’s 13.5million cases. Pictured: Relatives and municipal workers in PPE perform the last rites for Covid-19 victims during their funeral on the outskirts of Mumbai on Tuesday

The curbs, which begin on Wednesday and are due to last until May 1, are expected to cripple  manufacturing and other businesses in the region and could hit auto companies like Tata Motors Ltd, Bajaj Auto Ltd and Mahindra & Mahindra Ltd which operate factories in the state.

E-commerce deliveries will be allowed but only for essential products, the government said.

The restrictions will jolt businesses in Maharashtra but also risk having a broader impact on the Indian economy.

The state accounts for nearly 15 per cent of India’s gross domestic product, making it crucial for the country’s economic recovery after months of slowdown. 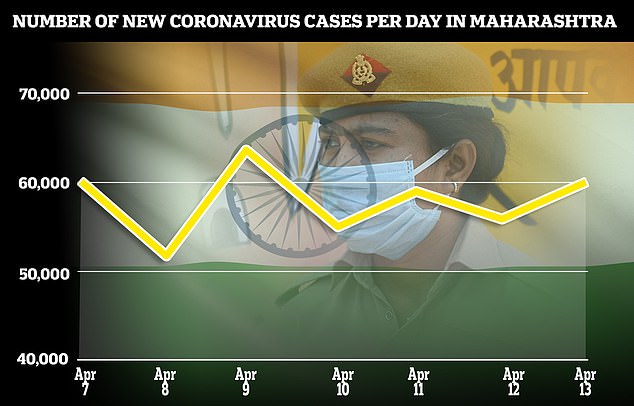 Cases have been rising in Maharashtra, which has reported more than 50,000 new cases each day in the last week 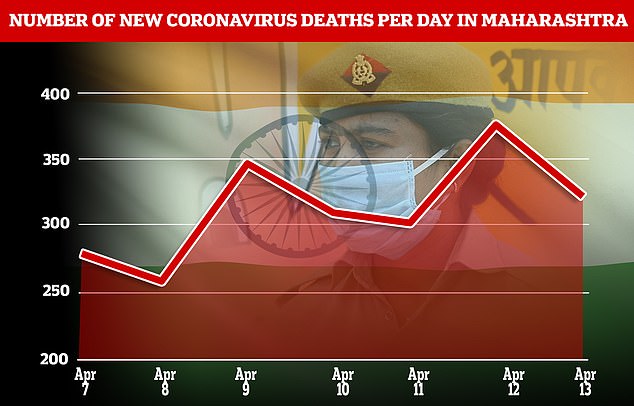 Doctors have said that younger people and even children are now being hospitalised with coronavirus. Pictured: The death toll in Maharashtra over the last week

Maharashtra had already shut down restaurants, bars, gyms, theatres and non-essential stores last week, a move some industry groups had warned will cause economic losses of billions of dollars.

A night-time curfew was also imposed on the state’s 125million people as the it grappled with the rise in cases.

The more stringent restrictions announced on Tuesday said no one should ‘move in public places without valid reasons’ and all public places and non-essential services will remain closed.

Shooting of films and advertisements will also be closed in the state which is home to India’s Bollywood film industry. 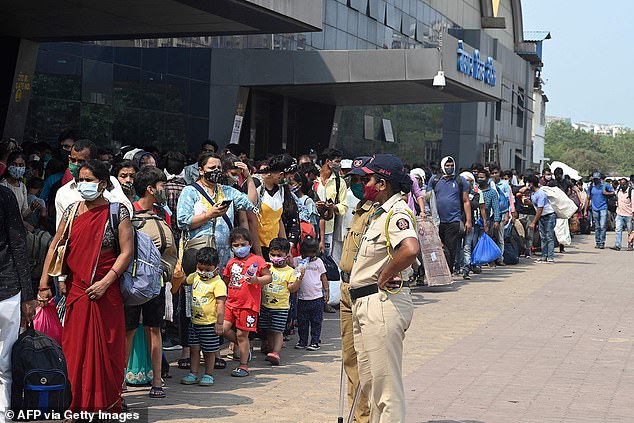 On Tuesday, Maharashtra reported 60,212 new infections and 281 deaths. Pictured: Passengers queue outside the Lokmanya Tilak Terminus railway complex in Mumbai on Tuesday to travel home ahead of the harvest season

On Tuesday, Thackeray acknowledged a lack of oxygen in the state and said the military would assist in seeking supplies.

Kshitij Thakur, a local politician in the Vasai-Virar municipality of Maharashtra, said three people had already died due to the oxygen shortage.

‘The supply can run for only three hours,’ Thakur said in a tweet appealing to Prime Minister Narendra Modi and the central government.

‘There are more than 7,000 active cases in the area and more than 3,000 people require oxygen supply daily.’

Doctors in the state have said that some hospitals are reaching capacity. One described the latest surge as a ‘tsunami’ that ‘has already overwhelmed the healthcare infrastructure in the state.’

Dr Shashank Joshi, a member of the Mumbai Covid task force, told The Guardian that younger people and children are now being hospitalised with severe cases of coronavirus.

‘The capacity for the healthcare system to hold on is fast dwindling,’ he said. 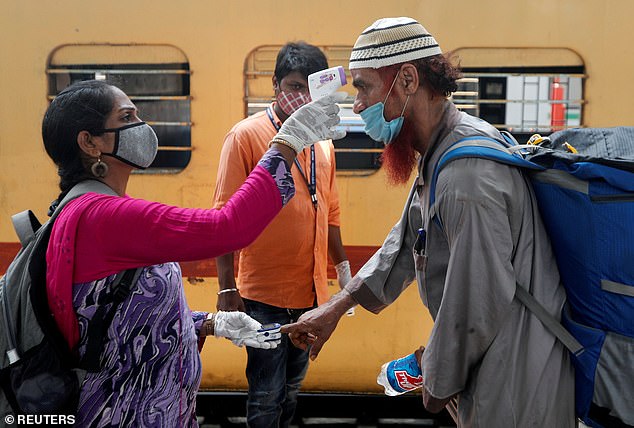 Health officials are split over whether public complacency or potential new variants are responsible for the surge. Pictured: A health worker checks a passenger’s temperature and pulse in Mumbai on April 7

Modi has reportedly asked specialist teams to travel to the state and ascertain why it has seen such a huge spike in cases, the BBC reported.

Health officials are split over whether public complacency or potential new variants are responsible for the surge.

India has reported 13.9million cases of coronavirus since the pandemic began last spring. At least 172,000 people in the country have died from the virus.

On Monday, India overtook Brazil to become the country with the second most Covid-19 deaths worldwide, behind only the United States.

It also faces the largest vaccine rollout in the world, which has proceeded more slowly than expected, with around 100million people having been vaccinated so far, according to the BBC.

On Tuesday, it authorised the emergency use of Russia’s Sputnik V vaccine and agreed to fast-track approval for the Pfizer, Moderna and Johnson & Johnson shots.

The country has already approved the Oxford AstraZenica vaccine and the domestically produced Covaxin.

India has the world’s largest vaccine manufacturing capacity and had exported tens of millions of doses to smaller countries before domestic cases spiked. 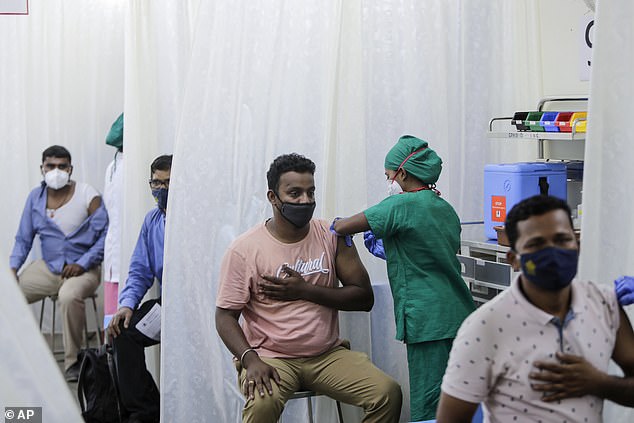 India faces the largest vaccine rollout in the world, which has proceeded more slowly than expected, with around 100million people having been vaccinated so far. Pictured: People receive the vaccine in Mumbai on Tuesday

The worst part about filming KUWTK, according to Kylie Jenner