JAKARTA (Reuters) – Indonesian students rallied for a third day on Wednesday against proposed new laws, including a criminal code that would ban extramarital sex and insulting the president’s honor, a day after clashes in the capital injured more than 300 people. 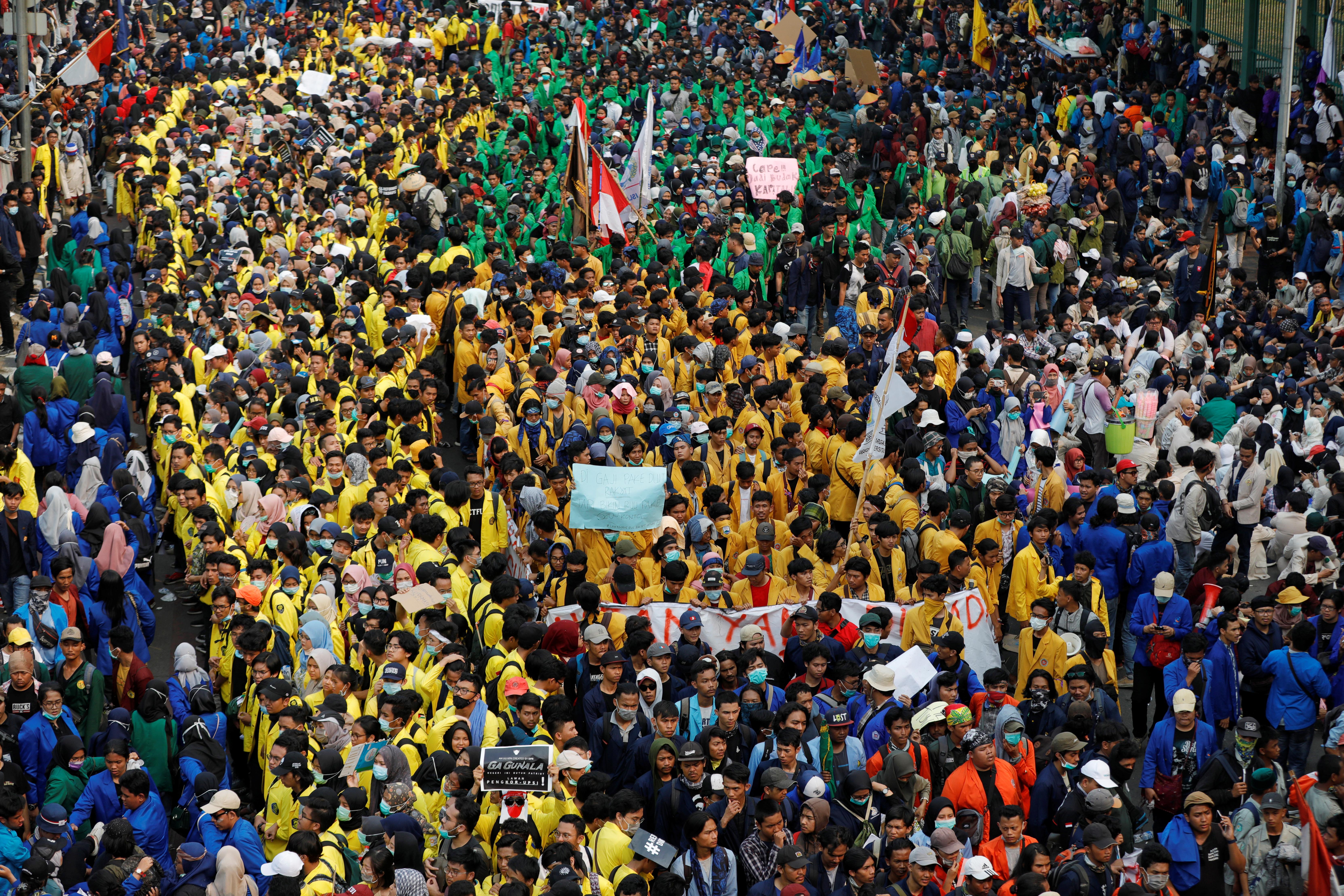 Police fired tear gas and water cannon to break up Tuesday’s rallies in Jakarta and another city, some of the biggest since 1998 student protests fueled unrest that led to the fall of former strongman leader Suharto.

Jakarta police chief Gatot Eddy Pramono said 265 students and 39 police were injured on Tuesday, but the extent of their injures was not immediately clear.

Pramono said 94 people were arrested in Jakarta where skirmishes continued late into the night. Some of those detained had carried petrol bombs, he told reporters.

President Joko Widodo on Friday delayed parliament’s vote on the new criminal code, which would replace a Dutch colonial-era set of laws, saying a new parliament should deliberate on the bill next month.

The revisions to the code include penalties for sex outside marriage, insulting the president’s dignity, a four-year jail term for abortions in the absence of a medical emergency or rape, and a prison term for black magic.

Pramono said police are investigating the role of non-student groups in the protests, but he did not give details.

“If it is proven that they caused damage, whether to the cars or fences, or civilians or security forces, we will take strict measures against them and start the legal process,” Pramono said, referring to fences damaged around parliament.

Aside from opposing the new criminal code, students say they are against changes to a law governing the anti-graft agency, known by its initials KPK, and the appointment of new agency commissioners that critics say will weaken the fight against corruption.

On walls near the parliament building in Jakarta, protesters had scrawled: “Parliament is the state’s clown” and “RIP KPK”.

Students also want a ban on military or police personnel taking up public posts, and the release of “Papuan political prisoners”, referring to the remote Papua region convulsed by civil unrest in recent weeks.

The students also call for stepped up prevention of forest fires blamed for haze problems, and a renewed effort to address human rights issues.

Thousands of students held fresh protests on Wednesday in cities such as Gorontalo, on the island of Sulawesi, and Surabaya in Java, media reported.

Students from the University of Indonesia had not yet decided if they would rally on Wednesday outside parliament in Jakarta, student leader Manik Marganamahendra told Reuters.

On Tuesday, speaker of parliament Bambang Soesatyo held a news conference to urge calm, but he declined to say whether the vote on the new criminal code would be held in the current parliamentary session or postponed to a new session.

On your bike: Parisians hit cycling lanes to evade virus