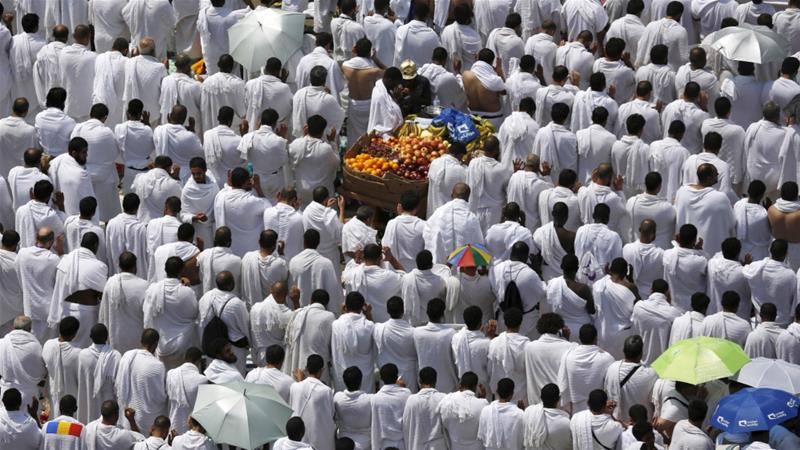 Depok, Indonesia – Saudi Arabia has “politicised” access to the Hajj, according to organisers of a Muslim youth conference in Indonesia.

Ziyad Abdul Malik, chairman of the Muslim Students Association’s (HMI) branch in South Jakarta, lambasted the kingdom for using the pilgrimage to Mecca, considered Islam’s holiest city, to impose its policies on other Gulf nations and Muslim-majority countries.

HMI, the largest student group in Indonesia, organised the event – dubbed “Islamic Holy Places for All of the Ummah”- at the Indonesia University in Depok.

Malik went on to accuse Saudi Arabia of interference in the conference itself. The event was originally slated to take place at the State Islamic University in Jakarta, located in the Indonesian capital, but it was cancelled at the request of the Saudi embassy.

“We are students, and students usually discuss many things,” he said. “Why is this a problem for [Saudi Arabia]?”

‘Only God has the right’

Representatives of Garda Suci Merah Putih (GSMP), another organisation that participated in the conference, argued that Saudi Arabia had violated the conditions of its role as custodian of the Islamic faith’s holiest sites in Mecca and Medina.

“Only God has the right to forbid anyone to go on Hajj, not Saudi Arabia,” Mujtahid Hasheem, secretary-general of GSMP, told Al Jazeera.

Hasheem alluded to the example of Syrian pilgrims, who must go through a committee that is controlled by Saudi-backed opposition groups to obtain visas for the religious journey.

Saudi Arabia severed its diplomatic ties with the Syrian government in 2012 owing to the ongoing civil war in that country.

Saudi Arabia has backed the government in Yemen and has led a coalition of Arab-majority countries in war against opposition groups, such as the Houthi rebels.

Hasheem added that restrictions on citizens of Qatar – which has been blockaded by Saudi Arabia, the United Arab Emirates and others since the summer of 2017 – was further evidence of the kingdom’s wrongdoing.

The pilgrimage is a religious requirement for all able-bodied Muslims who have the financial means to carry out the journey, according to religious guidelines.

Explaining that Indonesia is the most populous Muslim-majority country in the world, Hasheem argued that Indonesians play an important role in ensuring that Hajj access conforms with religious guidelines.

Officials should urge Saudi Arabia to abandon restrictions on the right to worship, Hasheem said.

Shujaat Ali, general secretary of the Muslim Student Organisation of India, accused Saudi Arabia of destroying famous religious sites, such as the birthplace of the Islamic prophet, Muhammad.

Ali cited statistics from the Washington, DC-based Gulf Institute, which estimates that 95 percent of Mecca’s famous buildings have been destroyed in the past two decades.

“What are there now? American companies [like] McDonald’s, Starbucks, and so on,” he said.

The organisers added that they intend to host another international conference in the future to discuss the establishment of an international body to manage Hajj.

“We will invite international scholars and ulemas [a body of religious scholars], and we will even invite Saudi Arabia to join,” the GSMP’s Hasheem added.

Rescue dogs in lockdown: How time is running out for loveable pooches