On a bend of the Yarra River, more than an hour’s drive from Melbourne and far from the polarised world of social media, pandemic politics and policy schisms, sits a group comprising what must be one of Australia’s most unusual religious communes.

The rollcall of residents sounds like the beginning of an old joke: a Catholic priest and classical tantra meditation expert, a Buddhist, a Hindu, a Muslim and a Yogi (walk into a bar…). They spend every night debating the meaning of life and some have been doing so for seven years.

Their ashram, near Warburton, 90 minutes east of Melbourne, was set up by Father John Dupuche as a multi-faith community of debate, humour and celebration of difference. 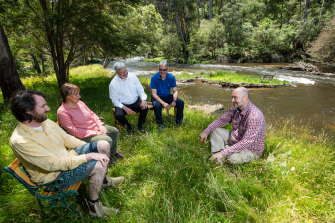 Catholic priest John Dupuche (in white) is a tantra meditation expert who started a multifaith ashram in Warburton. Among the visitors and residents are Cullan Joyce, Maree Santamaria, Sandy Kouroupidis and Andy Torpor. Credit:Jason South

Father John, who has a PhD in Sanskrit, lives with five others who have studied and practised Catholic, Greek and Russian Orthodox traditions, Tibetan and Theravadan Buddhism, Classical Yoga and Vipassana, Western Philosophy, Kashmir Shaivism, and Sunni Islam.

The six residents, most who have jobs and all contribute financially, share a house but spend their time doing their individual practices in their room or in meditation huts overlooking the river. Days are spent in solitude or working together around the farm.

Every night, the motley congregation meditate together then read from a different sacred text before they share dinner and debate, each coming from their own spiritual perspective.

In some ways it’s an anti-cult, or perhaps a cult for contrarians, for a requirement of membership is that you hold different views to any of the other residents.

This is a haven where disagreement is celebrated, but it’s not all peace, love and mung beans. Discussions, sometimes over wine or vodka, can get quite spirited.

“We argue … most of the time we agree to disagree,” says resident Sandy Kouroupidis, a multifaith officer of the Faith Communities Council of Victoria.

“It gets vocal … but at the end of it we have a laugh … and Father John, you like the fight.”

Father John, who is retired but still says Mass at various parishes around Melbourne, pauses before conceding his comrade might be right.

“Sometimes I would have a more definitive point of view that at times I feel [is] a little less flexible than Sandy’s … then I regret getting worked up,” he says.

“I think what we have achieved is the tip of the iceberg … but it requires extraordinary sensitivity.”

The curious grouping is the antithesis of so much of what plays out in the modern world, where everyone has an opinion but it seems many have lost the ability to tolerate opposing views. 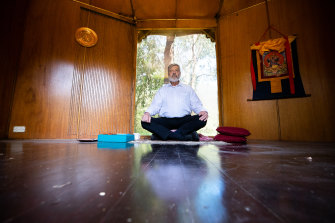 Father John Dupuche in one of the ashram’s meditation huts.Credit:Jason South

“It’s a fellowship, a brotherhood looking after each other,” says Father John, who lectures in spirituality, meditation and interfaith relations at the University of Divinity.

“The diversity enables us to meet at depth … when both eyes look at a pot they don’t see the same – only with both can you perceive depth.”

This hermitude and “table fellowship” perhaps offers lessons to those who find themselves in social media echo chambers where everyone agrees with each other and affirms their membership by condemning, or cancelling, anyone who disagrees.

“When a person is secure in themselves they are not threatened by a different point of view,” Father John says.

“[But] not everyone can do this. It takes a particular type.”

There is a careful vetting process for new members and Father John, who owns the property, notes that they’ve previously had to ask someone to leave.

Kouroupidis agrees their monastic lifestyle suits few people and points out that all residents have studied more than one “faith tradition”.

“We have to be very selective about who comes into the house,” he says.

“You really have to learn the art of listening.

“There is a difference between tolerating and accepting – [it requires] really trying to understand the difference.”

Though the ashram is closed to the public, Father John is open to growing its ranks.

“You could expand it to someone who is atheistic … but would they want to?” he says.

The fellowship was recently tested by a problem many families face this Christmas: they have an anti-vaxxer in their ranks. The group decided the person would be allowed to remain because evicting them for their different view was counter to the ethos of the community.

“We have an anti-vaxxer in our community. We had to have strong consensus.”

So, what exactly do they chew the fat over every evening?

“We discuss China, Trump, everything everyone else discusses,” says Kouroupidis.

But what about football and reality TV?

“I’m happy to discuss those things but no one else wants to.

“There is a lot of laughter. A community without laughter, there is something wrong.”

Hamilton can expect freezing rain for their Wednesday commute

Schoolgirl, 13, ‘raped and strangled by three teen friends before being dumped in trash heap in horrific attack’