‘How does stopping me help the environment?’ Stranded builder who fits INSULATION is held up by M25 eco-mob as he tells how he lost three hours of work that cost him £500

A builder who fits insulation was blocked from doing his job because of a protest by eco-zealots calling for more homes to be insulated.

Self-employed Tom Watson, 37, was on his way back from a client’s home on Monday when he became caught up in Insulate Britain’s M25 protest.

He was filmed shouting at protesters, who had blocked a slip road at Junction 18, Rickmansworth.

Mr Watson, who claims he lost around £500 in lost work, was eventually hauled back by police officers, who wanted to separate him from the eco-mob.

Insulate Britain have blocked the M25 five times in the last eight days to put pressure on the Government to pay for insulation for social housing.

But Mr Watson, of Chorleywood, Herts, has criticised the group from stopping him from doing the sort of work they are demanding.

Mr Watson, who is a semi-pro martial arts fighter, told the Sun: ‘I just wanted to tell them, “Don’t stop me getting to work and doing my job”. 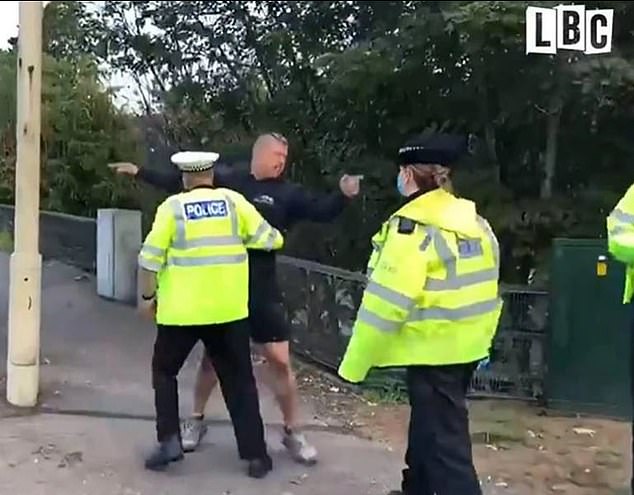 Self-employed Tom Watson, 37, was on his way back from a client’s home on Monday when he became caught up in Insulate Britain’s M25 protest 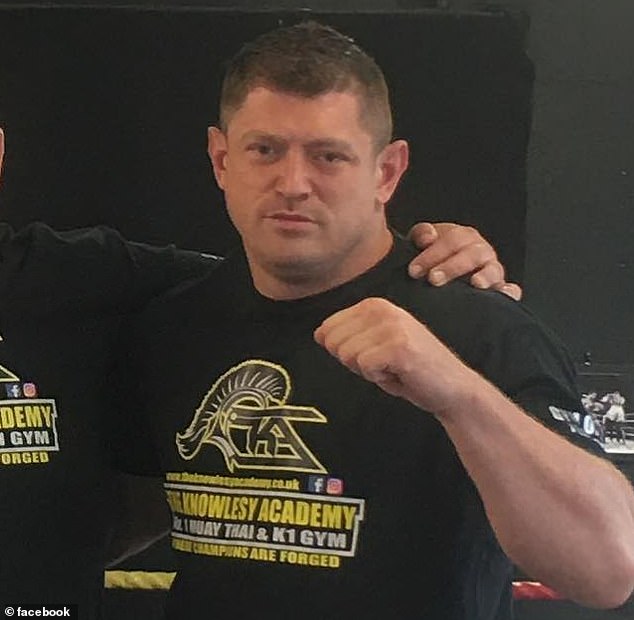 Mr Watson, who is a semi-pro martial arts fighter, told the Sun: ‘I just wanted to tell them, “Don’t stop me getting to work and doing my job”

‘They’re called Insulate Britain. Well, insulating homes is what I do. How does stopping me doing that job help the environment?’.

The builder told the paper that he was on his way back from a job to collect materials from Watford when he was caught up in Monday’s protest.

He was filmed shouting at the protesters in frustration. During the expletive-ridden video, he can be heard saying: ‘I’ve had to go all the way around here because of you,’ before being moved away by police.

Mr Watson, who is the WKO European Muay Thai title-holder, told the Sun he had no intention of ‘getting physical’ with protesters.

He added: ‘As soon as I tried to get anywhere near them, the cops started pushing me, I was doing nothing wrong.’

Along with the junction Mr Watson was stuck at, Insulate Britain also targeted the M25 junctions at Dartford Bridge and the A1M on Monday. A total of 41 people were arrested.

But less than 24 hours later the group were back protesting again. This morning they were seen running onto the main carriageway of the M25, this time at junction 10 for Woking, Surrey.

Drivers were forced to brake and eventually stop on the 70mph speed limit motorway after the group ran into both carriageways from the hard shoulder.

It is the fifth time in eight days that the eco-warriors – who are demanding the Government reduce home heating emissions to zero – have blocked Britain’s busiest road.

It also comes as the eco-mob yesterday offered a ‘profound apology’ for their actions, while one of the group’s ringleaders today revealed protesters ‘hated’ running out into the road.

She compared the demonstrations to the those of women’s rights group – the Suffragettes – whose member Emily Davidson was killed when she ran in front of the king’s horse at the 1913 Epsom Derby. 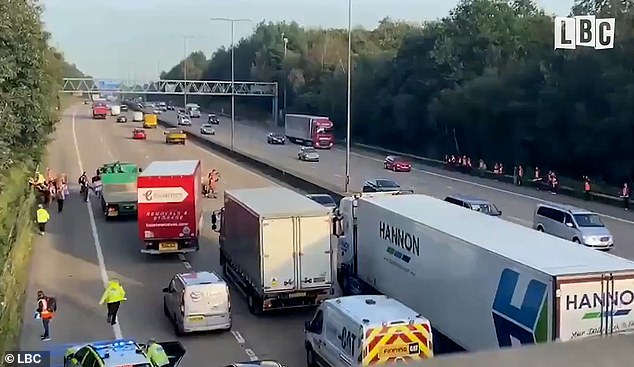 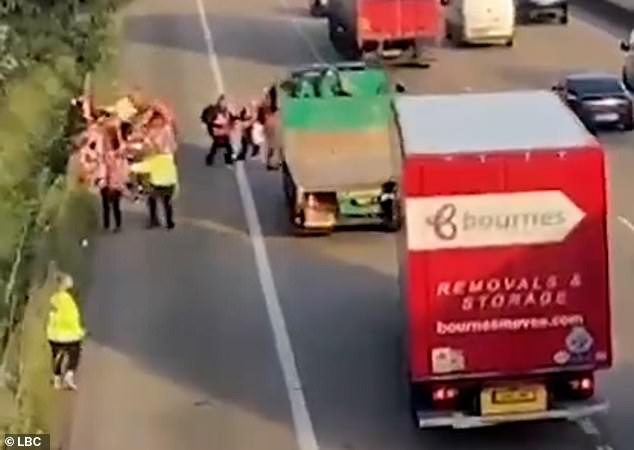 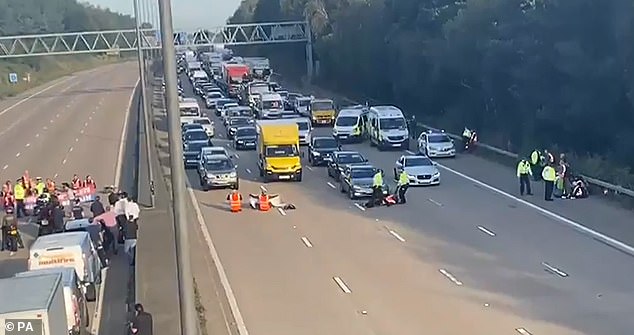 More than 30 protesters have been seen running into flowing traffic near Woking today. There are groups on both sides of the eight lane motorway

But the decision by Insulate Britain protesters to run out into moving traffic on this occasion has drawn particular criticism from police and from road safety groups – who say motorists could have been killed by their actions.

Today Edmund King, AA president, slammed the group’s actions. He told MailOnline: ‘The actions of some of these protestors storming live lanes of motorway traffic are suicidal. It appears that some of these people have a death wish.

‘Their actions not only put themselves at risk but also threaten to cause multiple pile-ups and fatalities.

‘We applaud the police for taking fast action against these counter-productive protests which are alienating the public, causing more emissions and putting lives at risk.’

‘Not only will this cause disruption to commuters on their way to work, but there may be people who miss hospital appointments or worse still emergency vehicles will be delayed which could pose a threat to life.’

It comes as a ringleader of Insulate Britain – who are demanding the Government reduce home heating emissions to zero – today claimed the movement was similar to the Suffragettes.

Zoe Cohen made the claim as she revealed that protesters ‘hated’ blocking the motorway in order to put pressure on the Government to support their aims.

She told Nick Ferrari on LBC: ‘It’s not about justifying [potential injuries to activists and motorists]. Our Government is failing to protect British families.

‘Thousands of people will die this winter from fuel poverty. Millions will struggle, we don’t know if we can eat at Christmas.

‘We hate doing this, we don’t want to do it. We have to cause disruption. It is the only thing we have left in our liberal democracy. We are not really expecting to get public support the Suffragettes were hated at the time.’

The latest protest lasted around 40 minutes and involved around 30 protesters split between each side of the eight lane motorway. Motorists faced five mile tailbacks on either side of the motorway, through to junctions 9 and 11 respectively.

Surrey police say they have arrested 38 people in relation to the protest. Chief Superintendent Jerry Westerman said: ‘Protesters have put their own lives, as well as those of others, at risk by walking onto both carriageways of the M25 during rush hour traffic.

‘Fortunately, we were on scene within three minutes of the first call coming in and took swift and robust action to ensure protesters were removed from both carriageways after they ignored our requests to move on peacefully.’

Restaurant in China apologises after asking diners stand on scales

Celebs who were never the same after being locked up