Intensive care medics are the LEAST likely staff to catch coronavirus in hospitals because they are first in line for PPE, finds study in Birmingham NHS trust – and cleaners are at greatest risk

Intensive care staff were the least likely health workers to contract coronavirus at the peak of the pandemic – despite dealing with the sickest and most contagious patients, a study has found.

Researchers say ICU staff may have been shielded from infection because they were first in line for personal protective equipment (PPE), which the UK was in dire shortage of during the darkest days of the crisis.

Cleaners were twice as likely to get the disease as ICU staff or frontline doctors and nurses, possibly because they were bottom of the pecking order when it came to accessing PPE.

The findings come from a study at University Hospitals Birmingham NHS Foundation Trust (UHBFT), one of the worst-hit trusts in the country. 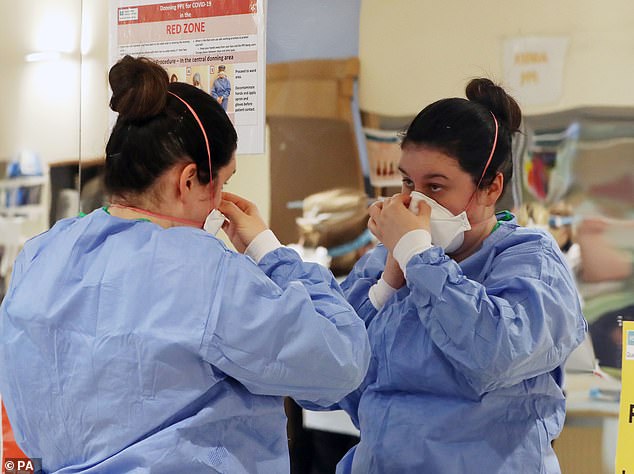 National guidance says hospital workers must wear different grades of PPE depending on the section they work in. Pictured: A healthcare worker in Britain putting on PPE, May 5 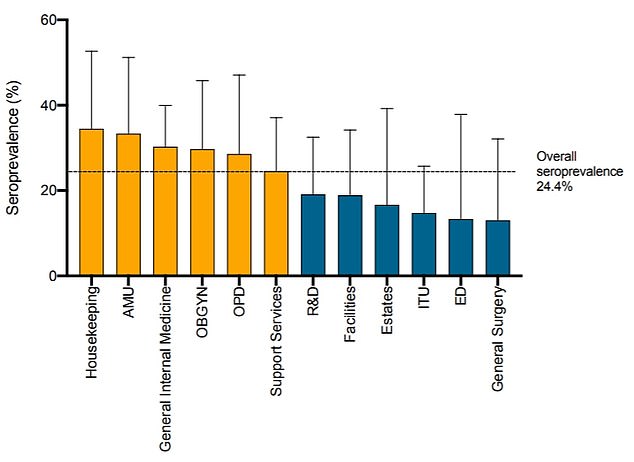 Pictured: Cleaners (‘housekeeping’) were most likely to test positive for antibodies (34.5 per cent). The lowest ‘seroprevalence’ was found among staff working in intensive care medicine/ICU (15 per cent), emergency medicine/ED (13 per cent) and general surgery (also 13 per cent). OBGYN is obstetrics and gynecology while R&D is research and development

Antibody testing was done on more than 500 workers, finding a quarter had been infected with the coronavirus at some point in the past – four times higher than in the general population of the West Midlands at the time.

The overall prevalence of antibodies was 24 per cent, compared with six per cent generally in the Midlands at the time, as determined by research by PHE.

When the researchers looked at the figures by department, ‘striking’ differences in antibody positivity emerged.

Cleaners were most likely to test positive for antibodies, with 34.5 per cent having the blood proteins, followed by clinicians working in acute medicine (33 per cent) or general internal medicine (30 per cent).

The lowest ‘seroprevalence’ was found among staff working in intensive care medicine (15 per cent), emergency medicine (13 per cent) and general surgery (also 13 per cent).

One in 50 NHS patients have now been waiting a year or more for planned surgery due to treatment delays caused by coronavirus.

NHS England data released today shows 83,000 patients (2.1 per cent) referred for routine operations have still not been treated after 52 weeks.

Those most affected include people waiting for hip and knee replacements, cataract surgery or to have painful kidney stones removed.

Statistics also show the number of those waiting for elective ops for more than 18 weeks is at a 12-year high, with more than two million Britons now overdue.

Hospitals are struggling to get through the slog of patients waiting for ops because they shut down all non-emergency treatment for months during the crisis. They are still only running at a fraction of their usual capacity.

There are currently four million people on waiting lists for elective surgery but NHS bosses expect that number to grow to a record 10million by the end of the year.

Those in intensive care had to cover themselves head-to-toe in multi-layers of medical protective gear – face masks, visors, goggles, gloves and more.

But outside the Covid-19 high-risk areas, hospital staff may have only required a standard face mask.

The study also found those of Black, Asian and Minority Ethnic (BAME) backgrounds were nearly twice as likely to have already had the infection compared to their White colleagues.

Study lead author Professor Alex Richter explained that, at the height of the pandemic, five patients with serious Covid-19 infection were being admitted every hour.

But there was no national NHS staff testing capacity, so no way of knowing who was infected.

Professor Richter, of the Clinical Immunology Service at University of Birmingham College of Medical and Dental Sciences, said: ‘You’ve got to remember that we are all key workers, so travelling on public transport, and out and about.’

To find out how coronavirus was spreading in the hospital, she offered to test staff with no COVID-19 symptoms for a study – published today in the British Medical Journal ‘Thorax’.

The study would look for active infection with an antigen test, that uses swabs. It would also detect previous infection that the person has since recovered for, using blood, called an antibody test.

The antibody test was a highly sensitive ELISA test, developed inhouse by the University of Birmingham Clinical Immunology Service. ELISA tests are considered high standard and are used by Public Health England (PHE).

Professor Richter said: ‘I’ve never recruited to a study so fast in my life. We recruited 545 staff in 20 hours.’

All the staff were at work over the course of 24 hours between Friday 24 and Saturday 25 of April, around a month after Britain went into lockdown.

They were asked to report any illnesses consistent with Covid-19 that they had had in the previous four months. Information on ethnicity and department of work was also collected.

Professor Richter said: ‘We presumed intensive care workers would be at highest risk. But workers in ITU are relatively well protected compared with other areas.

‘The reasons underlying this are likely to be multifactorial.’

For example, she noted that in accordance with national guidelines, intensive care units were designated high-risk environments and were given ‘enhanced PPE’, such as high-grade medical masks.

In contrast, fluid-resistant surgical masks were recommended in other clinical areas. These are the blue ones you tend to see among the public.

There was also an ethnic divide in antibody rates, according to the findings, with workers of BAME backgrounds nearly twice as likely to have already had the infection as their white colleagues (23.2 per cent).

This was even after accounting for where people lived, considering Government research has found those who live in poorer areas are more at risk of Covid-19.

Those with Black African heritage had the highest seropositivity (50 per cent), followed by those of mixed heritage (40 per cent) and Asian British Pakistani (36.4 per cent).

The findings showed nearly one in 40 staff (2.3 per cent) with no symptoms tested positive for SARS-CoV-2, the virus responsible for Covid-19 infection, during the study period. 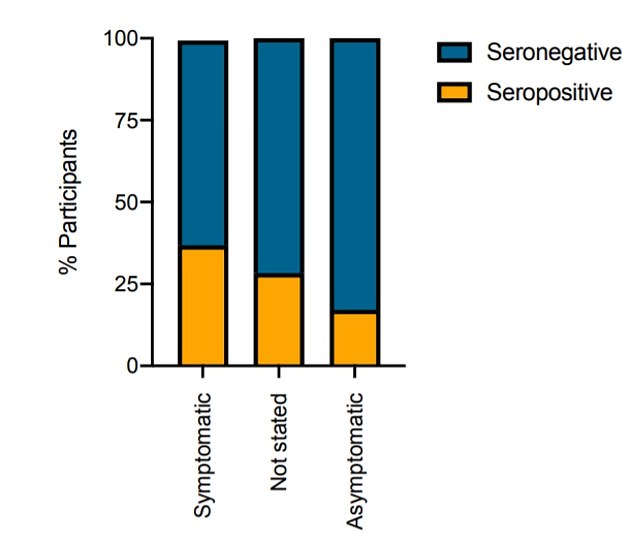 Of these, 38 per cent subsequently developed Covid-19 symptoms, meaning 62 per cent of people who got a positive result never showed signs of the disease.

Just over a quarter of the workers said they had previously had symptoms consistent with Covid-19 infection.

Staff with previous symptoms were ‘significantly more likely’ to have antibodies (37 per cent) than those who hadn’t had symptoms (17 per cent). And they had higher levels of antibodies.

Those whose who had a positive test and also remembered having symptoms were most likely to say they were sick in the week beginning 28 March – a week before deaths soared to their peak in the hospital.

Professor Richter pointed out the study was observational, meaning they can only make conclusions based on what they observe without intervening.

And not all participants provided all the information requested. Nor is it known whether symptomless infection among staff puts hospital patients at risk.

However, Professor Richter said: ‘Our data would support the assessment of widespread healthcare worker testing, including track and trace, on viral transmission during future waves of a pandemic.

‘All these factors are important for considering what’s going to happen this winter.

‘Cases are on the rise. Are we going to have another surge? If there is one, how do we protect healthcare workers this winter?

‘And let’s think not just about SARS-CoV-2 and the lessons we can learn for other pandemics, but seasonal infection. Influenza has a massive impact on the NHS every winter.’

The findings could be particularly relevant for any second coronavirus surge or seasonal flu this winter, the researchers said.

UHBFT is one of the biggest hospital trusts in Britain with more than 20,000 employees caring for 2.2million people every year.

'Below Deck Sailing Yacht': Madison Stalker Shares the Moment She Knew She Would Be Forever Friends With Parker McCown and Georgia Grobler