On January 20, enduring its third coronavirus wave under yet another lockdown, Israel recorded its first 10,000-case day alongside more than 100 deaths.

Less than a month later, it is slowly reopening businesses. The average age of hospitalisation for severe COVID-19 dropped from 69 to 63, and the number of severe cases has declined from about 1200 to 935 within six weeks. On Sunday, there were 3400 new cases and 32 deaths in Israel. 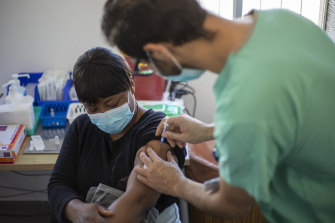 What changed? As of this week, 28 per cent of Israelis have received both doses of Pfizer’s vaccine and an additional 43 per cent have received their first. The country has the highest rate of vaccination in the world, according to Bloomberg’s vaccine tracker.

Israel’s vaccination program, which began on December 19, initially focused on over 60s and healthcare workers. More than half of Israelis had received their first dose of the vaccine within five weeks.

Nurses were authorised to administer it without the need for a doctor to increase speed at mass vaccination hubs established at community facilities. At the end of each day, WhatsApp groups spread news of which hubs had remaining doses – which need to be kept at minus 70 degrees, leading to longer-term storage issues – prompting local media reports of lines of younger people to receive what was left.

By last Sunday, 90 per cent of Israel’s over 60s had their first dose. Seventy-three per cent of Israelis aged between 40 and 60 and about half of the youngest cohort in its vaccination program – aged 16 to 40 – have also been vaccinated.

“They set a target, they set about saying: right, we’re going to get the best vaccine we can get our hands on, and we’re going to get as many people vaccinated as quickly as possible,” said UNSW Professor Raina MacIntyre, who believes the speed of Israel’s rollout was key to its outcomes.

Pressure to get vaccinated has been high. Only the vaccinated can access gyms, hotels and movie theatres when Israel begins to reopen this week and the Prime Minister, Benjamin Netanyahu, is backing proposed legislation which will allow local authorities to name and shame unvaccinated residents.

Israel also received a significant leg-up in the race to vaccinate: as other countries faced shortages last month, it signed an agreement with Pfizer for 10 million doses in exchange for anonymous health data about its residents to study how mass vaccination can lead to herd immunity.

Among the 600,000 Israelis who have received both of their Pfizer doses, preliminary data released on Monday indicated a 94 per cent drop in symptomatic COVID-19 cases, a figure very close to the 95 per cent efficacy in clinical trials.

“The larger part of that trial was in older, healthy adults, so to know that it’s having the same efficacy in older adults is actually really good, because generally after the age of 15 your immune system begins to decline,” Professor MacIntyre said.

Although the data, which has not been peer reviewed, indicates the vaccine’s “real world experience” reflects the trial, Associate Professor Paul Griffin from the University of Queensland was hesitant to attribute the statistic entirely to vaccination, or assume the result would be replicated.

“They had a very large number of cases and it’s very likely that this wasn’t the only intervention that might have helped to reduce some of that transmission,” he said, citing the nation’s lockdown, as well as increased caution in the population during high case numbers.

Israel’s rollout has not been perfect: there are concerns about low rates of vaccinating in Arab and ultra-Orthodox Jewish communities and the rate of vaccination among younger people has started to slow, with rates of severe COVID-19 among under 60s not showing the same decline as in older populations.

In Australia, Dr Griffin said, there will be different metrics for success when our first vaccines are administered next week such as fewer leaks from the hotel quarantine system, whose workers are among the first to be vaccinated.

Professor MacIntyre said Australia would need to speed up its rollout timeline and become less reliant on the less effective AstraZeneca vaccine to see comparable results.

Get our Coronavirus Update newsletter

Stay across the news you need to know related to the pandemic. Sent Monday and Thursday. Sign up here.

'This Is Us': Randall and Beth Discuss His Therapy Appointment

Trump to intensify campaign schedule, will be speaking at battleground states