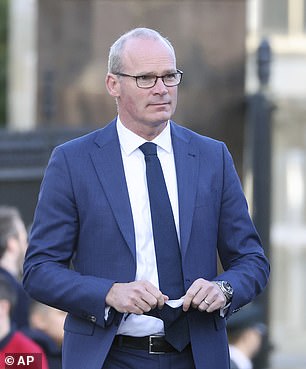 Britain was warned today that no-deal Brexit is back on the table if the Northern Ireland protocol is suspended.

Irish foreign minister Simon Coveney turned up the temperature in the talks by threatening ‘very serious’ consequences if the Article 16 mechanism is triggered.

Although he stressed Brussels could go a ‘little further’ to ease the implementation of the rules, Mr Coveney said the trade agreement was ‘contingent’ on the divorce terms being honoured.

The sabre-rattling came after a meeting between Lord Frost and the EU’s Maros Sefcovic failed to break the impasse last week. The pair are due to hold more talks in London later this week.

The bloc says it has already ‘bent over backwards’ to make concessions on the implementation of the protocol, which was part of the Withdrawal Agreement.

However, key disagreements remain, including over the role of the European Court of Justice in any disputes. The new arrangements have been blamed for fuelling sectarian tensions in Northern Ireland as loyalists demand it is scrapped altogether.

Mr Coveney insisted the EU was in ‘solutions mode’ and wanted to do whatever it could to streamline checks required on goods moving from the British mainland to Northern Ireland.

However, he told RTE Radio there was a limit to the EU’s flexibility and criticised the UK’s hard line, after Lord Frost insisted suspending the protocol is still ‘on the table’.

He complained that Britain was asking for a lot while offering nothing in return. 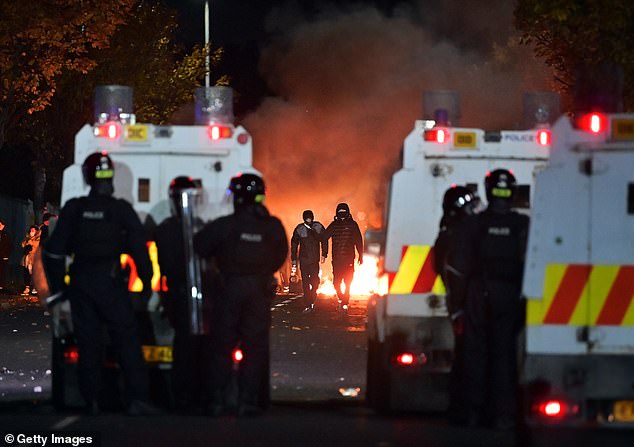 Protests in Belfast last week, amid fears the protocol is fuelling sectarian tensions

‘I believe that if the British government essentially refuses to implement the protocol, even with the extraordinary flexibilities that are now on offer, and instead looks to set it aside then I think the EU will respond in a very serious way to that,’ Mr Coveney said.

He said that did not mean the introduction of a hard border on the island of Ireland.

The minister added: ‘It means that the Trade and Co-operation Agreement that was agreed between the British government and the EU was contingent on the implementation of the Withdrawal Agreement, which includes the protocol.

‘One is contingent on the other. So if one is being set aside, there is a danger that the other will also be set aside by the EU.’

Mr Coveney said he ‘certainly hoped’ the UK and EU were not doomed to have a trade war, but questioned whether ministers were acting in ‘good faith’.

‘The EU has shown remarkable flexibility within the confines of the protocol to try to respond to legitimate concerns that have been expressed in Northern Ireland and the response to those flexibilities and efforts towards agreeing compromise from the British government side has been to harden their position, and instead of focusing on solutions to constantly raise new problems.,’ he said.

‘You have to ask yourself the question, why are they doing that, if they’re acting in good faith, and if they want solutions?’

‘The negotiating tactic of the British government of the Prime Minister and of Lord Frost has been very consistent – it has been to offer nothing and to continue to ask for more,’ he said. 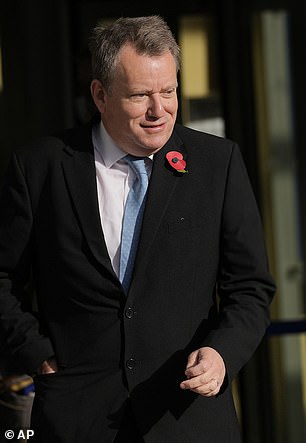 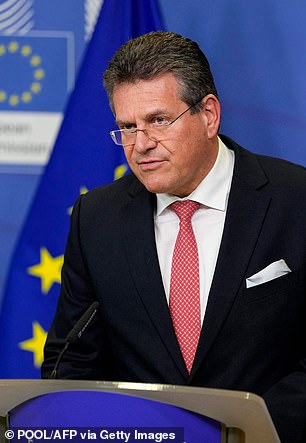 The sabre-rattling came after a meeting between Lord Frost (left) and the EU’s Maros Sefcovic (right) failed to break the impasse last week. The pair are due to hold more talks in London later this week

‘In the short term that is a successful negotiating tactic because throughout this year each month that passes the EU has tried to provide new solutions, new answers, new compromises, more flexibility and so on.

‘But, at some point, the EU says ‘enough, we are not negotiating with a partner here that is acting in good faith’.’

Meanwhile, Keir Starmer warned Labour will not back the government if it suspends the protocol.

Sir Keir told the BBC’s Andrew Marr Show: ‘I don’t think that triggering Article 16 will resolve the dispute in relation to the Protocol in Northern Ireland.

‘Because of the way the protocol was drafted, because of what the Prime Minister signed, it is perfectly true that there are checks from Great Britain to Northern Ireland – we want to reduce those.’

He added: ‘What I am saying is don’t rip up the protocol because that has that very important central purpose, which is to protect the no border in Northern Ireland.’

‘Élite’ Season 4: Release Date, Plot, New Cast Members, and Everything Else We Know So Far