A worldwide state of terror: Map shows how ISIS continues to wreak carnage across the globe, despite losing its ‘caliphate’

A map of the most prominent ISIS terror attacks in 2018 shows that while the power of the Islamist extremist group has dwindled, they are far from defeated.

Although the terror group lost nearly all of what remained of its territory in Syria and Iraq in 2017, ISIS remains very active across the Middle East with the capacity to carry out lone wolf or small cell attacks in the West.

This infographic map shows that ISIS has laid claims to attacks on both U.S. and French soil in the past few months, as well as killing dozens across the Middle East and broader Muslim world. 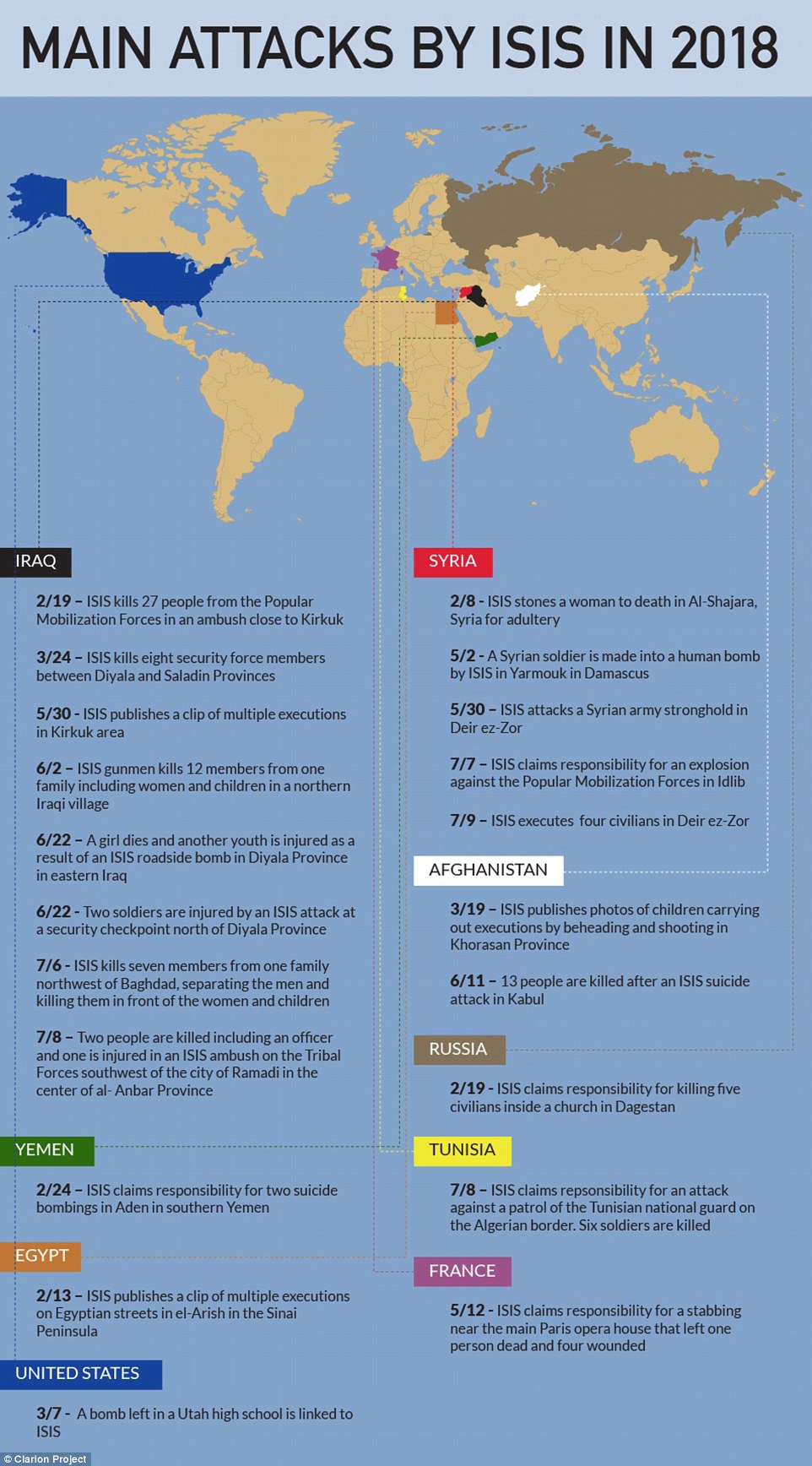 It details eight serious attacks in Iraq from February until last week, including the murders of 27 people in an ambush in Kirkuk and the execution of 12 members of one family, including women and children in northern Iraq.

Five major attacks took place in Syria, including suicide bombings and the stoning to death of a woman in Al-Shajara.

As well as taking responsibility for suicide bombings in civil war-ravaged Yemen and publishing videos of executions in Egypt and Afghanistan, ISIS has also claimed they were behind an attack against a Tunisian military patrol on the Algerian border on Sunday.

ISIS previously claimed responsibility for the February terror attack on a church in Dagestan, Russia, where five civilians were killed, and the stabbing in central Paris carried out by a lone wolf attacker in May.

The teenage student who failed to detonate a home-made bomb at a high school in Utah, United States, in March, had been ‘researching information and expressing interest in ISIS and promoting the organization,’ according to police.

Ran Meir, Arab affairs analyst for the Clarion Project, who put together the map, said that while the fall of ISIS’s caliphate is ‘one of the greatest victories against terror in recent years’, the organisation is very much ‘still out there’. 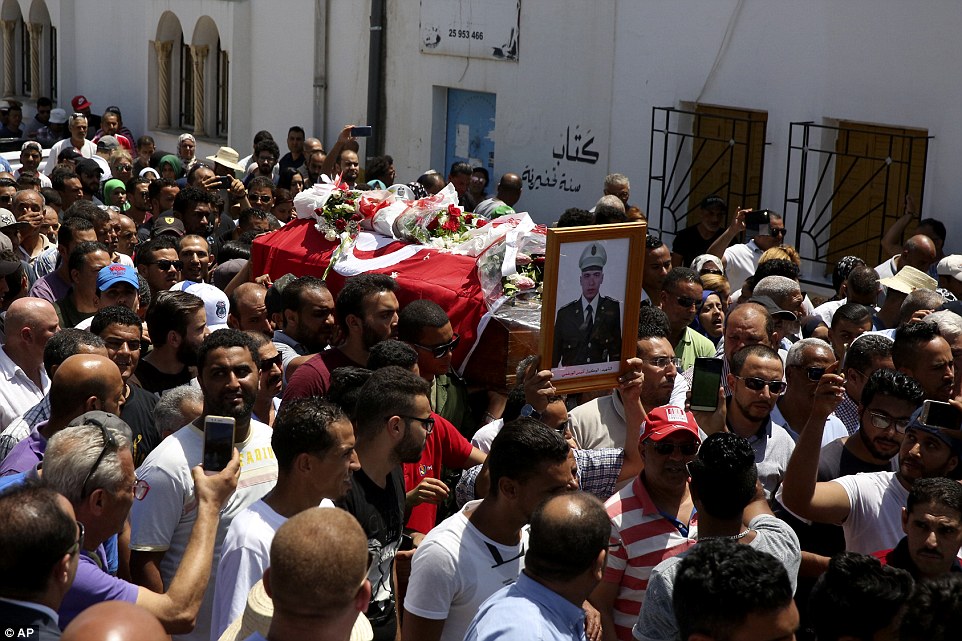 Attacks: Family members and relatives attend the funeral procession of one of the national guards killed in an attack in Rades, south of Tunis, Tunisia on Sunday, for which ISIS claimed responsibility 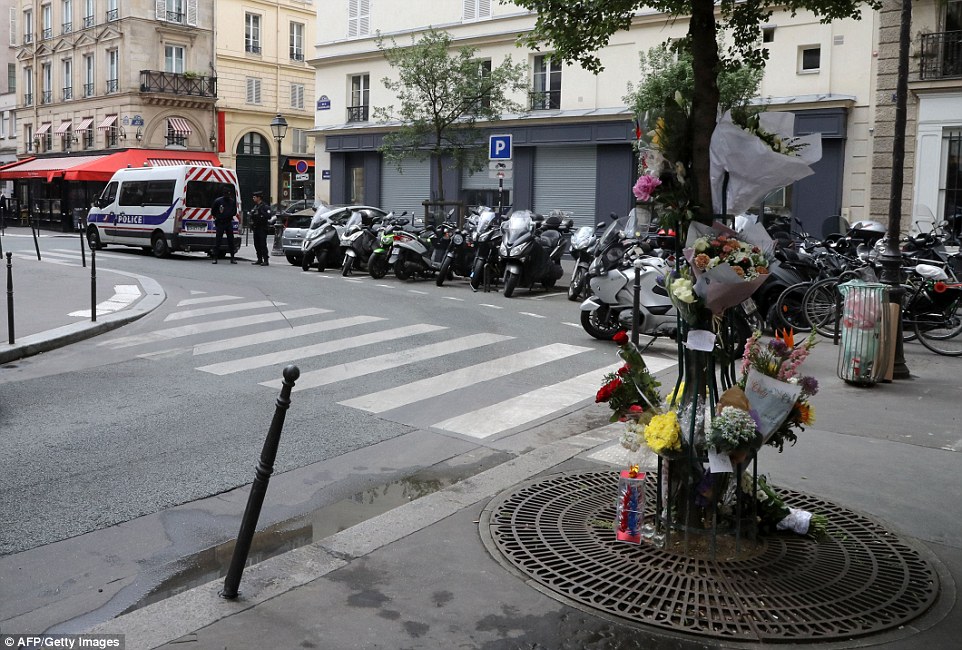 Western lone wolf: Floral tributes adorn a tree on a pavement in Paris  in May, close to the site of a knife attack which left one dead and four injured that has been linked to ISIS

‘After ISIS went underground, it became much harder to locate the operating forces. It’s easy for ISIS to act in places they used to dominate and where it still has some local support and resources, like Syria and Iraq.

‘ISIS still has a number sleeping cells around Europe and the United States, and many people in the West still believe in the concepts and ideology of ISIS.

Meir and the Clarion Project, a non-profit organization that educates the public about the dangers of radical Islam, are clear in stating that the map only shows ISIS’s main attacks in 2018. 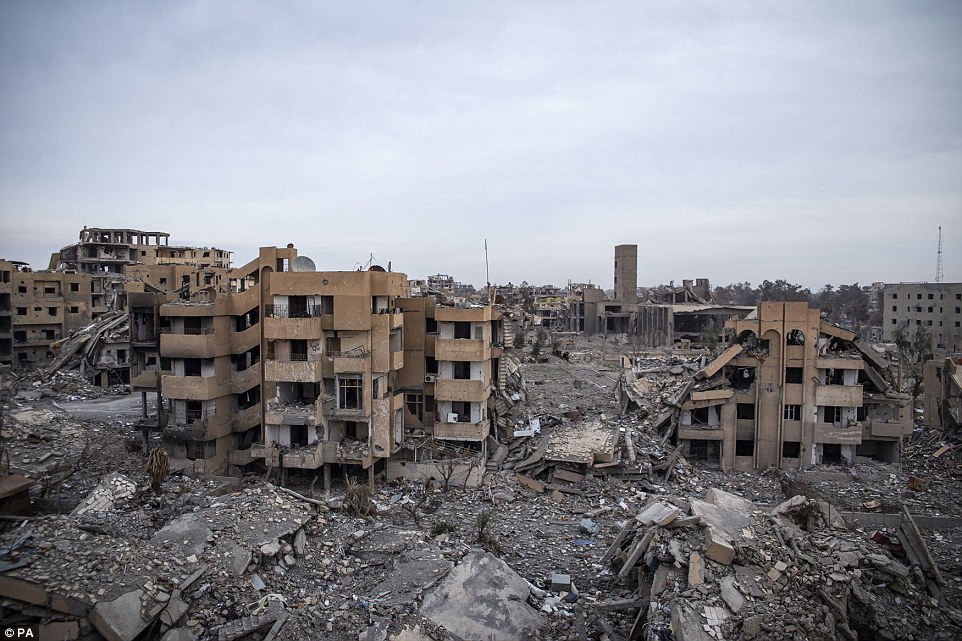 Left behind: This image shows destroyed buildings in Raqqa, Syria, which was officially declared liberated last year, but where ISIS still has supporters who operate in darkness, enabled by the ongoing Syrian civil war

By early 2014, Al-Qaeda had disavowed links to the new terrorist group, and the Islamic State had begun expanding their territory into Syria.

Over the past three years, IS has gradually been driven out of nearly all the territory it once held in Syria and Iraq, but the group still maintains a presence in the Syrian desert and remote areas along the Syria-Iraq border.

Yesterday, the Syrian government widened its offensive to an enclave held by an ISIS-affiliated group known as Khalid Ibn al-Walid Army

The bombardment targeted the Yarmouk Basin area, which borders the Israeli-occupied Golan Heights and Jordan.

In retaliation, ISIS launched an attack southwards on Heet, a rebel-held town that recently agreed to return to regime control. They also claimed responsibility on Tuesday for a suicide car bombing in Zaizun that left 14 fighters dead.