Flight of friendship: Israeli and German fighter jets flyover Dachau death camp and nearby airbase to mark the countries’ fight against anti-Semitism and the 1972 Munich massacre

Israeli and German fighter jets will today honour Holocaust victims with a symbolic flyover of Dachau concentration camp to mark the countries’ fight against anti-Semitism.

Israeli F-16s and Eurofighter jets of the German Luftwaffe will also overfly the nearby Fuerstenfeldbruck airbase to commemorate the massacre at the 1972 Munich Olympics that left 11 Israelis dead.

One Israeli officer, whose grandfather was a Holocaust survivor, said it will be ‘a very moving event for everyone.’

The aerial tributes will be the highlight of two weeks of manoeuvres that will see Israeli air forces train on German soil for the first time. 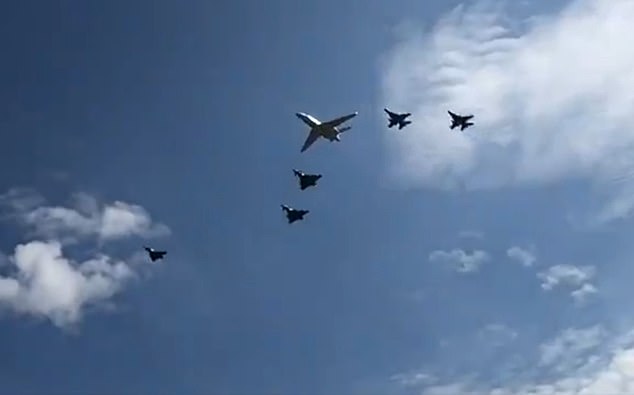 Israeli and German fighter jets flying over Fuerstenfeldbruck airbase on Tuesday morning. The airbase was the scene of carnage on September 5, 1972 when a shootout occurred between German forced and Palestinian terrorists of the Black September Organization 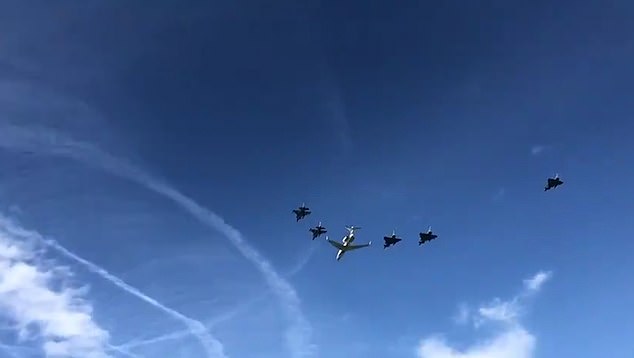 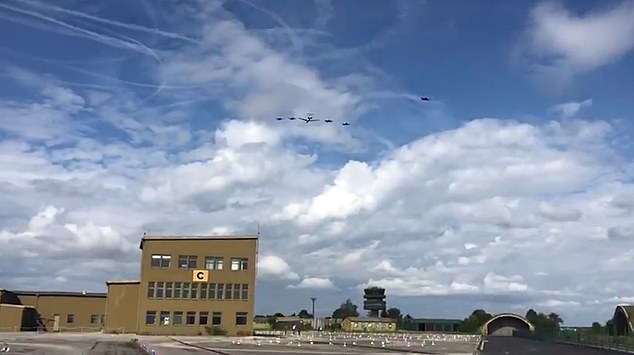 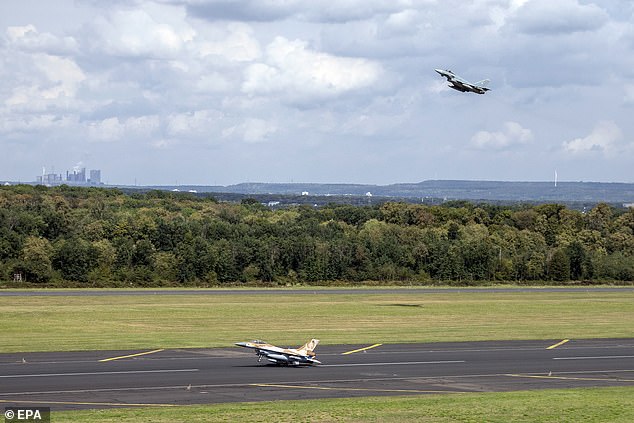 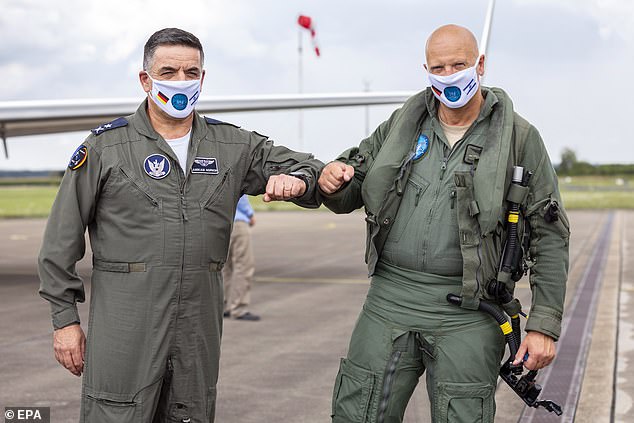 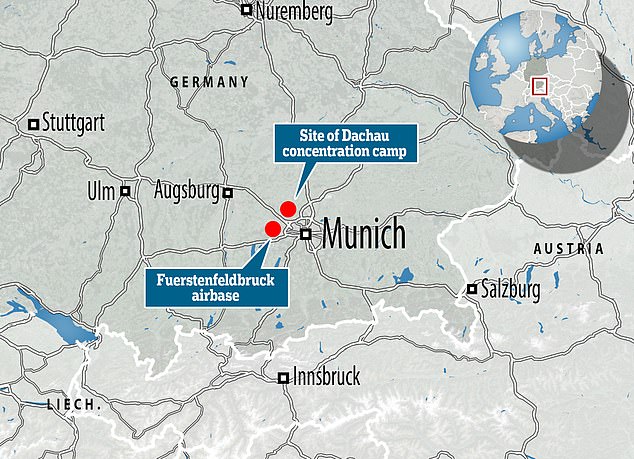 Because of the coronavirus pandemic, it is the only training mission the Israeli Air Force (IAF) is conducting abroad this year.

Luftwaffe chief Ingo Gerhartz in a statement called the joint exercise ‘a sign of our friendship today’.

He said it was also a reminder that Germany has an enduring responsibility ‘to fight anti-Semitism with the utmost consistency’ because of its Nazi past.

The IAF said the mission, which runs until August 28, will give its pilots a chance to practise in unfamiliar surroundings and will include simulated dogfights, air-to-ground battles and missile threats. 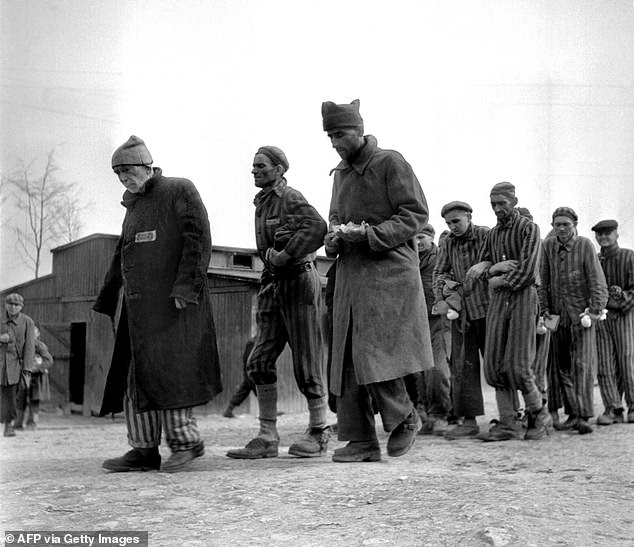 Weak and ill survivors of the Nazi concentration camp in Buchenwald march April 1945 towards the infirmary, after the liberation of the camp by Allied troops. Buchenwald was one of the camps which complemented Dachau to the south, where more than 41,000 Jews were killed. 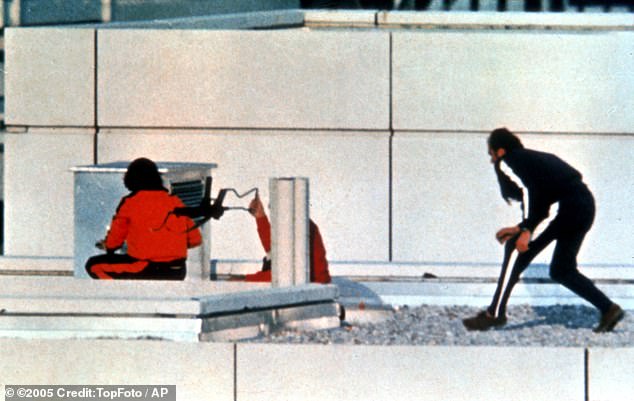 Two West German policemen wearing athleitic sweatsuits and armed with submachine guns get into position on the roof of the Munich Olympic village building where Palestinian terrorists held members of the Israeli Olympic Team hostage on September 6, 1972

Dachau, near Munich in Germany, was the first concentration camp set up by the Nazis in 1933 and would become the model for all SS-operated death camps.

It was opened by Heinrich Himmler, one of Hitler’s most trusted commander and the main architect of the Holocaust.

During the Second World War the main camp had 150 smaller branches across southern Germany and Austria, which were all collectively known as Dachau.

The system also included camps in central and northern Germany such as Buchenwald and Sachsenhausen.

It was the first and major site of the horrific scientific experiments carried out by the Nazis on inmates, including sudden changes in atmospheric pressure, administering various drugs and infecting prisoners with diseases.

Among the grim discoveries made by the soldiers, were train carriages filled with Jews who had died on their way to the camp and were left to decompose.

After liberation, the camp was used by the US Army as an internment camp.

It was also the site of the Dachau Trials, for German war criminals, between November 1945 and August 1948.

Israeli pilots will also take part in aerial manoeuvres with Germany and other NATO members during the deployment.

Germany and Israel have stepped up their military cooperation in recent years, with the Luftwaffe taking part in joint exercises in the Israeli Negev desert in 2019.

But the landmark Israeli visit to Germany is heavy with history.

Tuesday’s commemorations will start with a joint fly-past over the Fuerstenfeldbruck airbase outside Munich where nine members of the 1972 Israeli Olympic team were killed in a shootout after being taken hostage by Palestinian militants.

The gunmen had earlier already shot dead an Israeli coach and athlete at the Olympic Village.

They were murdered ‘by a common enemy of Israel and Germany: terror’, an Israeli air force officer who asked to be identified only as ‘Major T’ told AFP.

The German and Israeli jets will then continue on to nearby Dachau where they will fly low over the Nazi death camp that was built in 1933 and served as a model for other concentration camps.

More than 40,000 Jews were killed at Dachau during World War II.

It will be ‘a very moving event for everyone’, said Major T, whose own grandfather was a Holocaust survivor.

The flyover will be followed by a wreath-laying ceremony at Dachau to be attended by IAF commander Amikam Norkin and his German counterpart Gerhartz, as well as German Defence Minister Annegret Kramp-Karrenbauer and the Israeli ambassador to Germany, Jeremy Issacharoff.

An Israeli officer, the grandson of a Dachau survivor, will give a speech.

The homage comes as Germany grapples with an upsurge in anti-Semitic and far-right violence, 75 years after the defeat of the Nazi regime. 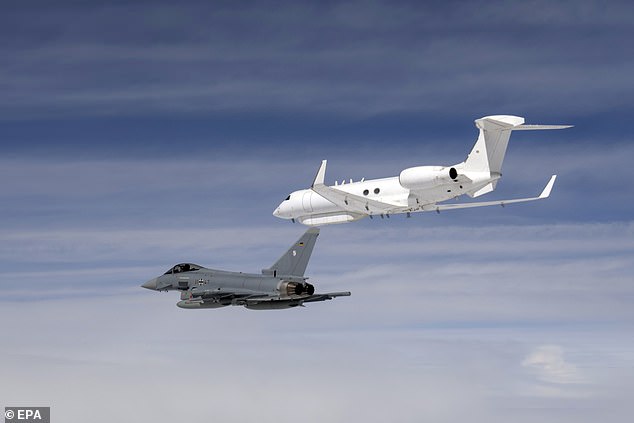 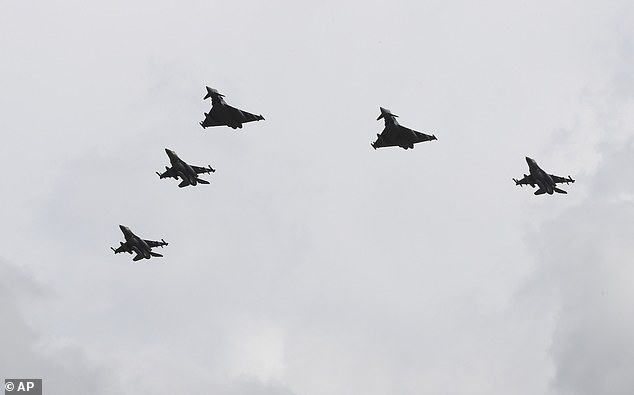 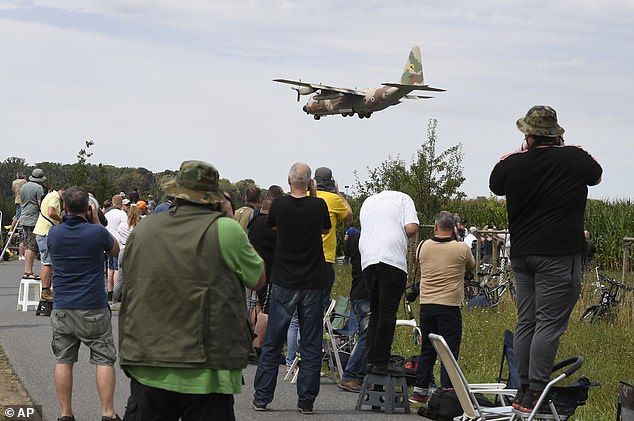 Enthusiasts take photos of an Israeli Hercules C-130 transport plane at the Noervenich airbase in the district Dueren, Germany, Monday, Aug. 17, 2020. Israeli forces arrive at the airbase for joint military exercises with the German forces Bundeswehr. 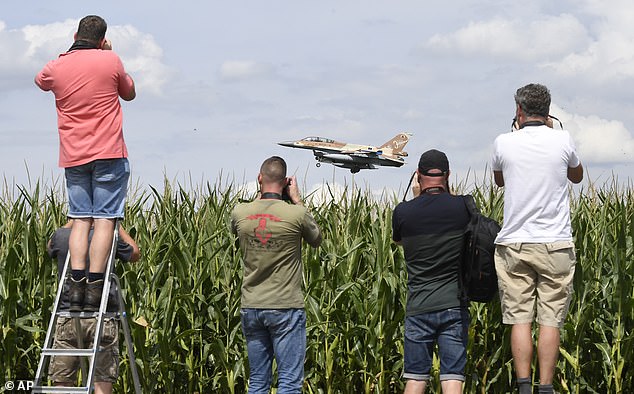 In the eastern city of Halle last year, a neo-Nazi shot dead two people after trying but failing to storm a synagogue.

In June, Kramp-Karrenbauer ordered the partial dissolution of Germany’s elite KSK commando force after revelations that some of its members harboured neo-Nazi sympathies.

It began on the morning of September 5, 1972, with six days left in the Games, when eight terrorists stormed the Olympic village and raided the Israeli contingent’s apartment.

Two Israeli athletes were killed and nine more were seized as hostages by the Black September Organization.

They demanded the release of more than 200 Palestinians serving time in Israeli jails, along with two renowned German terrorists.

After a day of unsuccessful negotiations, the terrorists collected the hostages and headed for the Fürstenfeldbruck Air Base in Munich for a flight back to the Middle East.

At the airport, German sharpshooters opened fire, killing three of the Palestinians.

A horrifying gun battle ensued, claiming the lives of all nine of the hostages and two terrorists on board a helicopter, as well as a West German police officer. 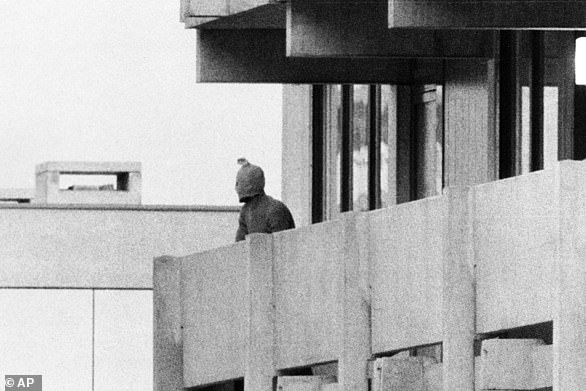 On Sept. 5, 1972, a Palestinian terror group seizes the Israeli Olympic team quarters at the Olympic Village in Munich, Germany. A member of the terror group is seen here as he appears with a hood over his face on the balcony of the building, where they hold several Israeli athletes hostage