Home » World News » ‘It doesn’t have the same bustle’: Workers reflect on the city’s changed face as Melbourne unmasks

Morella Huo still wears a mask as she walks through the quiet streets of Melbourne’s CBD. She’s relieved restrictions are continuing to ease but also a little nervous about case numbers rising.

“Most people are not wearing masks,” she said.

Workers return to the city as almost all COVID-19 restrictions lift.

The 26-year-old works in marketing and has been working from her city office for the past month. She previously worked in journalism but found it stressful. “I got tired of reading all the news about the pandemic,” she said.

On Friday, Victoria’s vaccinated residents woke to a further easing of coronavirus restrictions that will take them significantly closer to life before the pandemic.

From today, a Victorian’s vaccination status will determine what they can do after Premier Daniel Andrews revealed a raft of new freedoms – including the removal of most mask, home visitor, and density restrictions – for residents who have had two doses of coronavirus vaccine.

Under the changes, masks will no longer be required at work or in restaurants and there will be no limits on the number of guests allowed in a private home.

However, companies and landlords don’t expect workers to return to Mebourne’s CBD in large numbers until February, despite the changes and a directive for public servants to work on-site three days per week.

Ms Huo has been back in the CBD for some time, enjoying eating out at Melbourne restaurants over the past few weeks. She plans to attend some open for inspections for new rentals this weekend.

It was difficult to find a seat at Journal Canteen on Friday morning, with the Flinders Street cafe finally experiencing a morning rush of diners eager for their caffeine fix. 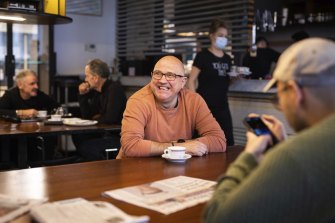 Johnny Vakalis is thrilled to reopen without customers needing to wear masks.Credit:Paul Jeffers

“It’s a great day,” said Johnny Vakalis, who has owned the cafe for 17 years.

He said the removal of capacity limits on hospitality venues would allow him to start clawing back months of lost earnings.

He had previously only been allowed 20 patrons indoors and 15 outside but his venue can accommodate up to 80 patrons.

“It makes a big difference, money wise as well,” he said. “There’s a long way to catch up.”

While he’s hopeful the further easing of restrictions will encourage people to return to the city, he’s concerned many office workers won’t return for some time.

“I speak to a lot of people in the office sector and a lot of them won’t come back until next year. It’s too close to Christmas. We’re relying on a bit of tourism, from NSW, ACT and regional Victoria.”

“I speak to a lot of people in the office sector and a lot of them won’t come back until next year.”

Tears well in Mr Vakalis’ eyes as he speaks about how he almost closed his business during Melbourne’s second lockdown last year.

But he said loyal customers kept him going, even though his business was bringing in just a couple of hundred dollars a day.

“I’m glad I hung in there,” he said. “Hopefully we can start moving forward.”

Eric Brotchie is starting a new job at the perfect time. On Friday morning he headed into the city, clutching a cup of coffee, to sort out IT for his new role in the public service. He’s looking forward to meeting his colleagues in person. 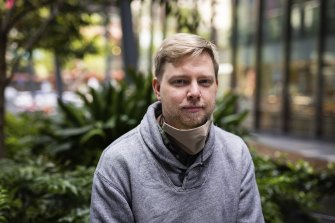 “I love coming into the city, now it’s a novelty,” he said. “You see new faces, new people. But it’s very different. It doesn’t have the same bustle that it used to.”

“It’s very different. It doesn’t have the same bustle that it used to.”

He said Thursday’s announcement about the further loosening of restrictions had taken him by surprise. “It happened quite suddenly,” he said. He has two young children so doesn’t have plans to hit the dance floor this weekend. “I’ll be catching with family,” he said.

The easing of restrictions won’t make much of a difference to Michael Togias, owner of city cafe Mr Tulk. 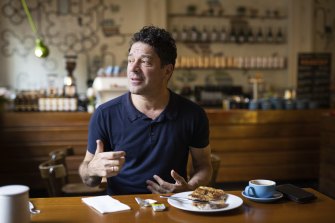 He said his spacious cafe had never hit previous capacity limits, so removing these restrictions would have a minimal impact. “Nothing is changing for us,” he said, tucking into a piece of fruit toast at his Swanston Street eatery. “We still have to wear masks.“

He said customers’ confidence had been dealt a blow and it would take a long time for them to feel comfortable returning to the city. “There’s no doubt society has changed,” he said.

“It’s little things like a hug or handshake. Those have gone.”

He doesn’t expect business to return to pre-pandemic levels until at least February. “The loosening of restrictions are positive but it will take time for people’s confidence to come back.”

Discord, a Chat App for Gamers, Said to Have Discussed Deal With Microsoft