For people of a certain generation, "Triller money" might sound like a garbled reference to the profits from Michael Jackson's record-breaking 1982 album.

But the term describes something entirely more Millennial: the (rented) mansions, cars and cash incentives given to stars of the booming social media video app TikTok if they switch to its closest American-owned analogue, Triller. 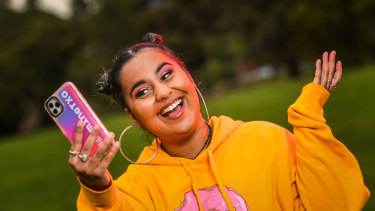 Jasmine Txo, an Australian TikTok star, wants to make sure her social media following is spread across platforms.Credit:Justin McManus

The company, which claims 65 million monthly active users, has financial backing from music industry heavyweights including Snoop Dogg and The Weeknd. But perhaps its most potent supporter is political: Donald Trump jnr.

"I've seen all of the controversy as of these days about TikTok … just because of its obvious control by the Chinese government and I said we have to address that," he said in his first Triller video last month. "I know there's some outrage about it because people have liked the platform but you know what? There's an option you can go to that's an American company." 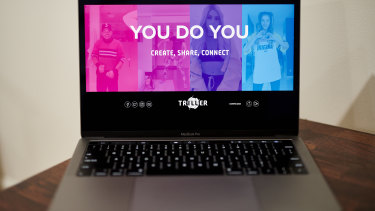 Triller has reported huge growth in recent years and even offered to buy TikTok as Donald Trump mulled forcing its sale to an American company.Credit:Bloomberg

Triller, he said, would not steal data or turn on microphones of children's iPhones to surveil them. TikTok is ultimately owned by a Chinese company, prompting security concerns, but there is no evidence the microphone tampering claims are true. In a submission to a parliamentary inquiry, TikTok said it has never given the Chinese government any access to Australians' data.

Nonetheless, his endorsement and his father's pending TikTok ban have led to a surge in interest in Triller, which is privately owned by a group of investors and works similarly to its rival, with an automatic feed of short videos mostly set to music.

Another factor has been influential groups like the Sway House – a collective of late teens and early 20s heart-throbs who have some of the biggest followings on TikTok – opening Triller accounts in return for subsidies toward their expensive Los Angeles lifestyles.

The company, which did not respond to requests for comment by deadline, has not yet hit Australia in the same way. It has bounced around the Australian Apple App Store's photo and video category charts between number five and 70 in recent days, behind giants such as Instagram, Snapchat and YouTube. 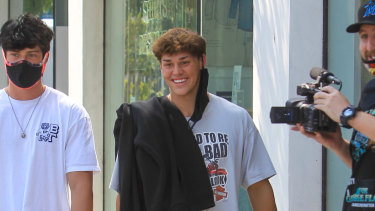 Noah Beck, centre, one of the TikTok personalities who has started posting on Triller.Credit:Getty

But that could change. Clare Winterbourn, the founder of Born Bred Talent, Australia's largest TikTok influencer agency, has been telling her clients to set up accounts on multiple platforms so their eggs are not all in one basket.

"I think a lot will start to grow their presence on the platform," Ms Winterbourn said. "Because there is that underlying fear that TikTok will disappear, a lot of the full-time creators are looking at Triller as a plan B for career protection."

TikTok has been banned in India, though Prime Minister Scott Morrison has said he is not looking at doing the same in Australia.

Jasmine Txo is among the influencers considering Triller. Over the past three months the 21-year-old Melburnian's TikTok following has exploded from 1.4 million to 2.8 million people watching her short comedy and dance videos.

"It's important to just keep diversifying and make sure that you're across as many platforms as possible," said Ms Txo (her online name).

For now she has not jumped into Triller because each app from YouTube to Instagram and TikTok already demands different content formats: longer videos, photos or pedestrian daily updates and short comedic or dance hits respectively. Another one could be draining, she said.

Besides, Ms Txo likes TikTok – it's a place where, geopolitical tensions aside, she can "spread smiles".

Julia & Sheridan’s Relationship Might Not Have Ended With ‘Bachelor: LTYH’

'The Middle': How Old is Brick Heck Actor Atticus Shaffer and What's He Been Up to Since the Series Ended?

The Chase: Bradley Walsh hits out at team for losing £60k ‘That’s what you needed!’

Thinking of upgrading your Samsung 4K TV? Why you might want to wait until next month