Home » World News » It’s your duty to back the PM, Liam Fox says in rebuke to Tories

It’s your duty to back the PM, Liam Fox says in stinging rebuke to rebel Tories planning to vote down her Brexit plan

Liam Fox will today issue a stinging rebuke to Tories who oppose the Prime Minister’s Brexit deal amid claims that as many as 100 of the party’s MPs could now vote against it.

The International Trade Secretary will accuse them of not facing up to the ‘tough choices’ that Theresa May has had to make in the negotiations.

And he will warn Conservative MPs that they have an ‘abiding duty’ to act in the best interests of the country.

Dr Fox will become the latest Cabinet Brexiteer to come out in support of Mrs May’s agreement ahead of the meaningful vote on December 11. The Mail revealed yesterday that Andrea Leadsom is also backing the deal.

But the scale of the task was illustrated last night by reports that 100 Tory MPs are now preparing to vote against the agreement, a number which would appear to give it little chance of passing the Commons. 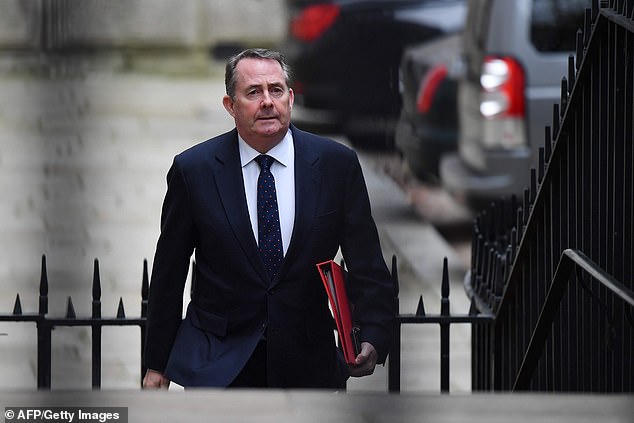 Matthew Offord became the latest to say he planned to vote against the Prime Minister’s plan. The MP for Hendon said he ‘could not support a deal’ which handed over £39billion ‘without certainty of a future trading relationship.’ According to unofficial estimates and a list collated by the website Buzzfeed, that took the number of Tory opponents to 100. However, in a Daily Mail survey of those on the list earlier this week, several indicated that they were still undecided.

Mrs May did receive a boost last night when the Remainer Tory MP Antoinette Sandbach said she would back the deal. She said that, while the deal was not perfect, ‘no one could have done better’ and voting against it would be ‘hugely destructive’. The latest developments came as:

■Mrs May launched a frantic bid to sell her Brexit deal to world leaders at the G20 summit in Argentina;

■Bank of England Governor Mark Carney warned that more than half of UK firms were completely unprepared for a no-deal Brexit;

■Security Minister Ben Wallace said quitting the EU without a deal would leave the UK more vulnerable to terrorist attack;

■The PM’s de-facto deputy David Lidington warned that a second Brexit referendum would run the risk of the ‘radicalisation’ of right wing voters in the UK;

■Justine Greening claimed Britain could hold a new referendum by the end of May. The former education secretary said that if the PM’s deal is voted down, organising a referendum could begin immediately.

Miss Greening suggested the referendum could have three choices – Remain, Brexit with Mrs May’s deal, or leaving with no deal. She said: ‘You could plan and hold a referendum in 22 weeks.’

Mr Fox will today offer his full backing to the Prime Minister when he tells an audience that though her deal won’t please everyone, it provides a ‘firm and stable base’ on which to leave the EU.

He is due to outline Britain’s global trade role, saying it is ‘time to raise our sights, and acknowledge there is a world beyond Europe, and a time beyond Brexit’.

Dr Fox was reported to be among a group of five Cabinet ministers seeking to tweak Mrs May’s Withdrawal Agreement before MPs vote on December 11. In his speech he will appeal for unity, saying: ‘Now is the time to set aside our differences, and lead our country to a future of freedom, success, and prosperity. In politics we cannot always have the luxury of doing what we want for ourselves, but we have an abiding duty to do what is right for our country.’

News that she has won over Antoinette Sandbach is a significant win for Mrs May because she is one of Parliament’s prominent Remainers and it suggests she may win over others.

Miss Sandbach said: ‘The Prime Minister has done remarkable work putting together a compromise as good as this. The agreement does not give any one group everything they want, but it does have something for everyone.’

Mrs Leadsom’s support suggests backing from the other side of the Brexit spectrum. Yesterday, arch-Brexiteer Mr Gove offered his support, telling the Commons that the Government’s deal on fisheries had caused ‘anger’ in Paris. 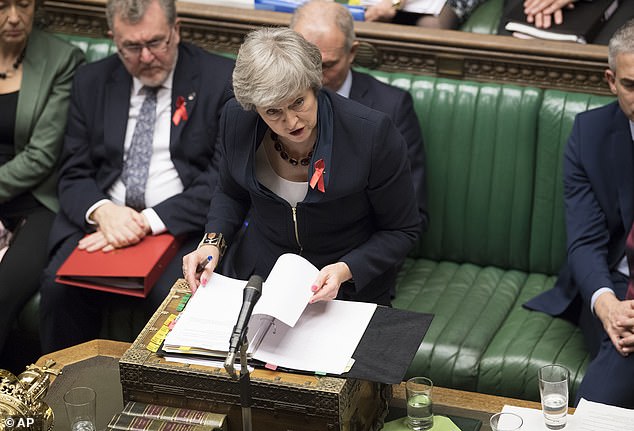 He said: ‘As an independent coastal state we will be able to decide who comes into our waters and on what terms.’

Mrs May will become the first British PM ever to visit Buenos Aires. She was stung by criticism from Donald Trump this week, who said her proposals were ‘a good deal for the EU’.

But Downing Street said Mrs May would now use the meeting of leaders from the world’s biggest economies to stress the fact her deal would allow the UK to develop an ‘independent trade policy’.

Mr Lidington warned that with former English Defence League leader Tommy Robinson now a ‘standard bearer’ for many on the far-Right, there could be an ‘ugly’ reaction to a second referendum.

Such a move could be seen as an ‘attempt by the political elite to set aside a democratic verdict’, he warned. ‘That would pose a risk of a radicalisation.’

It came as reports emerged that Mrs May’s Brexit adviser Olly Robbins has reportedly drawn up a secret blueprint to let Britain unilaterally abandon guarantees over the Irish border.

A No 10 spokesman said it would not comment on leaks.