Stephen Loosely said to me years ago “Brother, in Australian politics, money doesn’t talk, it screams!” It wasn’t that he told me anything new. It’s more that Stephen Loosely has a way with words: eloquent, to the point, balanced and truthful. Time with Loosley is best spent listening.

More to the point, Loosley – former ALP senator for NSW, former general secretary of the ALP, intellectual and practitioner – is an insider’s insider. He knows where the bodies are buried. He knows the uncomfortable home truths about his own party and knows more than some of the home truths about the other parties. 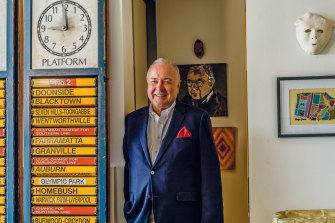 Michael Yabsley: “My agenda is now to push for change, as hard as I have pushed for tens of millions of dollars in political donations over the decades.”Credit:Tim Bauer

Across the political spectrum, there is no more uncomfortable home truth than the grubby subject of money, whether from the private or public purse.

At preselection, the ability to raise the loot is an unofficial KPI. Make no mistake, preselectors love to find a good fundraiser as the next candidate. There is also a reasonable assumption that fundraising skills reflect broader political skills. True enough.

Show me an MP who is good at fundraising who has not showcased this skill before their assembled preselectors. 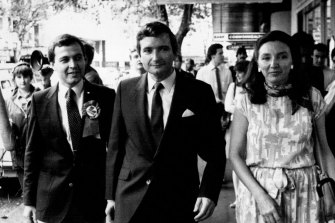 Michael Yabsley, left, in 1984, with the then-NSW Liberal leader Nick Greiner and his wife Kathryn.Credit:Paul Matthews

Yes, I am a political fundraising insider. It’s a pretty small club.

Many good people work in bad environments where they have reservations about the efficacy and even the morality of the work they are doing – even voluntary work. What they choose to do about that is up to them. Some prefer to walk away. Others become whistleblowers. Others work quietly to right wrongs. We would live in a worse world if people who have been part of a flawed system did not speak up.

For my part, from the world of political fundraising I’m comfortable to be a self-confessed “poacher turned gamekeeper”. My agenda is to push for change, as hard as I have pushed for tens of millions of dollars in political donations over the decades.

This week, the Independent Commission Against Corruption is focusing its attention on whether two grants of public money were awarded to community organisations in Wagga Wagga in breach of public trust, but let’s not forget that political donations have been at the heart of many of its investigations and that while the existing system remains, this will not change. 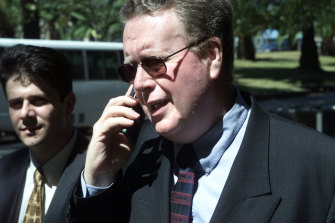 Nearly 50 years of tweaking and tinkering at the edges have given us a political fundraising regime that has erred heavily on the side of seeing the rivers of gold flow, albeit with relatively declining volume. Remarkably little meaningful attempt was made to protect the integrity of the political system and the institutions that comprise it.

Over many decades, hundreds of millions of dollars have been donated to parties across the political spectrum, from left to right, including the smaller parties and some independents. Predictably, the major parties are the major beneficiaries. It’s worth pointing out that the largest political donation ever made at the time was to the Greens in 2010. That was a donation of $1.6 million by Wotif founder Graeme Wood.

There are very few saints in this game. Maybe none. The Graeme Wood donation is noteworthy especially because it went to the Greens — the party that has protested more than any other about the need to reform the system.

Let’s be clear. Essentially, we are not talking about bags of laundered cash being handed to MPs or the parties they represent, although gaol time has been served by some who crossed that line and got caught. At the heart of political fundraising is a more subtle form of “soft corruption”. It’s more about being seen at the right functions and having the right ministers know “we were prepared to invest in the democratic system”.

To be fair, most who donate do not have an expectation of a return. Yes, there are many altruistic donors giving to a range of parties. The problem is that some do have an expectation of a return. At another level, the debate continues whether – fairly or unfairly – a government decision that favourably affects a donor can ever pass the smell test.

Nor is public funding the solution, except to the parties’ problem of declining donation levels from private sources. The truth is that public funding is an appalling rort against the Australian taxpayer. Why should political parties get a royalty for every vote they receive? In many respects, public funding is a more serious rort than anything that may come from private donors for the simple reason it is taxpayer’s money.

Private donors can work out their own greed or stupidity. Taxpayer money should not be a de facto partner in this game.

Australia has a lofty place on the world stage when it comes to standards of governance, transparency and accountability in both public and private sectors. So why should the blemish, the dark cloud of political fundraising, be tolerated?

Surely in our informed, contemporary, open and accountable democracy, we are beyond being told “well, it’s been like this for 50 years and both sides do it, so it’s not really a big deal”.

This is a big deal. Daily, our system of political fundraising insidiously eats away at the credibility of Australia’s otherwise relatively pristine democracy. This virus is edging us closer to the Americanisation of Australian politics.

So how do we break the appalling optics and practices surrounding political donations?

There is a solution, and it involves the national cabinet. This will only work if federal, state and territory governments face up to and own the damage done by a flawed system of political donations and public funding.

The reforms should not mean that a business leader, trade unionist, high net worth individual or manual worker are not allowed to donate. Let anyone on the electoral roll donate, capped at a modest amount. It’s the companies, unions and employer entities that should be shut out.

For once, political parties would have to get off their backsides to raise the money from the individuals who actually vote rather than rely on traditional rivers of gold from entities.

These reforms require Australian political parties to sever the umbilical cord with their traditional financial backers. Only then will this stain on the integrity of our democracy be addressed.

Business, unions, industry associations and the community need to vent the concerns about political fundraising that have been making them queasy for decades. The onus is on insiders such as me to blow the whistle on this entrenched soft corruption.

“Good luck with all of that,” I hear the seasoned wise heads say.

If we don’t vaccinate against this virus, Stephen Loosley will remind me in decades to come “Brother, the money is still screaming”.

Michael Yabsley was a minister in the Greiner government and a federal treasurer of the Liberal Party.