Jimmy Kimmel was called out for his ‘white privilege’ after quipping that he would report fellow comedian John Oliver to ICE during the 72nd Primetime Emmy Awards.

The Emmy Awards kicked off on Sunday in an unusual way as nominees dressed to the nines and set up cameras inside their homes to attend the virtual ceremony.

The Academy of Television Arts & Sciences once again tapped Kimmel to host the award show after two previous stints in 2012 and 2016.

But on Sunday, Kimmel upset some viewers when he made a joke about the U.S. Immigration and Customs Enforcement and John Oliver.

Each year, Oliver’s late-night talk show has scooped the Emmy Award and beaten Jimmy Kimmel Live in the process.

After losing this year, Kimmel applauded the Englishman with a joke that fell flat.

‘Congratulations again to John Oliver, I will be reporting him to ICE,’ said Kimmel.

Soon after, many viewers took to Twitter to express their displeasure over the joke amid reports that immigrant women in a Georgia facility allegedly underwent ‘mass hysterectomies.’ 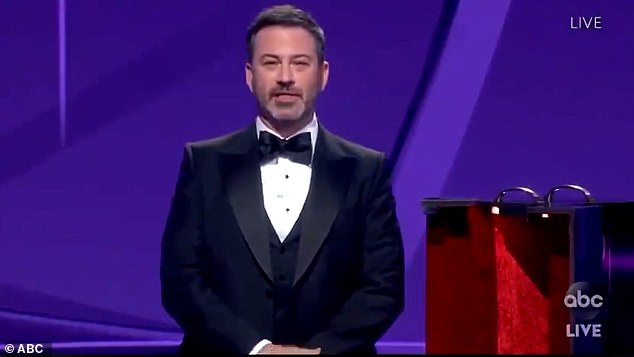 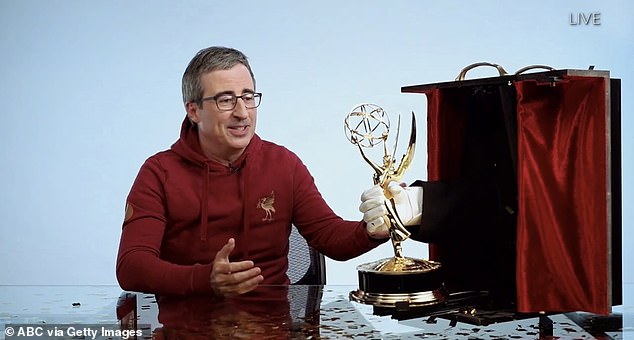 ‘The amount of white privilege it took for jimmy kimmel to get up on stage at a nationally televised event and make a joke about ice and have not one tell him that that isn’t okay, is absolutely astonishing to me,’ one person wrote on Twitter.

‘@Jimmykimmel @The Emmy’s what’s so funny about ice?’

Another Twitter user admitted they ‘don’t think Kimmel is all that funny.

‘Particularly when he jokes about ICE and the systemic terror that they cause, or any of his other highly weird jokes.

One person noted that it was Hispanic Heritage Month and Kimmel’s joke came amid a small Latinx representation at the Emmy Awards.

‘Happy Hispanic Heritage Month from the #Emmy’s where the only Latinx representation we got  was Count von Count ft. Lin Manual [and] America Ferrera presenting an award and Jimmy Kimmel’s tasteless and hurtful ICE joke,’ they wrote.

‘Happy Hispanic Heritage Month from the #Emmy’s where the only Latinx representation we got was Count von Count ft. Lin Manual [and] America Ferrera presenting an award and Jimmy Kimmel’s tasteless and hurtful ICE joke’

Other shared similar sentiments by pointing out that families have faced deportations by ICE and that it’s no laughing matter.

‘My dad was deported. He was literally placed on a plane with two federal agents. He was in chains. He was dropped off at Heathrow Airport and that’s it,’ one person wrote.

One person wrote that Ice was ‘tearing families apart’ and another wondered how Kimmel could make the joke ‘in this political climate.’

Charlotte Clymer, an activist and writer, summarized the internet’s thoughts by saying: ‘Ewwww…Jimmy Kimmel. No jokes about calling ICE, please. Thanks.’

A Twitter user found that Kimmel’s joke was inappropriate and asked ‘what’s so funny about people tearing families apart?’

Twitter user: Jimmy kimme; making an ICE joke in this political climate???  yeah he did not think this through

Last week, a whistleblower who previously worked at an ICE facility in Georgia filed a complaint to the Department of Homeland Security claiming that ”mass hysterectomies’ were performed on immigrant women.

Dawn Wooten, a former nurse at Irwin County Detention Center in Ocilla, acknowledged in the complaint that some woman may have required hysterectomies but ‘everybody’s uterus cannot be that bad.’

She testified that the immigrant women were referred to an unidentified doctor outside the detention center for ‘high rate of hysterectomies’ and many women did not understand why the procedure was done.

‘Everybody he sees has a hysterectomy – just about everybody,’ Wooten said. ‘He’s even taken out the wrong ovary on a young lady.’

ICE said in a statement that just two woman had been referred to an outside gynecologist for hysterectomies since 2018.

The Office of the Inspector General opened an investigation into the matter.

Who is Eric Swalwell's wife?