The Centres for Disease Control and Prevention (CDC) and the Food and Drug Administration (FDA) announced a “pause” on the Johnson & Johnson vaccine while they investigate clots in six women that occurred days after being vaccinated. 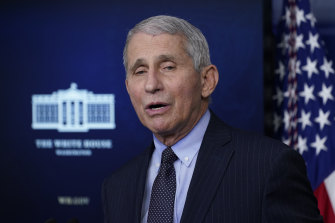 “This announcement will not have a significant impact on our vaccination program,” White House COVID-19 co-ordinator Jeff Zients said at a press briefing.

“We have enough doses of Pfizer and Moderna to hit the targets we’ve set.”

The Biden administration still expects to hit its goal of 200 million vaccinations by the end of the month, he said.

Zients said the Biden administration was working to ensure that Americans with a Johnson & Johnson appointment could quickly receive a Pfizer or Moderna shot instead.

The move has already had a global impact, as Johnson & Johnson announced a suspension of the company’s plans to roll out the vaccine in Europe.

Biden’s top medical adviser Anthony Fauci stressed that, given six clotting cases have been identified and around seven million Johnson & Johnson doses have been administered, the chance of any serious side effects appeared to be less than one in a million.

Nevertheless, he said it was important for health experts to investigate the clotting issue and make recommendations to medical staff and the American public.

“We want to get this worked out as quickly as we possibly can,” he said.

The women were between the ages of 18 and 48 and experienced symptoms six to 13 days after vaccination. One woman died, and another remains in critical condition, federal health officials said.

Fauci said there had been no “red flag signals” for the Pfizer and Moderna vaccines, which are the most widely used vaccines in the US.

The Johnson & Johnson vaccine is based on the adenovirus technology, as is the AstraZeneca shot which has also been linked to extremely rare cases of blood clots. The Moderna and Pfizer vaccines use a different technology known as mRNA.

Health experts from the FDA and CDC earlier said they expected the pause on the Johnson & Johnson vaccine to last for a “a matter of days”.

One possibility being examined is whether certain demographics – for example, women aged under 50 – should be directed to take the Pfizer and Moderna vaccine rather than the Johnson & Johnson.

The Morrison government this week revealed that it would not seek to purchase the Johnson & Johnson vaccine for use in Australia because it was too similar to the AstraZeneca jab.

'The View:' Former Panelist Rosie Perez Had a Hard Time Telling Two Co-Hosts She Was Leaving The Show

The Voice's Season 15 Winner Will Be…