Washington: While President Donald Trump's reelection bid has been upended by his COVID-19 diagnosis, his challenger Joe Biden kept his campaign apace, after two tests came back negative.

The former vice-president and his wife, Jill Biden, underwent PCR testing, which uses a nasal swab. Jill Biden was also negative. Trump and first lady Melania Trump revealed early on Friday that they both have the virus. 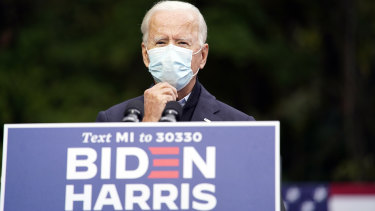 Biden returned to the trail in Michigan on Saturday AEST, while his running mate, Kamala Harris, traveled to Las Vegas.

At his sole event in Grand Rapids, Biden largely stuck to his standard stump speech, vowing to be a president who will not forget working-class communities that have been overlooked in the past. The remarks were nevertheless freighted with the news of the day, as Biden wore a mask for the event's duration and bookended his comments with well-wishes for the first family.

"This is not a matter of politics, it's a bracing reminder to all of us that we have to take this virus seriously," Biden said.

He reiterated his call for COVID-conscious practices, especially wearing a mask.

"Be patriotic. It's not about being a tough guy, it's about doing your part," he said.

Biden's negative results, however, does not mean he is in the clear. It can take several days for the virus to be detected, and experts said more testing is a must. It usually takes five or six days for symptoms to develop, according to MIT Medical, and the incubation period can be as long as 14 days.

If Biden was infected during the debate Tuesday, "you wouldn't expect him to be positive today. … I am more interested in how he tests tomorrow and Sunday and Monday," said Dr. John Swartzberg, a University of California, Berkeley infectious disease expert.

"That is when we really want to look at the test."

Earlier in the morning, Joe and Jill Biden sent best wishes to the first family for a swift recovery.

"We will continue to pray for the health and safety of the president and his family," Biden wrote.

Behind the scenes, top Biden aides were urging staff members to keep a low public profile.

"As this situation continues to unfold, we ask that you refrain from posting about the situation on social media unless otherwise directed by your manager," wrote campaign manager Jen O'Malley Dillon in a memo.

Harris, who was not in Cleveland for the first presidential debate, and her husband, Doug Emhoff, both tested negative for the virus on Friday morning.

"Doug and I join Joe Biden and Dr. Biden in wishing President Trump and the First Lady a full and speedy recovery," Harris wrote in a tweet on Friday morning. "We're keeping them and the entire Trump family in our thoughts."

At least one close associate of Biden's who was at the debate reported seeking a new coronavirus test in light of Trump's revelation.

"I was tested for COVID-19 again this morning and received a negative result," said Senator Chris Coons.

"I continue to pray for the President and first lady, for all who have been infected during this pandemic, and for all of our front-line, essential workers."

Biden and Trump have taken vastly different approaches to the pandemic.

Biden has opted against large campaign rallies, which Trump has continued to hold as recently as Wednesday.

Republicans have derided the former vice president's more limited campaign schedule, mocking him for "hiding in his basement."

The Democratic nominee has also been more assiduous about wearing a mask in public. Trump has occasionally been photographed wearing a face covering, but he had previously said it was unnecessary for him, since he and those around him are tested frequently.