A Supreme Court judge has rejected several bail conditions sought by Victoria Police to control the behaviour of anti-lockdown activist Monica Smit, labelling some unnecessary, disproportionate and without utility.

Ms Smit was granted bail in the Melbourne Magistrates Court in early September after being charged with two counts of incitement and three of breaching the Chief Health Officer’s directions, but did not leave prison after refusing to sign a bail consent form. 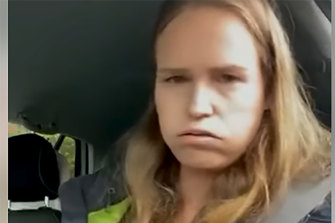 Monica Smit filmed herself during her arrest. Credit:Facebook

Magistrate Luisa Bazzani ruled on September 1 that if Ms Smit was to get bail she had to abide by a 7pm curfew, follow the Chief Health Officer’s directions and not encourage anyone to breach those directions or publish anything that might incite breaches.

Ms Smit was also told to remove any material previously published online that might incite people, to not attend protests and to wear a mask unless she had a medical exemption.

After refusing to adhere to the terms, Ms Smit spent 22 days in prison.

But Supreme Court Justice Elizabeth Hollingworth on Wednesday varied the terms of her bail, rejecting several of the original conditions sought by police and prosecutors.

Justice Hollingworth instead found Ms Smit would not need to be subject to the 7pm curfew or the requirement to remove material on her website or social media.

“The effect of those conditions is to require Ms Smit to obey the law, and not to encourage others to breach it,” Justice Hollingworth said.

Justice Hollingworth questioned whether the curfew was appropriate, saying: “There’s no particular utility in suggesting that an additional curfew for her serves any purpose”.

Ms Smit’s lawyer, Peter Chadwick, QC, told Justice Elizabeth Hollingworth that police were attempting to use laws, which place conditions on people’s behaviour when they are granted bail, to silence Ms Smit, and that conditions, such as a curfew, were onerous.

“What we submit, Your Honour, is that the conditions being sought by Victoria Police are extraneous to the Bail Act,” he said. “The reasonable view is that the Bail Act provisions are being used to effectively silence Ms Smit.” 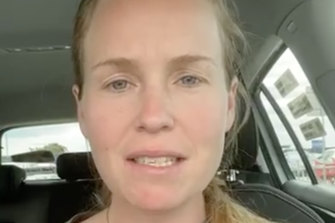 Ms Smit in an image posted on the Reignite Democracy Australia Facebook page.Credit:Facebook

“That is not a proper purpose. It is not what the Bail Act can be used for.”

Prosecutor Anthony Albore, arguing for the strict conditions, said Ms Smit was in prison by her own choice, given police did not oppose bail during her first hearing in the Magistrates Court, and it was her choice not to sign the consent form which would grant her release.

“It’s in my respectful submission, it’s a matter of choice, about why the applicant found herself in this particular position in circumstances where it was open for her to sign the conditions of bail to no longer be remanded in custody.”

During protests last Saturday, in which 10 police have been injured, six taken to hospital and 235 demonstrators arrested, demonstrators walked the streets and on several occasions chanted “free Monica Smit”.

The anti-lockdown group she helped found, Reignite Democracy Australia, told supporters to tune into the hearing, conducted remotely via livestream at the Victorian Supreme Court. At its peak, more than 6500 people were watching.

Court documents state that in the lead-up to the August 11 protest, Ms Smit posted that “lockdowns take lives” and urged people to demonstrate.

Ms Smit, a self-described journalist, was arrested in Brighton in late August, not long after filming herself talking about small-scale anti-lockdown protests.

Once Ms Smit signs the new bail orders handed down by Justice Hollingsworth she will be free to return home.

She faces a further two charges of breaching the Chief Health Officer’s directions by attending a protest in Melbourne on October 31 last year. She is next due to face court on November 10.