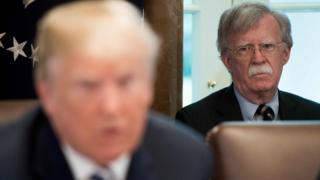 A US judge has rejected a request by the Trump administration to stop the publication of a memoir by former National Security Adviser John Bolton.

The justice department argued that the book had not been properly vetted.

Judge Royce Lamberth of the US District Court in Washington DC said Mr Bolton had “gambled” with US national security and “exposed his country to harm”.

But he ruled that the government had “failed to establish that an injunction would prevent irreparable harm”.

The new work – The Room Where It Happened – is due to go on sale on 23 June. In it, Mr Bolton paints a picture of a president whose decision-making was dominated by a desire to win the presidency again.

Many of the allegations are based on private conversations and are impossible to verify. The Trump administration has pushed back against Mr Bolton, with the president saying the book was “made up of lies and fake stories”.

Among the book’s allegations are that:

Read more on this story:

Find Out Where Robin Roberts Has Been Getting Her Super-Cute (Under-$50!) GMA Sheaths