Reuters: Harvey Weinstein's rape trial took a dramatic turn on Tuesday as the judge threatened to revoke his bail and jail the former film producer after catching him using his mobile phone just as jury selection got under way.

“Is this really the way you want to end up in jail for the rest of your life, by texting and violating a court order?” state Judge James Burke asked the 67-year-old defendant, visibly angry. He told Weinstein not to answer. 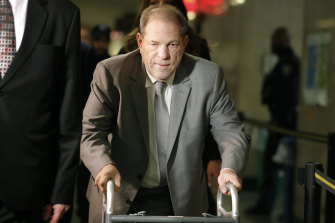 Harvey Weinstein arrives at court for the start of jury selection in Manhattan.Credit:AP

“There is a grave risk that this defendant at some point will realise that the evidence against him is imposing and overwhelming” and he will try to flee, she said.

The judge ultimately decided not to jail Weinstein but warned he would not get another chance.

The once-powerful producer has been released on bail, but is required to wear an electronic-tracking device that was visible on his ankle as he got out of a sports utility vehicle when he arrived at court on Tuesday. 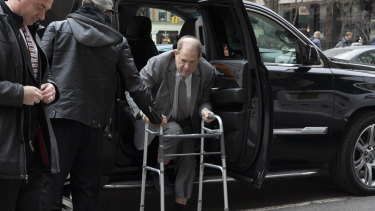 Weinstein has pleaded not guilty to charges of assaulting two women in New York. He faces life in prison if convicted on the most serious charge, predatory sexual assault.

More than 80 women have accused Weinstein of sexual misconduct dating back decades.

Weinstein has denied the allegations, saying any sexual encounters he had were consensual.

One of his lawyers, Arthur Aidala, asked the judge to delay the trial or at least allow more time for jury selection because Monday's charges would make it impossible to choose a fair and impartial jury this week.

“I cannot think of one time, one case where the day of jury selection this type of prejudice is being cast against a criminal defendant,” said Aidala, who held up copies of The New York Times, Daily News and New York Post with articles about the Los Angeles charges.

“I don’t see how anyone could answer honestly that they’re fair and impartial after this stuff is drilled into their brains,” he said.

Burke refused to delay the trial, saying the jury would be instructed that charges were not evidence of guilt.

Legal experts said the movement and Monday's charges would make jury selection challenging in the trial of Weinstein, who made his mark with low-budget, critically acclaimed films such as The English Patient and Shakespeare in Love.

"The defendant, Harvey Weinstein is a film producer," read a form with 55 questions potential jurors were asked to answer. "Can you assure all parties that you will determine this case based only on the evidence you will hear in Court?"

Lucian Chalfen, a spokesman for the Office of Court Administration, said the 2,000 jurors summoned for the Weinstein case is roughly five times the number for a typical trial. Based on past experience, about 500 were likely to show up for jury duty.

Prosecutors need all 12 jurors to back a conviction, while Weinstein needs just one holdout for a hung jury.

Experts said lawyers for Weinstein and the prosecution would need to be wary of jurors who may try to mask their bias in order to serve on a headline-grabbing trial. Some jurors may seek to use the trial as a means of advancing a personal cause.

Weinstein in October lost a bid to move the trial to suburban Long Island or to Albany, New York state’s capital. He said intense media scrutiny made it impossible for jurors to give him a fair trial in Manhattan.

The defence asked at Monday's hearing that the jury be sequestered, a request the judge denied.

Ryanair and easyJet passengers hit out after hundreds of cancellations