Juror in the case of truck driver sentenced to 110 years in prison for deadly 2019 Colorado car pile-up says sentence is ‘not right’ and is ‘100-fold of what it should’ve been’ – as 4.5 MILLION sign petition for clemency

A juror who helped convict a Texas trucker for a deadly Colorado crash says his 110-jail sentence is ‘not right,’ as a petition for clemency surpasses 4.5 million signatures.

Rogel Aguilera-Mederos, 26, was driving a semi-truck on April 25, 2019, along Interstate 70 in Lakewood, Colorado, when he slammed into two dozen vehicles – including four other transports stuck in rush-hour traffic.

He was sentenced last week on 27 criminal charges and his harsh sentence drew criticism among millions of people – including a juror who found him guilty.

‘I cried my eyes out,’ the juror, who remained anonymous, told FOX31 regarding the sentence given to Aguilera-Mederos.

The juror called the sentence ‘100-fold of what it should have been’ and said that while the trucker was responsible for the crash, Judge A. Bruce Jones should have given him a ‘more suitable sentence.’ 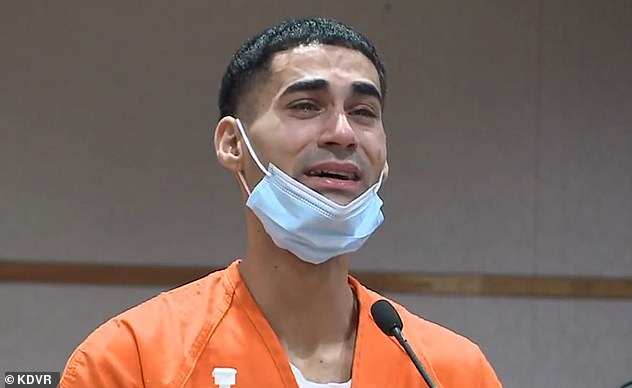 Rogel Aguilera-Mederos, 26, was driving a semi-truck on April 25, 2019, along Interstate 70 in Lakewood, Colorado, when he slammed into two dozen vehicles – including four other transports stuck in rush-hour traffic 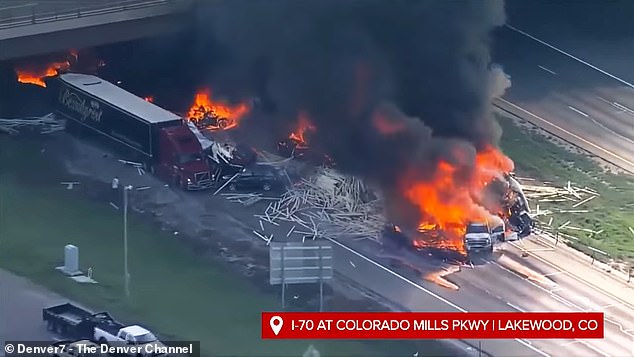 The impact caused a fireball explosion that incinerated cars and trucks, killing four people. The driver was convicted of 27 criminal counts and sentenced to 110 years

Jones has said his hands are tied due to mandatory minimum laws.

‘There is just something wrong to where a judge cannot intervene in some way and say the way this is written is not right,’ the juror added.

The juror also told FOX31 he feels for the families of the victims, but feels compelled to speak in favor of reducing Aguilera-Mederos’ sentence.

‘I don’t [think] the governor should sit there and offer him clemency and let him off,’ he said. ‘But to step in and say this would be a more suitable sentence for what had happened.’

More than 4.5 million Change.org petitioners are calling for the trucker’s sentence to be lessened.

‘Rogel Lazaro Aguilera-Mederos … has nothing on his driving record, or on his criminal history,’ says a petition addressed to Colorado Governor Jared Polis and Jefferson County courts.

The governor is the only person who can grant clemency at the state level. Polis most recently commuted four sentences and issued 18 pardons in December 2020. Clemency usually results in a sentence reduction or a pardon. 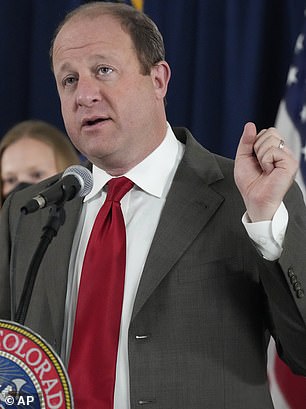 The petition goes on to say that Aguilera-Mederos could have ‘done things differently to avoid the courts,’ but ultimately commended him for taking responsibility and apologizing to the victim’s families.

It has become the website’s third most signed petition, according to the Change.org page.

During his sentencing December 13, Aguilera-Medero burst into tears.

‘I am not a criminal,’ he said. ‘I am not a murderer. I am not a killer. When I look at my charges, we are talking about a murderer, which is not me. I have never thought about hurting anybody in my entire life.’ 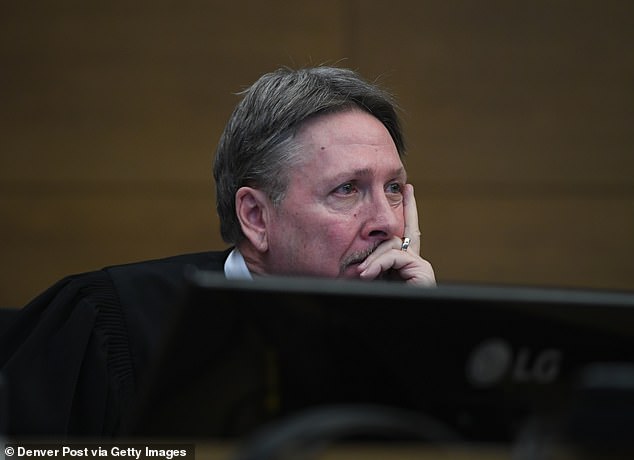 Judge A. Bruce Jones has said his hands are tied due to mandatory minimum laws.  He sentenced Aguilera-Mederos to the minimum in the range available to him on all 27 criminal counts

A Change.org petition to reduce Aguilera-Mederos’ sentence has become the website’s third most signed petitions after it reached 4.5 million signatures, according to the page 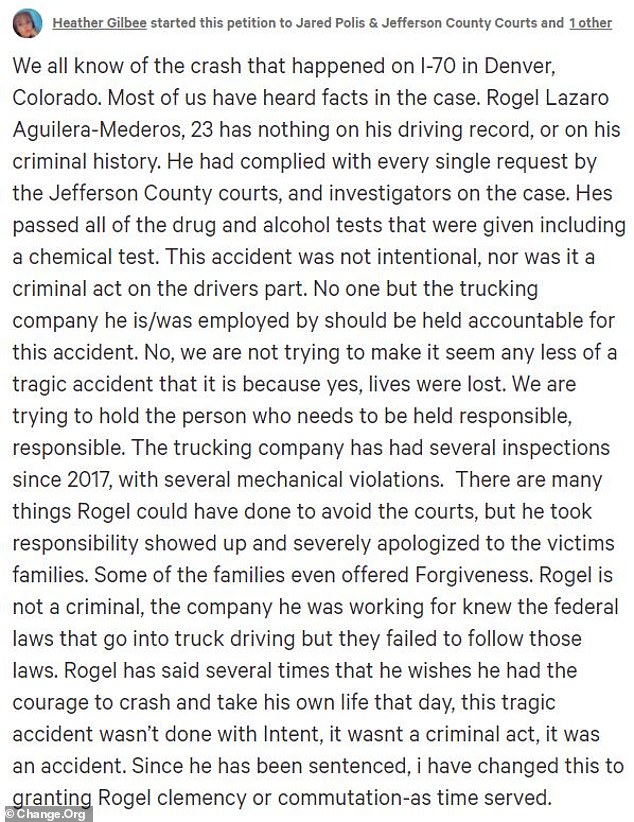 Pictured: a screenshot of the petition for Aguilera-Mederos, who was sentenced to prison for 110 consecutive for causing a fireball crash that killed four people 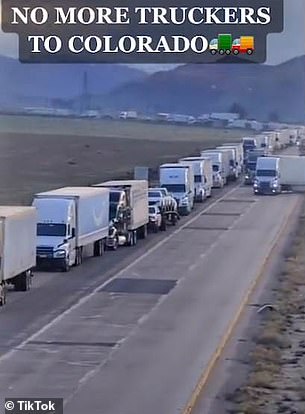 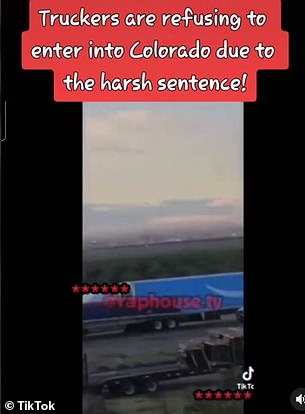 Viral TikToks reportedly show angered Colorado drivers protesting the 110-year jail sentence of a fellow driver who caused a huge crash that killed four on a Colorado interstate. It is unclear whether these are current photos.

Aguilera-Mederos claimed the brakes in his truck failed and he lost control, but prosecutors argued in court that he could have taken steps to prevent the crash, including using a runaway truck ramp miles before the wreck. He made a ‘bunch of bad decisions’ instead, they said.

On December 13, Aguilera-Mederos was sentenced to 110 consecutive years in prison by Jones, who sentenced him to the minimum in the range available to him on all 27 criminal counts, the Denver Channel reported.

The sentencing prompted a series of minor protests from truck drivers.

According to TikTok videos, truck drivers are now refusing to enter the state as a way to denounce the sentence they’ve deemed harsh and unfair.

Although the videos have gained traction in recent days, the Colorado Motor Carriers Association said on Friday they were not aware of serious attempts of a boycott.

‘I’m not seeing really anything that’s showing up of that boycott in terms of companies missing shipments or other things like that,’ Fulton told the outlet.

Fulton also said that while he feels for the driver, calling the crash a mechanical failure, as the petition states, is incorrect.

‘I think in our eyes is inexperience, a lack of familiarity with the driver of the mountains…I don’t think the company should have put them in this situation,’ he said. 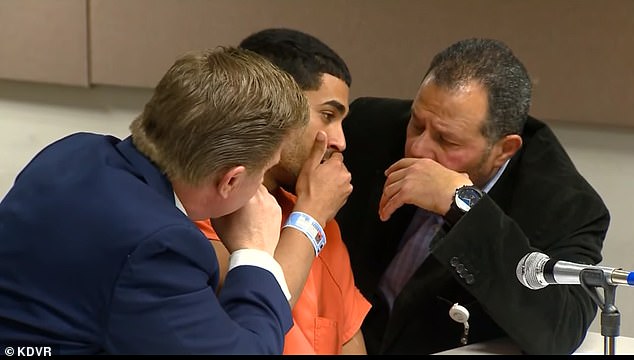 Aguilera-Mederos (pictured in a file photo) burst into tears during his sentencing, saying: ‘I am not a criminal. I am not a murderer. I am not a killer’ 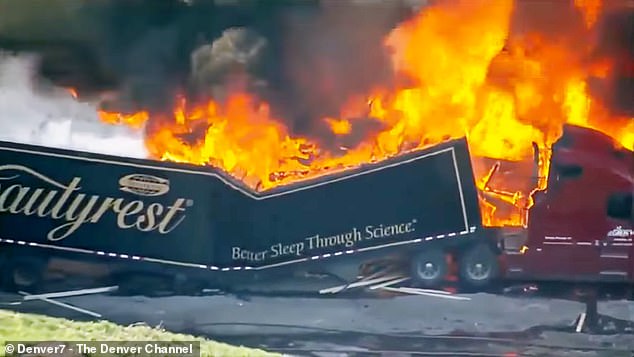 Among the vehicles he crashed into were four other semi-trucks 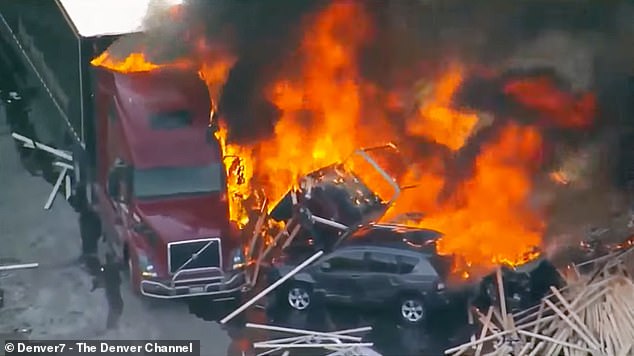 A giant fireball formed from the impact of the crash, incinerating some cars and trucks

Aguilera-Mederos was working for a Houston-based trucking company at the time of the fatal crash. He was driving an 18-wheeler loaded with lumber.

Prosecutors said he was eastbound coming down the interstate from the mountains about 85mph. They said he swerved at times, forcing others off the road before he crashed into two dozen vehicles causing a giant fireball, FOX 31 reports.

It left behind a scene of ‘significant, just unbelievable carnage,’ Lakewood Police Spokesman Ty Countryman said during a news conference following the crash, noting that some bodies were still in the wreckage hours later. Video showed cars stopped in every direction as the huge fire spread, sending smoke billowing.

‘This is looking to be one of the worst accidents we’ve had here in Lakewood,’ Countryman said.

Those killed in the crash include: Doyle Harrison, 61, of Hudson, Colorado; William Bailey, 67, of Arvadal; Miguel Angel Lamas Arrellano, 24, of Denver; and Staney Politano, 69, of Arvada.

Six others were taken to hospital. 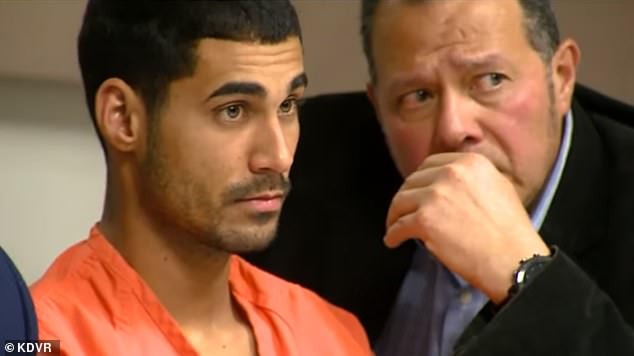 He was found guilty in October on 27 criminal charges including vehicular homicide, assault and reckless driving for a fiery crash in April 2019, and a county court judge said he had to sentence Aguilera-Mederos, pictured with his attorney, according to the state minimum 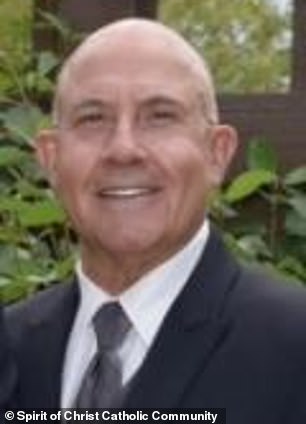 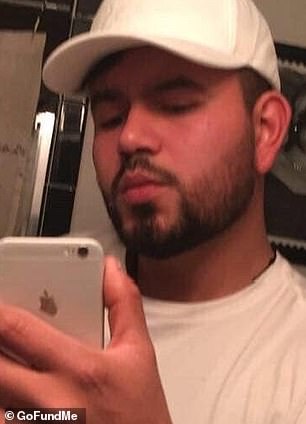 Among the victims of the deadly crash were Stanley Politano, 69, of Arvada, Colorado, left, and Miguel Angel Lamas Arrelano, 24, of Denver, right, 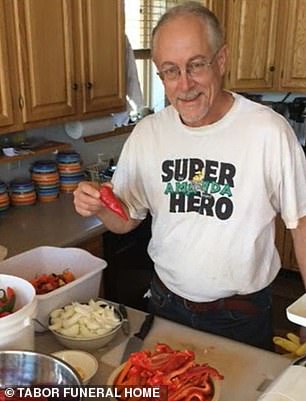 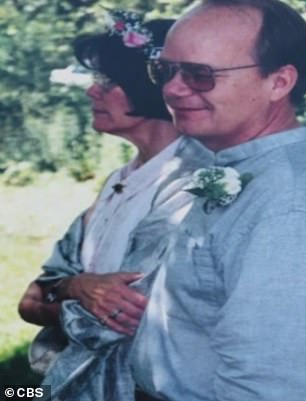 Doyle Harrison (left)  was also killed in the inferno, as was Victim William Bailey (pictured right with his wife, Gage Evans)

His defense attorney claimed he did not know that his truck brakes were smoking or that he would not be able to stop. He also argued that Aguilera-Mederos’ actions were a series of negligent decisions, and that he did not intend to hurt anybody.

But in October, a jury found him guilty  of 27 criminal charges, including:

He was also found not guilty of 15 counts of criminal attempts to commit assaults in the first degree.

Before his sentencing, Aguilera-Mederos pleaded with the judge to be lenient, breaking down in tears as he spoke.

‘It’s hard. This was a terrible accident, I know,’ he said. ‘I take the responsibility, but it was an accident.

‘I have never thought about hurting anyone in my entire life and Jesus Christ, he knows that, he knows my heart,’ he continued.

He claimed that he tried to avoid the traffic, and noted that he did not flee in the aftermath ‘because I respect the laws.

You can now listen to free podcasts on Amazon Music