Milwaukee: Democratic vice presidential nominee Kamala Harris on Monday (Tuesday AEST) met with the family of Jacob Blake, a black man who was left paralysed after being shot by police in Kenosha, Wisconsin, in August.

Harris, who landed in Milwaukee on Monday for her first trip as Democratic presidential nominee Joe Biden's running mate, met with Blake's father, two sisters and two members of his legal team. Blake's mother and other lawyers joined the meeting by phone, according to a campaign official.

Blake reportedly joined the conversation by phone, according to Bloomberg. 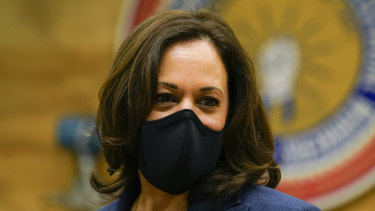 Blake was shot seven times by a white police officer in Kenosha, and his family says he is now paralysed in the hospital. Blake's shooting sparked protests and violence in the city, including the killing of two protesters by Kyle Rittenhouse in late August.

Attorney Ben Crump, representing the family of Blake said Harris’ visit with the family was “inspirational and uplifting”.

Crump says Harris spoke individually with each family member about how they were handling the shooting and urged them to take care of their physical and mental health.

Crump says Blake told Harris he was proud of her, and Harris told Blake that she was also proud of him and the way he was working through his pain.

“Jacob jnr assured her that he was not going to give up on life for the sake of his children,” Crump said.

Crump says Harris also talked about policy changes she and Biden will seek, and encouraged family members to continue to use their voices to help end systemic racism.

Harris was to meet with union and business leaders later on Monday afternoon.

Her visit comes after Biden traveled to Wisconsin on Thursday to meet with Blake’s family and participate in a community conversation at a church in Kenosha.

President Donald Trump also travelled to Kenosha last week to tour damaged properties and condemn the violence. He did not meet with the Blake family, and he declined to speak to Blake's mother, because the family wanted lawyers to take part in the call.

"I said, 'I have enough lawyers in my life, I don't need to get involved with that.'"