Sir Keir Starmer today said the most exciting thing he has ever done is go to the football with his children.

The Labour leadership frontrunner struggled to answer the question when he was asked by LBC radio host Nick Ferrari.

He initially said that he had ‘done lots of exciting things’ before pausing and then settling on playing football and going to matches with his children as his final answer.

His response prompted laughter and good-natured mockery from Mr Ferrari who then proceeded to ask if he had ever ‘stared into the eye of a tiger’.

His comments will inevitably draw comparisons to Theresa May’s response in June 2017 when she was asked to name the naughtiest thing she had ever done.

The former PM memorably said she used to ‘run through fields of wheat’ with a friend and that the local farmers ‘weren’t too pleased about that’. 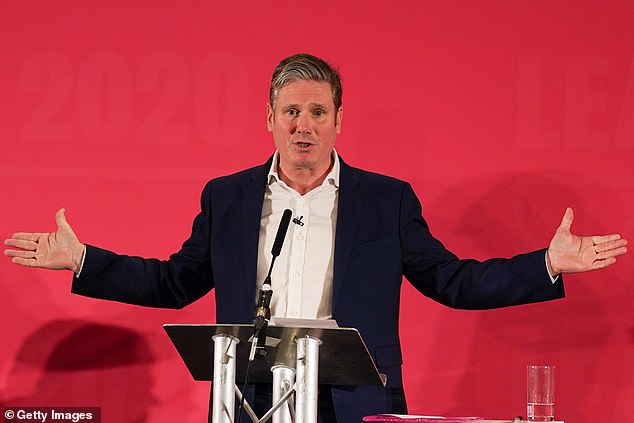 Sir Keir Starmer, pictured at a Labour leadership event in Durham yesterday, today struggled to name the most exciting thing he has ever done

Sir Keir was asked what the ‘most exiting thing’ he had ever done was after the Financial Times published a profile of him which labelled him ‘boring’.

He replied: ‘Oh I’ve done lots of exciting things. You know. Playing football, going to football with my kids.’

Mr Ferrari then interrupted and asked: ‘Going to football with your children is the most exciting thing Sir Keir Starmer has ever done? Do you wish to revise that Sir Keir?’

A laughing Sir Keir told his host that ‘you are characterising me’ as Mr Ferrari again pressed if he wanted to change his answer.

‘I am trying to help you here!’

Sir Keir replied: ‘No, I haven’t. Look, there are all sorts of descriptions people give to candidates, left, right and centre.’

He added: ‘I have done like most campaigners which is knocked on someone’s door and someone answers and they are half naked and all the rest of it.’

He then tried to save the situation as he told a story about life on the campaign trail.

‘We were on our way up to Glasgow for some hustings, Friday now, because we got stuck in Newcastle, all the trains couldn’t move out of Newcastle, it was Friday night and it is Valentine’s night and we haven’t got a room,’ he said.

‘So we go across to the hotel and eventually a room is rustled up, a small room, they give me the key and I am quite relieved.

Asked who was in the bed, he laughed and said: ‘I didn’t get that far because when I saw someone was in the bed I thought this was not the place for a conversation.’

Voting in the Labour leadership contest started today and will close on April 2. A winner will be announced on April 4.

'We are facing biggest financial crash for 100 years', economists warn