Knife-wielding woman, 28, who attacked two female shoppers in suspected terror attack at Swiss department store had formed an online relationship with a jihadi in Syria and had tried to travel there to meet him

Swiss police said today a woman at the centre of a terrorist investigation following a double knife attack had formed an online relationship with a jihadi in Syria and had attempted to travel there.

The 28-year-old woman, a Swiss citizen, was arrested after injuring two women during an attack in a department store in the southern city of Lugano yesterday.

The knife-wielding suspect allegedly sliced a shopper’s neck and tried to choke another with her hands.

One of the female victims suffered a serious injury, while the other had minor injuries and neither were in a life-threatening condition, police said. 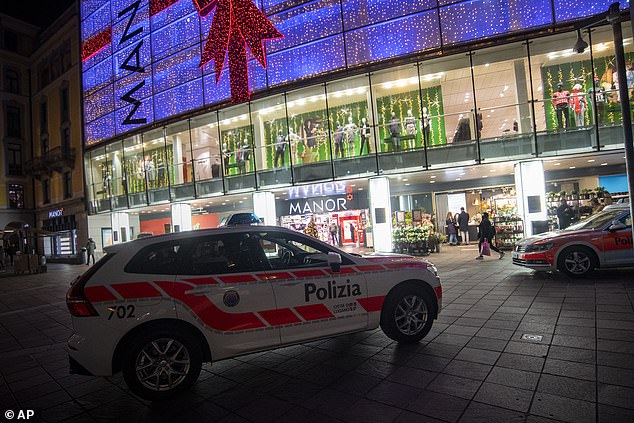 A 28-year-old Swiss national who allegedly sliced a shopper’s neck and tried to choke another at the Manor department store (pictured) in Lugano, Switzerland, yesterday before being stopped by shoppers had formed a relationship online with a jihadi in Syria and had tried to travel there

Police said the Swiss national who lived locally in the Italian-speaking Ticino region was known after being investigated for ‘jihadist terrorism’ in 2017.

Fedpol, as the police agency is known, said investigations three years ago revealed that the woman had formed a relationship on social media with a jihadist fighter in Syria.

She had attempted to travel to Syria in 2017 to meet the man, but was stopped by Turkish authorities at the Syrian border.

The woman was then sent back to Switzerland and admitted to a psychiatric clinic. 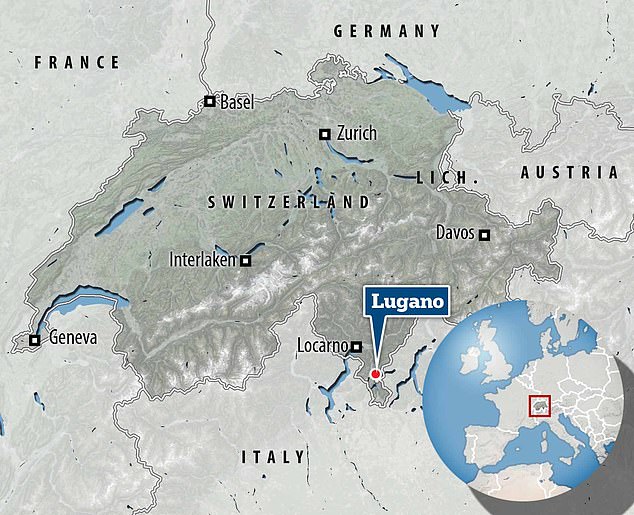 Fedpol tweeted: ‘The woman was suffering from mental health problems at this time. After returning to Switzerland, she was admitted to a psychiatric clinic.

‘Since 2017, the woman has not come to Fedpol’s attention in any investigations related to terrorist activities.’

Separately, the Swiss federal prosecutor’s office said it had opened criminal proceedings against the woman, including on charges of attempted premeditated homicide, serious bodily harm and being in violation of a ban on extremist groups such as al-Qaida and ISIS.

The suspect was arrested after being stopped by shoppers at the Manor department store in Lugano at around 2pm yesterday.

Police said they could not exclude ‘terrorist motives’ after witnesses described how she rampaged through the blood-spattered store with a large blade. 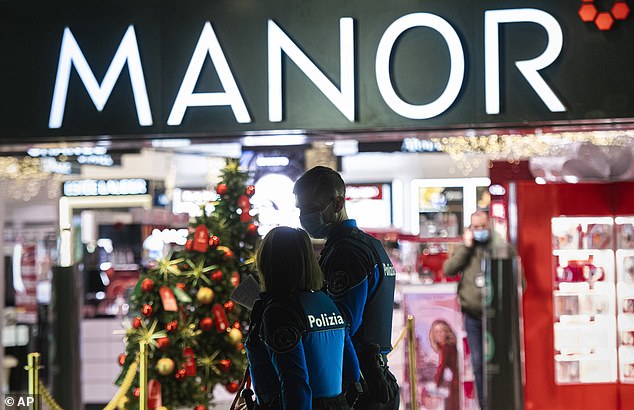 The suspect was known to police after being investigated for ‘jihadist terrorism’ back in 2017′. Pictured: Police walk past the department store last night after the stabbing earlier in the day

Ticino president Norman Gobbi thanked the shoppers who stopped the attack and condemned the ‘extreme violence, motivated by extremism’.

He said: ‘Switzerland is a country of peace, but being peaceful does not mean being helpless. We are determined to defend the safety of our citizens.’

His own country had been victim to a deadly terrorist attack in Vienna on November 2, when four people were murdered.

Initial investigations established the suspect attacked two women, first trying to choke one with her hands and then stabbing the second in the neck with a knife.

One member of staff at the Manor department store said: ‘I was at the cash desk when I heard screaming, I turned around and saw a woman on the ground covered in blood.

‘Other people were trying to hold another woman, they were holding her by the hair, I didn’t see well but she had a knife and it was big.

‘People all around were running away and there was blood everywhere. I’m shocked.’

Switzerland has identified hundreds of residents deemed a threat and militants who travelled to war zones.

Two men were arrested in the town of Winterthur near Zurich this month over alleged links to the Vienna terrorist attack. They allegedly visited the attacked in July.

In September, a man Swiss media dubbed the ‘Emir of Winterthur’ and described as a leading Islamist militant in Switzerland was sentenced to 50 months in prison for ties to Islamic State.

Federal prosecutors have said that a fatal stabbing of a Portuguese man in September in the town of Morges, in western Switzerland, was still being investigated for a possible ‘terrorist motive’.  A Swiss-Turkish national has been arrested.

How Purell cleaned up